For residents who have concerns with vehicles going to fast in their neighborhood, the Bridgeport Police Department is launching an initiative that could allow individuals in their areas to be proactive.
According to Bridgeport Police Chief John Walker, his department is teaming up with the city’s Volunteers in Police Service (VIPS) to deliver and place signs warning motorists to watch their speed.
“We get calls regularly throughout the city about speeding,” said Walker. “What this effort does is if we have a complaint or multiple complaints in an area, we’ll have the VIPS take them to certain streets where the complaints are coming from.” 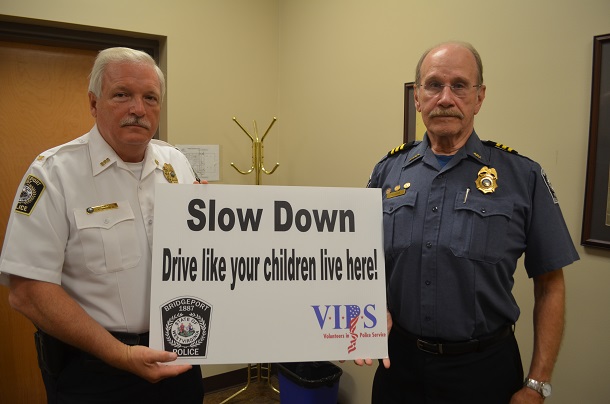 The signs are about the size of a standard political sign that adorn yards during election season. As the photo shows, they say, “Slow Down” and followed by “Drive like your children live here!”
Walker, has been working with Kerry Hess of VIPS on this, said signs won’t be randomly placed. No one will wake up to find a sign in their yard.
“We’ll knock on the doors of the residence to get permission. Once we have permission, we’ll leave the sign out for a period of approximately 30 days,” said Walker.
Some of the homes that will be approached for signs will be random. Many of them will involve staff that handles concerns getting a name and an address for the purpose of looking into putting a sign there.
“Along with the signs, we’ll also have our VIPS do extra patrolling in the area. Even without enforcement power, they will be seen, and it acts as a deterrent,” said Walker. “That will be followed by having our shifts do extra patrols in the trouble areas.”
Walker said in the most problematic area, monitors are placed. He said, in most cases, the speeding isn’t as bad as it may see. However, he said the monitoring does usually reveal some high rates of speed.
“What we find a lot of times, based on the monitor we put out that detects the number of cars in an area, time of day, and the speed they’re going, is that a very low percentage of those vehicles are speeding,” said Walker. “One of the problems we have in Bridgeport is that the streets are so narrow that when you’re going 25 it seems much faster. At the same time, when you have cars traveling those narrow streets going 35 or 45 miles per hour, it’s a real concern. We hope this helps.”
Walker said residents can also call and request a sign be placed in their yard. They can do that by calling the Bridgeport Police Department during regular weekday working hours at 304-842-8260.
Editor's Note: Chief John Walker is shown with VIPS head Kerry Hess displaying one of the signs that are available to the community.

When the city places speed monitoring devices on mailboxes and telephone polls, people see them and slow down. Once these devices are gone, speeding resumes. On our street, everyone knew about the monitoring device and everyone slowed down, altering the results.

Crazy idea here.....but I think the best option is to put a cop on the street who can write tickets. Otherwise, the cops are going to have to deal with people like me who actually have the guts to tell neighbors they need to slow down. Unfortunately, neighbors don't like criticism since no one today can own up to their actions and simply apologize. I'd rather have a neighbor who hates me for complaining about speeders than a dead child.