The Cultural Foundation of Harrison County and the Barbara B. Highland Fund for the Arts, in partnership with The Robinson Grand Performing Arts Center, are bringing the touring troupe from the legendary improvisational comedy enterprise, The Second City to downtown Clarksburg on Friday, September 23, 2022, at the historic Robinson Grand Performing Arts Center, located at 444 W. Pike St. in Clarksburg, WV.
The Second City’s Touring Company is back, live and in-person with their new show, “Out of the House Party.” Join the raring-to-go cast of 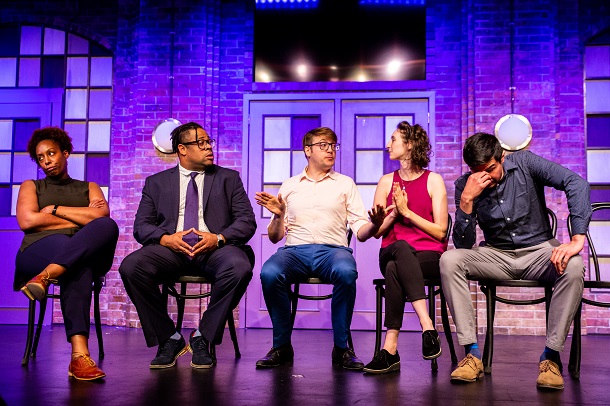 comedians for a laugh-packed adventure. From improv games to classic sketches from the archives, this experience is a great way for us all to laugh our way into the new normal.
“The Cultural Foundation is thrilled to have this unique opportunity to bring world-class sketch comedy to Harrison County,” said Andy Walker, president of The Cultural Foundation of Harrison County. “The Second City has made a tremendous cultural impact not just nationally but internationally. It has consistently trained and fostered the creativity of some of the most recognizable names in comedy.”
The Second City is known for over six decades of political and social satire. Since its debut, The Second City has consistently been a starting point for many comedians, award-winning actors, directors, and other in show business, including Del Close, Alan Alda, Alan Arkin, Harold Ramis, Bill Murray, Gilda Radner, John Candy, John Belushi, Dan Aykroyd, Eugene Levy, Catherine O’Hara, Chris Farley, Tim Meadows, Colin Mochrie, Ryan Stiles, Mike Myers, Nia Vardalos, Steve Carell, Jordan Peele, Tina Fey, Amy Poehler, Stephen Colbert, Aidy Bryant, and many others.
“The Second City is the Harvard of improv and sketch comedy,” said Jason A Young, the Robinson Grand’s consulting program manager. “The players coming to our Grand stage with this touring troupe are likely to be the comedy superstars we will all be seeing on SNL, and in tv shows and movies in the future.”
The Second City’s legendary satire can sometimes relate to issues and situations more appropriate for an audience aged 17 and older. However, to make this hilarious show as accessible as possible The Cultural Foundation has requested a profanity-free show.
In addition to the laugh-packed show, The Second City troupe members will be offering two workshops during their stay in Clarksburg. An afternoon session on Friday, September 23 for local high school students, and a morning session on Saturday, September 24 for adults from the community.
“The Cultural Foundation has always prioritized providing artistic educational opportunities for students in the community. During the pandemic that became challenging, so we are very excited to offer both high school students and adults in our community an opportunity to learn first-hand from the team at The Second City,” said Walker.
The Cultural Foundation of Harrison County, established in 1972, strives to foster an arts-rich environment, and to encourage the development and appreciation of all art forms, while also promoting the growth of artistic, cultural, and economic development.
The Barbara B. Highland Fund for the Arts provides funds to The Cultural Foundation of Harrison County, for the engagement of fine arts presentations of a national scope in Harrison County, WV. The generous provision of this endowment, by longtime resident and patron of the arts, the late Barbara Brennan Highland, is indeed a reflection of her fine character, personality, and love for her community.
The Robinson Grand Performing Arts Center is one of West Virginia's premier performance venues. A recent $15 million renovation has transformed the beautiful historic local theater into one of the state's most spectacular small theater destinations. Preserving the distinct historical charm of the 1913 theater, the Robinson Grand boasts the most modern updates and conveniences of any local performance venue. The comfortable 1,000-seat size of the theater makes every seat feel intimately connected with the onstage performance.
Tickets for “The Second City’s Out of the House Party” start at only $18. Presale for Cultural Foundation members will begin on Wednesday, June 22. Tickets go on sale to the general public on Friday, June 24, 2022, at 10:00 a.m. All tickets can be purchased online at tickets.therobinsongrand.com or by calling the Robinson Grand ticketing center at (855) 773-6283. To become a member of The Cultural Foundation of Harrison County and receive early access to future events presented by The Cultural Foundation, and other benefits, please visit TheCulturalFoundation.org.
Editor's Note: Photo by Tim Schmidt.