By Connect-Bridgeport Staff on January 13, 2021

According to MetroNews, West Virginia Republican Party Chairman Melody Potter has resigned, effective immediately.
In a letter to state executive committee members, Potter cited the health of her parents. “Now, the time has come that I must focus my 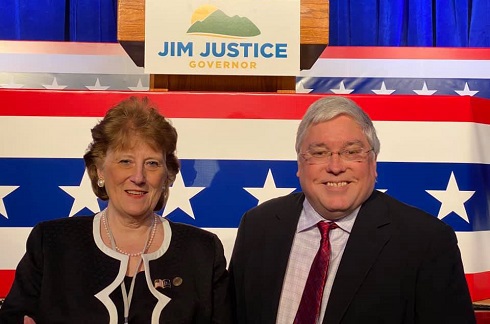 attention on my family,” she wrote.
In a statement on social media, party co-chairman Roman Stauffer said he would assume the duties of acting chairman. Stauffer had been second-in-command at the state GOP and also served as campaign manager for Gov. Jim Justice’s re-election campaign.
“We thank Melody Potter for her decades of service to the West Virginia Republican Party. We have achieved tremendous success under her leadership. We are praying for her and encouraging West Virginians to pray for her as she cares for her parents. Today is about thanking Melody Potter for her service and accomplishments,” Stauffer stated.
Click HERE for the rest of the story.
Editor's Note: Photo shows Melody Potter, left, with State Attorney General Patrick Morrisey. Photo is from the West Virginia Republican Party Facebook page.