FROM WEST VIRGINIA UNIVERSITY
A hospital nurse for 33 years, Nanette Miller would call her husband Frank at the end of each shift to let him know she was coming home.
On Dec. 7, 2018, the phone call came with a somber declaration: “I can’t do this anymore.”
Miller had to help on another hospital floor that day. She didn’t know how to get back. 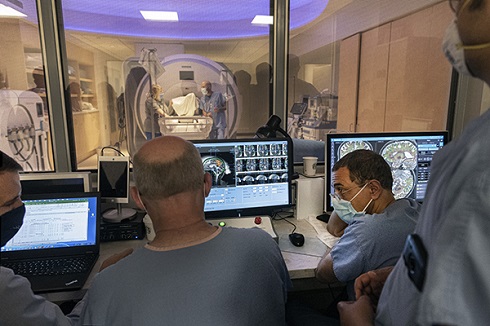 Several months later, she was diagnosed with what she and her husband had feared —early onset Alzheimer’s disease.
But now, not even a year removed from her official diagnosis, Miller is already on a road to potential recovery due to the expansion of a groundbreaking technique crafted by the West Virginia University Rockefeller Neuroscience Institute.
Using focused ultrasound, Dr. Ali Rezai, executive chair of the RNI, and his team successfully opened the blood-brain barrier in a clinical trial with Miller, 54, of Mill Run, Pennsylvania.
By opening the blood-brain barrier, which separates the bloodstream from the brain tissue and restricts medicines, immunotherapy, gene therapy and other therapeutics from entering the brain, researchers hope it can reduce plaques and lessen Miller’s symptoms.
Rezai and his team previously made waves by being the first in the world to open the hippocampal blood-brain barrier in Alzheimer’s patients. With Miller, doctors took it a step further by targeting other parts of the brain, namely the parietal lobe, insula and precuneus.
“Because our first trial with opening the blood-brain barrier was successful, we were able to treat larger parts of the brain,” Rezai said. “These other parts of the brain, broadly the parietal lobe, are involved in knowing where you are within your environment and surroundings, and in thinking and processing of memory.”
During this study, doctors injected microscopic bubbles into the patient’s bloodstream, and exposed the bubbles to focused ultrasound from a treatment helmet attached to the MRI, temporarily causing the blood brain barrier to open.
The gradual decline
Forgetting how to return to her work floor was not the only memory setback for Miller. She struggled with number combinations to secure areas of the hospital containing medicines.
A coconut cake she made mistakenly wound up in a cupboard. By the time, they found it, it had molded.
And, as an organist at Indian Creek Baptist Church in Mill Run for several years, Miller can no longer play the instrument.
According to the Mayo Clinic, Alzheimer's disease is a progressive disorder that causes brain cells to waste away and die. It is the most common cause of dementia — a continuous decline in thinking, behavioral and social skills that disrupts a person's ability to function independently.
But because of Miller’s relatively young age at 54 (most Alzheimer’s patients first experience symptoms after 60), her family and doctors are hopeful they caught it early enough to effectively stabilize or weaken her symptoms. There is currently no cure for Alzheimer’s.
“If I can at least stay on a level plain like I am right now, I’d call that a success,” Miller said.
Frank Miller finds it quite a coincidence that his wife helped countless people over the years as a nurse, and now the tides have turned.
“She helped so many patients,” he said. “And years ago, she and her mother would bake 400 dozen cookies for people for Christmas. Now she’s relying on the help of others and her doctors.
“We do realize this is a study. Nothing’s guaranteed. But we feel we’re helping them out just as much as they’re helping Nanette.”
RNI doctors will monitor Miller for five years as part of the study. They also plan to conduct the trial on additional patients.
“Given the fact that we’re able to treat larger parts of the brain gives us better opportunities to see improvements in symptoms of Alzheimer’s," Rezai said. "I would say if you’re stable, you’re good. If you improve, that’s fantastic.”
Find out more about the Rockefeller Neuroscience Center.
Editor's Note: Doctors with the WVU RNI monitor a clinical trial in action on Nanette Miller, a 54-year-old Alzheimer’s patient. (WVU Photo/ Greg Ellis)