With Trio of Officers Recently Sworn in and Two More on Way to Academy, City Police Almost at Full Staff

By the end of this month, the City of Bridgeport and its residents should feel a little bit safer than they already do. At that time, two individuals will be heading to the West Virginia State Police Academy for training to be future City of Bridgeport Police officers.
While that may seem standard fare, and in a sense, it is, the arrival of those future officers for training is different in one very important 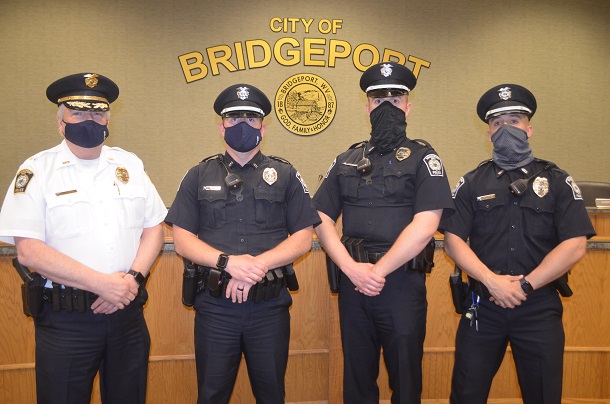 aspect. The addition will put the Bridgeport Police Department back at full staff, according to Chief John Walker.
“It’s been a while,” said Walker. “This is certainly a good thing.”
Walker talked about staffing recently during another standard procedure involving officers. Last Monday, April 26, a trio of new officers were officially sworn in during a Bridgeport City Council meeting.
Officers Robert Gregor, William Townsend, and Austin Zorick all took the oath from Mayor Andy Lang as Walker looked on. The officers took the oath as members of their family, friends and other city police staff looked on.
“They’re right now in their 16-week field training program that involves four stages,” said Walker. “It pretty much involves a lot of patrol work, 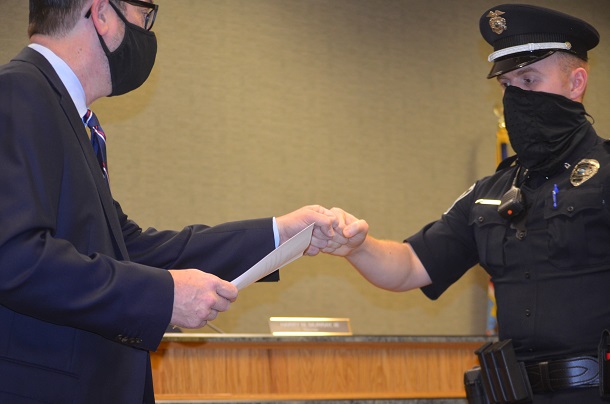 but they are tested, graded, and observed throughout the time.
“They have the program and if they fail, they have to go back to remedial training again,” Walker continued. “If they fail that, then they are dismissed. That would be a rare situation.”
Walker is pleased to have the new trio close to a position to be out on their own. He said it helps with staffing across the board.
“A lot of people don’t realize how our shifts are split up and that they’re separate,” said Walker. “We have to fill shifts and there has to be a minimal number of officers on each shift.
“You have to have seven on shift, but you have to allow for time off, court time, vacation time, and things of that nature,” he continued. “Sometimes a shift can be short due to an ongoing investigation and we have officers assigned to the Drug Task Force, MHIT (Mountaineer Highway Interdiction Team), and our PRO (Prevention Resource Officer) as part of our numbers. Having a full staff makes everything a little bit easier, which is why it is always a good thing to have a swearing in ceremony.”
Editor's Note: Top photo shows Chief John Walker with his new officers, while an officer gets a fist bump from Mayor Andy Lang following the swearing in ceremony last week.