Outside the Tribe: Indians Reign as a Class AA Track and Field Juggernaut comes to an End

In a normal year, early May would be the time I would start getting ready for one of my favorite events — the state track and field meet.
If you look at the 2020 track and field schedules, the Big 10 Conference championships were supposed to be this Friday, regionals next week and then states in Charleston on May 22-23. 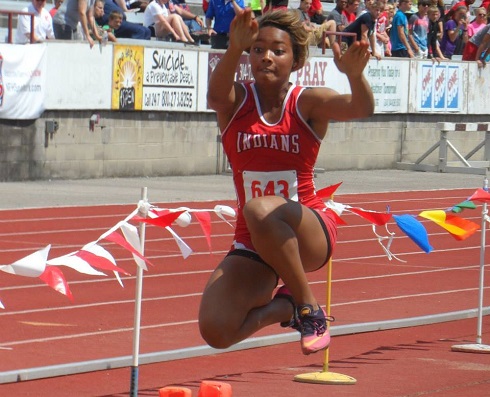 “Supposed to be” are the key words from the previous sentence as the COVID-19 pandemic had other plans for spring sports.
No baseball, softball, tennis or track at all. Not even a regular-season event. No completion of the state basketball tournaments. All of that is a huge disappointment. I’ve said multiple times that I think the shutting down of the sports and the schools was the right decision in terms of statewide health concerns. I’ve also said multiple times that the situation flat out stinks.
No season at all for the Bridgeport track and field teams is disappointing. The fact — and it is a fact, not just opinion — that the Indians would have contended for both the girls and boys team championships at the state meet is even more disappointing.
I will do you one better in the disappointing column. This also brings an end to Bridgeport’s reign of success in the sport at the Class AA level (at least for the next four years). In the 2021 academic year, the Indians will be back at Class AAA in all sports except for boys and girls basketball, both of which will be Class AAAA in the two-year trial period for a four-class system in basketball.
Bridgeport has had success in all sports at the AAA level in the past and I’m a firm believer the success will continue this go-around. Success however doesn’t always translate to domination. Track, more so than any other sport, is a numbers game. And that is something nobody associated with the sport in this state understands better than Jon Griffith, Emily Yurish and the rest of the Indians’ coaching staff.
In AA, you could count on the Indians having a bigger roster than any other school in the state. In AAA, when you start lining up with schools like Cabell Midland, Jefferson, Wheeling Park, Parkersburg and Morgantown, it’s an advantage that Bridgeport no longer has.
Now, numbers have been really good at Bridgeport the past couple of years. This year’s roster alone had more than 100 athletes on it. I would think part of the reason for that is the recent success the track and field teams have had as everybody wants to play for a winner. And from 2013-2019, nobody has won at track and field in Class AA the way Bridgeport has. 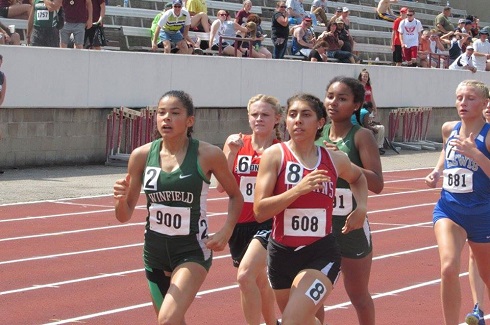 The dynamic did change a bit in 2017 when Winfield dropped from AAA to AA and the Generals and Indians formed quite the rivalry. In the chase for the girls team championship, in each of the last three years, Bridgeport and Winfield have finished 1-2. For the boys, a 1-2 finish happened twice.
Twenty times since 2017, Bridgeport and Winfield finished 1-2 at the state meet in an individual event.
I realize the numbers going back to 2013 are skewed a bit since Winfield wasn’t in AA until 2017, but since 2013 Bridgeport has won a state championship in an individual event 48 times. Winfield has won 27. The next closest after that is Weir with 18. The only other schools with double digit state championships in individual events are Roane County (16), Keyser (13), Poca (13), Oak Glen (12) and Ritchie County (10).
Since 2013 there have been 252 Class AA events at the state meet, Bridgeport has placed (finish first through sixth) in 153 of them.
Of the 18 total events in a track meet, Bridgeport had at least one athlete place every year at the state meet in 12 of them. Three of the events are missing just one year without a Bridgeport athlete, two are missing two and one is missing three.
In 2018 and 2019, a Bridgeport athlete placed in all 18 events.
Since 2013, a state championship has been won by a Bridgeport athlete in 17 of the 18 events. The only one missing is the 100/110 hurdles. And there is an outstanding chance that would have changed in 2020 as Emily Meade was the top returning hurdler in the state and coming off back-to-back runner-up finishes in the 100 hurdles.
In terms of individual success for the Indians since 2013, you must start with McKenna Smith. 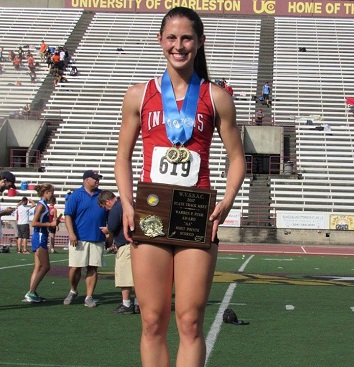 Smith competed in 12 state meet events during her Bridgeport career and walked away with 10 championships. Her performances in Charleston as a junior and a senior are the most dominant and historic the state meet has ever seen — another statement that is fact and not opinion.
As a junior, Smith won all four of her events, the 100, 200, 400 and 300 hurdles. She set new all-time state records regardless of class in the 100, 200 and 400 and a state meet record in the 300 hurdles.
Her senior year was even better as she broke her own all-time records in the 100, 200 and 400 and set a new all-time record in the 300 hurdles.
This note about Smith still astounds me: Prior to 2016, there had been one time in the history of the state for a female in the 100 that was sub 12.0 seconds and that was a hand-held time in a regular-season meet. Smith went below 12.0 seconds more than 10 times in 2016 and 2017.
Smith was also part of a five-year stretch were the Indians won the state title in the 100. Kayla Haywood, who ended her high school career with seven state titles, won the 100 in 2014 and 2015. Isabella Bowen, who won four state titles in her high school career, won the 100 in 2018.
Although Smith and Haywood each competed in a state meet event 12 times since 2013 with 17 championships between them, neither has the most places for the Indians.
That honor goes to Kristen Crowder, who placed in 15 events between 2016 and 2019.
Crowder’s fellow classmates, Kirstin George and Julia Muller each placed in 13. Combined that trio has 19 state championships.
Of the 13 places for George, 12 were in relay events where she was part of seven state championships. The other five relays she was in all finished second at the state meet.
Jenna Alonge (11), Bowen (10) and Catie Wilson (10) also placed in double digit state meet events. Meade would have reached that milestone this year as she had nine through her junior season and Anayia Jackson more than likely would have as well as she had six before this year.
Mateah Kittle is arguably the best BHS girl track athlete without an individual state title during this era as she placed in eight different events.
Since 2013, 49 different girls for Bridgeport have placed in an event and 28 of them have at least one individual championship or was part of a first-place relay team.
For the BHS boys, 47 different athletes have placed in an event since 2013 and 13 have at least one individual championship or was part of a first-place relay team. 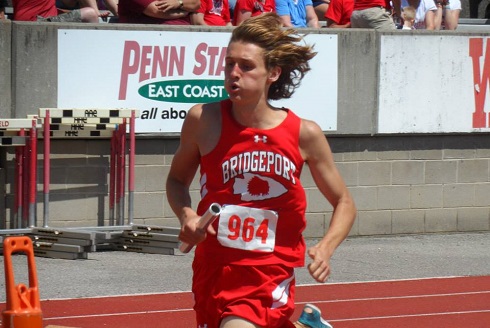 Abe Merinar has the most state titles with five, one of which was part of the 4x800 relay team and he won the mile twice.
In his senior season of 2014, Merinar won the 800, 1,600 and 3,200 at the state meet. His performance in the mile was one of the best Laidley Field has ever seen as he crossed the finish line at 4:17.89. The state meet record in that event is 4:17.54.
Speaking of the 4x800 relay, that event  was the most successful for the Bridgeport boys between 2013 and 2019. The Indians won the state title in that relay four times and was runner-up twice.
Michael Duez, Timmy Kinney, Jimmy Lacaria and Coleton Marsh were all part of two different 4x800 state title teams.
Tristan Shaw has the most event places in the past seven years for the Indians with nine. Merinar and Lacaria each had eight. Trenton Shaw, Maverick Eddy and Josh Osborn all had seven. Chris Trent, Braeden Oldaker and Michael Duez all had six and Mark Duez and Chase Binegar each had five.
There were five combined team titles for the Indians between 2013 and 2019, three for the girls and two for the boys.
The girls finished as the runner-up for the team championship in the other four years. But easily could have turned two of those into two more first-place trophies.
In 2015, a year in which Smith battled injuries and missed the state meet, the Indians finished with 69 points, compared to 69.33 to state champion Berkeley Springs. Also at that meet, Alonge, the odds-on favorite to win the 300 hurdles, false started for the first time in her career and in a mild upset in the long jump, Haywood didn’t defend her title from the previous season and finished second.
Even with all of that, Bridgeport still led Berkeley Springs going into the final event of the day, the 4x400. With about 50 meters left on the final lap, Berkeley Springs moved from third to second place to squeak out enough points to edge the Indians for the team title.
And just last season, Winfield beat Bridgeport, 124- 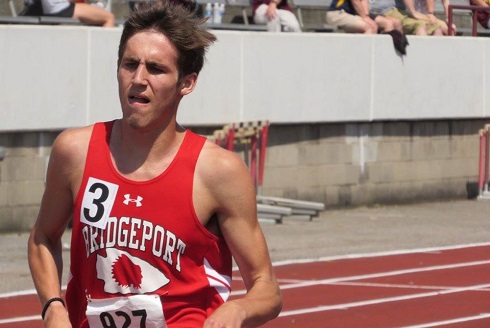 121. The Indians were without Bowen, who didn’t run her senior season and Muller wasn’t quite back to 100 percent after missing a large chunk of the year with injury.
Between 2013 and 2019, a Bridgeport girl won state meet high-point honors five times — Haywood and Smith each twice and Bowen once. For the boys, Merinar took that honor for the boys in 2014. Also Smith won the McCoy Award (given annually to the top male and female cross country/track and field athlete in the state) twice and Merinar won it once.
For 2020, the Indians had a returnee ranked in the top six in 19 of the combined 36 boys and girls events.
In addition to Meade being the top returning hurdler, Madyia McCullough was the top returning girl in the discus.
Between Meade and McCullough as well as the fact the Indians have won at least one relay event every year since 2013, the Indians were in great shape to surpass 50 for individual event titles during this time in Class AA and very well could have added two more team championships.
Editor's note: Top photo features Kayla Haywood in the long jump. The second photo sees Kirstin George running side-by-side with a Winfield competitor. The third photo is of McKenna Smith with a handful of awards she brought home from Charleston. The fourth photo is of Abe Merinar competing in the 4x800 relay and the bottom photo is of Mark Duez preparing to cross the finish line. All photos by Chris Johnson