Outside the Tribe: Lincoln, Bridgeport Girls Basketball Rivalry one of State's Best; Unfortunately that Changes Next Year

By Chris Johnson on March 04, 2020 from Outside the Tribe 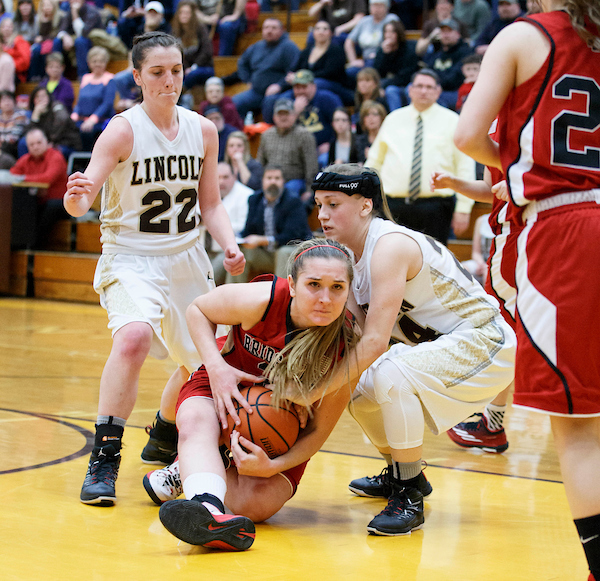 Right now, we are all caught up in the excitement that comes with March basketball.
It’s with good reason as sectionals then regionals and finally the state tournament is a great time to be a high school basketball fan in West Virginia.
The debate about the two-year four-class trial run which starts in the 2020-2021 season has cooled off a bit as we focus on the games in front of us. But make no mistake about it, things are going to be different next season.
I’ve been vocal on how I’m not a fan of the new format and for a variety of reasons. But most of those reasons are best left for a discussion at a different time. One big one though, is the loss of some of the state’s best rivalries.
For my money, one of the best girls basketball rivalries not just in the area but in all of West Virginia is Bridgeport and Lincoln. 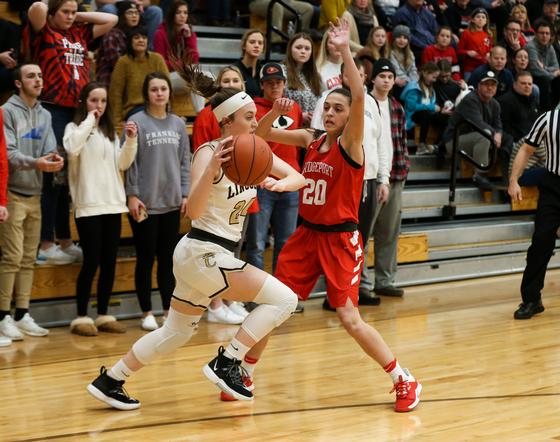 The two schools will still play next year but things are going to be different with the Indians moving up to Class AAAA and the Cougars being in Class AAA. Even without the trial four-class run, things would change as Bridgeport moved back up to Class AAA in the most recent reclassifications, while Lincoln is staying put in Class AA.
Either way, there will be no more sectional games between Lincoln and Bridgeport for the for foreseeable future following last Thursday’s 39-27 win by the Cougars in the Class AA Region II, Section 2 championship game. And the postseason is where this rivalry really heated up.
“I actually said that to (Bridgeport coach) Herman (Pierson) before the game,” Lincoln coach Rob Hawkins said. “This is the end of an era. It was the fourth time in a row we have played in the sectional championship. We have played at least twice a year and three times a lot of years.”
Bridgeport’s run of success across the board in all sports during the school’s most recent stint in Class AA is well documented. Twenty-three state championships for BHS since it joined Class AA at the start of the 2012 school year.
The first one in a three-class setup came in 2013 and it was won by the girls basketball team (the girls soccer team won the state title in the fall of 2012 but soccer is broken down to AAA and AA/A formats).
You could sense something brewing in a Lincoln-Bridgeport rivalry the prior season in which the Cougars made the Class AA state tournament and the Indians lost in the AAA title game to Greenbrier East. 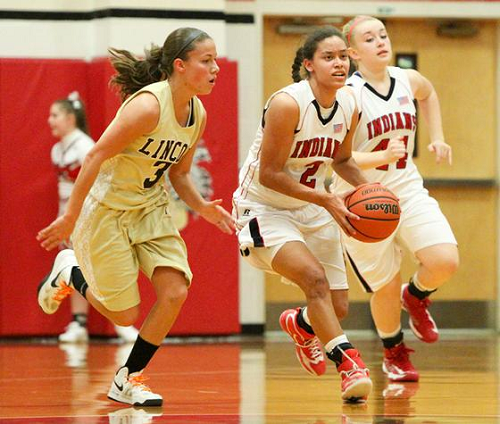 Three meetings per year has been the norm but in the 2012-13 season, the Indians and Cougars actually met four times.
Lincoln finished with a record of 16-10 that season, four of its losses coming to the Indians coached by Dave Marshall and led by state player of the year, Miki Glenn.
The Indians won 54-39 and 49-32, respectively in the regular season before capturing the sectional title with a 44-29 victory. The two would meet again in the state tournament quarterfinals with Bridgeport winning 54-34. Two games later, BHS defeated Westside, 44-27, for the program's first-ever state title.
Just prior to the two schools being in the same classification and section came a tweak to how teams could earn a spot in the state tournament.
The co-regional format was introduced, giving the loser of a sectional title game the opportunity to go play the winner from the other section that made up the region. The winner’s of the two co-regional games would advance to states.
No two schools have taken advantage of this more than Lincoln and Bridgeport.
Since the 2012-13 season, both Bridgeport and Lincoln have made the state tournament in the same season five times, meaning they have met in the sectional title game and whoever has lost went on the road the following week to knock off the Section 2 champion on its home court.
“When we play, it brings out the best of both of us,” Hawkins said. “Every year, we kind of know what we have to do and we have to beat Bridgeport to get anywhere. Both crowds really support their girls basketball teams. Whenever, we play, it’s a good crowd but especially in the postseason, it just creates such a great atmosphere. I hate to see that part of it end.”
Hawkins, who spent several years as the boys coach at Lincoln, didn’t get his first win in the girls series until the 2013-14 season with a 72-47 victory that snapped a 10-game win streak for the Indians that dated back to the 2009-10 season.
The Cougars swept the three meetings in 2013-14, including a 43-34 win in the sectional semifinals. The only thing odder than them not meeting for the sectional title that year was that neither made it to Charleston.
That wouldn’t be the case the following year. Paul Ayers took over for Marshall, in what would be his only year as head coach for the Indians. Bridgeport defeated Lincoln 52-36 in the first regular-season game that season, Lincoln bounced back with a 59-57 overtime win in February and would go on to win the sectional championship against BHS, 50-31.
Both won the co-regionals to advance to the state tournament where Lincoln scored somewhat of an upset, beating North Marion, 59-55, in the quarterfinals and Bridgeport nearly did, falling to Fairmont Senior in overtime, 66-60. 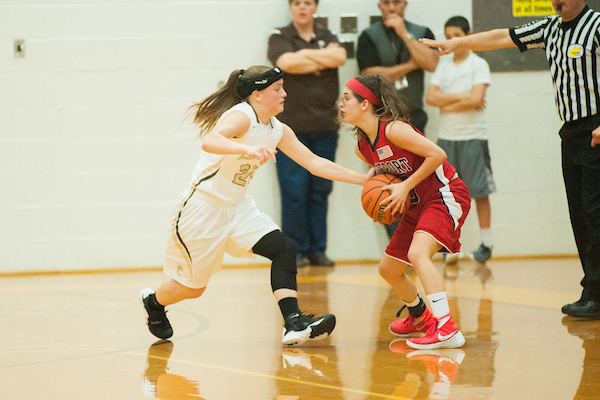 Bridgeport and Lincoln each had a strong nucleus of young players featuring names like Hope Bray, Gracey Lamm, Quinn Stalnaker and Gianina Renzelli that would carry this rivalry on their backs for the next couple of seasons.
Lincoln swept the 2015-16 regular-season meeting and the Indians were upset by Grafton in the sectional semifinals, who would later upset Lincoln at the state tournament. It marked the first year since the 2011-12 season that Lincoln and Bridgeport would not meet three times in a year. It also marked the arrival of Dennis Hutson as the head coach for the BHS girls.
Hutston has a unique outlook on the series as he at one time was Lincoln’s coach. He said when he was at Lincoln the games against Bridgeport were always a draw but the Cougars controlled the series and University was more of a rival. However, any postseason games that popped up with Bridgeport, the stakes were higher.
“When I was at Lincoln, if you got beat in the sectional, you were done,” Hutson said. “Both teams have always been really competitive and both teams have been on a pretty nice run the past couple of years. It’s a good rivalry and it’s a shame that it’s ending. They will play in the regular season but it takes away from competing against each other and that chance to go to the state tournament together.”
The 2016-17 season kicked off a streak of three straight years where Lincoln would win two of the three meetings, there would be a sectional title game and both schools advanced to Charleston. 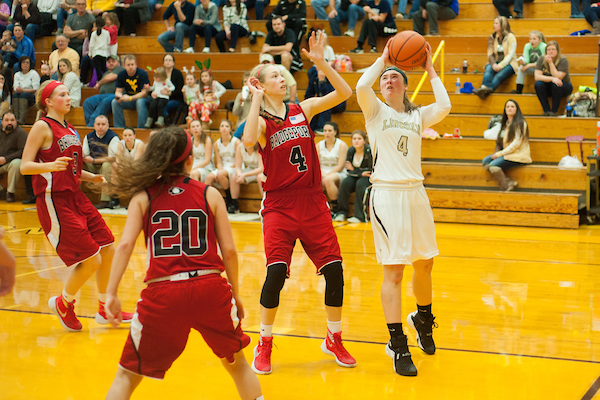 That year also featured one of my all-time favorite regular-season basketball games in Bridgeport’s 64-60 win in overtime.
With many sporting events, you can look back, reflect and think, “Well if this certain player would have done this” the outcome may have been different. I can’t do that with this game, because every star player was a star that night. Every role player did their job and then some.
Just check out some of these stats from that game: Bray 23 points, 11 rebounds; Lamm 19 points; Stalnaker 15 points, seven rebounds; Emily Riggs 18 points; Renzelli eight points, 10 rebounds.
That win also marked the only time Stalnaker, Renzelli and that senior class won on Lincoln’s floor.
Lincoln won the first two meetings in the 2017-18 season before the most controversial game in the series took place in the sectional championship game — a game that almost didn’t happen at all.
That was when the teacher’s strike was going on and there was serious talk of the game just flat out being cancelled, bringing an end to both team’s seasons. A compromise was made that allowed for the game to be played on a neutral site (outside of Harrison County) and neither head coach (Hawkins and Hutson) was allowed to be on the sidelines.
The game was played at the Waco Center at Glenville State and despite the circumstances, it turned out to be another great one in the series as Kaitlin Smith shot the ball as well as any player at any time in this rivalry ever has, making six 3-pointers and finishing with 25 points to lead the Indians to a 62-60 win and the sectional crown. 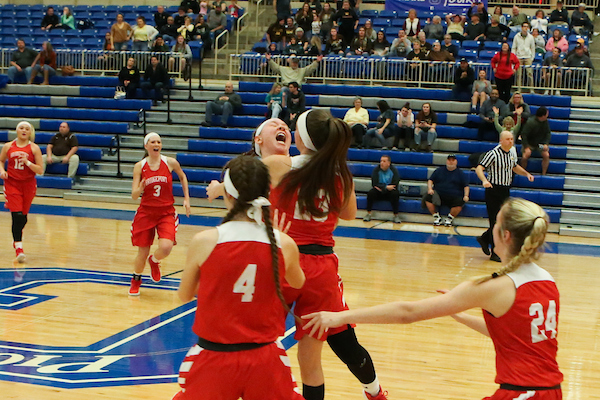 Last year, the Cougars won the first meeting, 38-32, the Indians took the second one, 50-31 and Lincoln emerged with the sectional title after a 48-41 win.
Both teams lost in the quarterfinals of the state tournament and Hutson announced his retirement after the Indians’ game against Wyoming East in Charleston.
“Another great thing about this rivalry is I think there is a lot of mutual respect,” Hawkins said. “You want to win when you play them, but you want to see them succeed too. I’ve always had great relationships with the coaches whether it was Dave or Dennis (Hawkins was even an assistant at one time under Hutson) or now Herman. It’s just a shame that it’s going to change next year.”
But before next year, there is the possibility of a fourth meeting between the two schools in Charleston. Lincoln will face Lewis County in one co-regional Thursday, Bridgeport is on the road to face Braxton County the same night in the other co-regional.
The Indians have already won at Braxton once this year, and without question are talented enough to do it again. When BHS plays defense the way it is capable of, the Indians can beat just about anybody in Class AA.
There might have to be an upset along the way and some unexpected seeding to set up a Lincoln-Bridgeport matchup at states. If the Indians do beat Braxton County, they will likely be the No. 7 or No. 8 seed in Charleston, which would likely mean a first-round game against North Marion or Winfield — the two schools with the style of play that best gives the Indians fits.
But, the chance is there for that fourth meeting is there as of right now. And I’m all for it. I’m not sure I’m ready to say goodbye to Lincoln-Bridgeport postseason basketball games just yet.
Editor's Note: Top photo features Lincoln's Gracey Lamm and Bridgeport's Quinn Stalknaker fighting for control of the ball. Second photo features Lincoln's Victoria Sturm trying to get past Bridgeport's Gabby Reep. Third photo is of BHS' Miki Glenn looking to push the ball up court as Lincoln's Mikayla Prunty defends. Fourth photo is of Lamm and Bridgeport's Gianna Renzelli. Fifth image is of Lincoln's Hope Bray going up for a shot against BHS' Rory Marple. Sixth photo is of Bridgeport celebrating its 62-60 sectional title game victory against Lincoln.