The Bridgeport High School baseball team’s quest for an eighth consecutive state championship (six in Class AA and last year in Class AAA) continues on Monday with the start of the Class AAA Region I championship series against Morgantown.
The Indians (32-5) will visit the Mohigans (19-7) for a 5:30 p.m. game on Monday at Mylan Park. 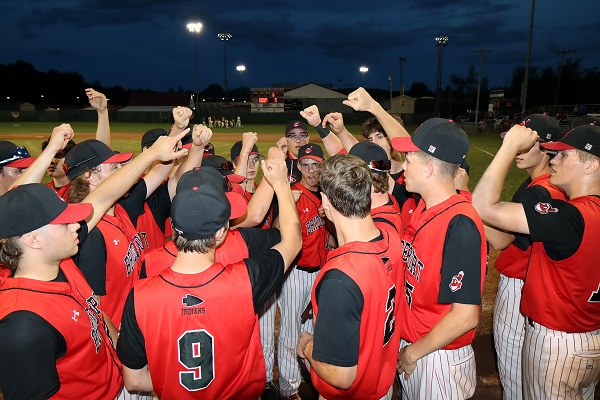 The second game of the regional will be at 5:30 p.m. Tuesday in Bridgeport.
If a third game in the best of three series is needed, it will be played again at 5:30 p.m. on Wednesday back in Morgantown.
BHS added a pair of wins this past week in tune-up games, defeating Robert C. Byrd, 4-1, and Fairmont Senior, 9-2.
Against the Eagles, Ben McDougal and Chris Harbert each had strong outings on the mound. McDougal picked up the win, throwing four shutout innings with one hit allowed, no walks and eight strikeouts.
Harbert went three innings, surrendering just two hits, one run, no walks and four strikeouts.
At the plate, Aidan Paulsen had an RBI double, while Harbert and Zach Rohrig also drove in runs.
In the victory against the Polar Bears, Anthony Dixon led a balanced offensive attack, going 3-for-3, including a double, with three RBIs and two runs.
Cam Cole went 2-for-2 with a double, one RBI and two runs.
Paulsen hit another RBI double and scored two runs. Rohrig also had an RBI double.
Zach Nicholson came out of the bullpen to pick up the win, throwing three shutout innings with no hits allowed and one strikeout.
Bridgeport and Morgantown split in the regular season. The Mohigans won the first meeting, 7-1, and the Indians took the second game, which was the final of the regular season, 5-4.
Editor's Note: Photo by Joe LaRocca shows the Indians celebrating after winning the sectional championship against University.