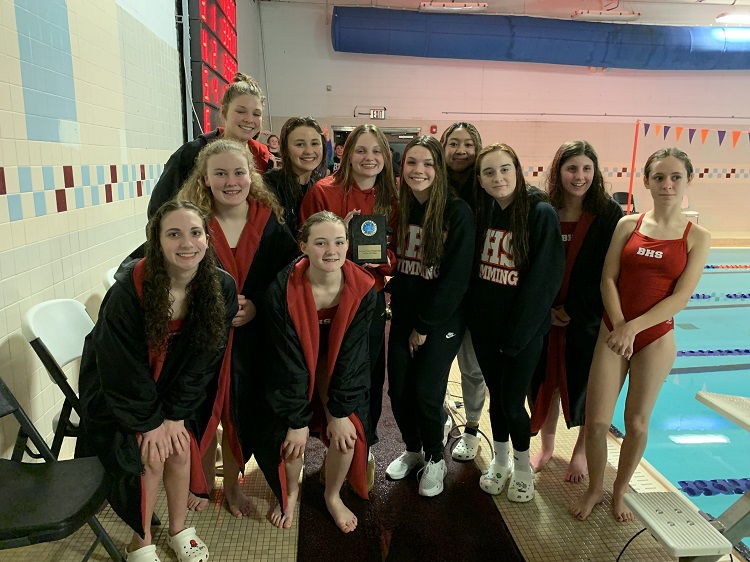 On a day where seniors on Harrison County swim teams were honored, it was a group of Bridgeport High School underclassmen that took center stage at the county championship meet on Friday at the Harrison County YMCA.
Led by a core group of sophomores, the BHS girls captured the team title and the BHS boys behind a strong contingent of freshmen finished second behind Robert C. Byrd.
Seven total seniors were recognized before the meet started. Four of them were from Bridgeport in Jenna Wood, Ruby Jackson, Ryan Hall and Mario Galindo. Two were from RCB in Jacob Howe and Adam Fubio. The final senior was from Liberty in Aby Bunnell.
The girls won all 11 events (one of which was a tie for first) and finished with 140 points. Liberty was the runner-up at 75, Robert C. Byrd was third at 16 and Lincoln was fourth with nine.
“I’m really proud of the girls,” BHS coach Jan Grisso said. “They’ve been one or two every time. We have a lot of depth and it’s a lot of quality depth.” 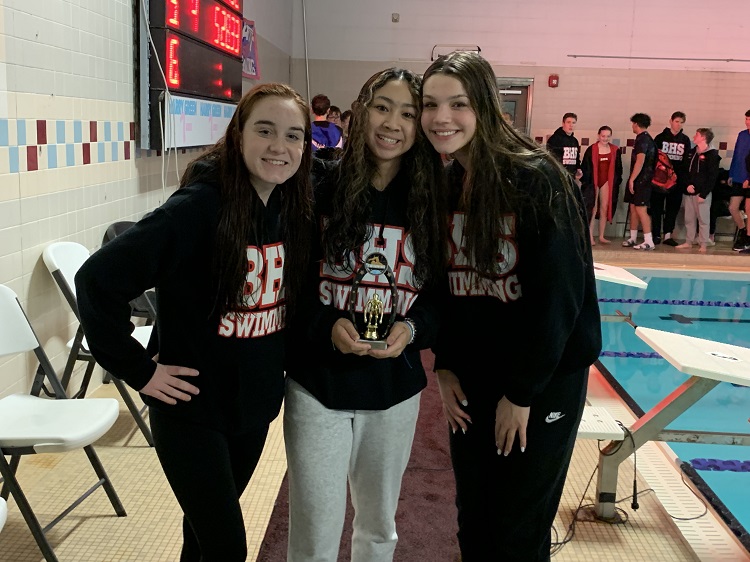 The BHS trio of Amelia Romano, Kira Gazal and Gretchen Lang shared high-point honors as each sophomore won two individual events and were part of first-place relay teams.
Romano won the 200 IM with a time of 2:23.58 and the 100 free with a time of 57.98.
She was joined by Gazal, Jenna Wood and Jackson on the first-place 200 medley relay team that finished with a time of 2:10.13. The same four girls won the 400 free relay with a time of 4:19.54.
Romano, who had a great freshman season for the Tribe, has not only emerged as one of the state’s elite swimmers as a sophomore, she’s also showing some leadership skills.
“I feel like I was given the responsibility that Marra (Johnson) was gone that it was my turn to show the freshmen, the people who hadn’t swam before what it means to be a part of the Bridgeport High School swim team,” Romano said.  “I think so far we are an awesome team.
“It was a very good day for us and I think everybody is ready and in race mode and I think we are going to do really well in the upcoming championship meets.”
Gazal won county titles in the 100 butterfly with a time of 1:13.47 and the 100 backstroke with a time of 1:10.26.
Lang took first place in the 200 free with a time of 2:15.28 and the 500 free with a time of 6:05.83. She also joined Kaylin Terneus, Jacie Wood and Addison Tharp in winning the 200 free relay at 2:01.56.
Jenna Wood captured the county title in the 100 breaststroke with a first-place time of 1:21.23. Jackson and Liberty’s Savannah Payez both finished with a time of 28.68 in the 50 free for a share of the county championship. 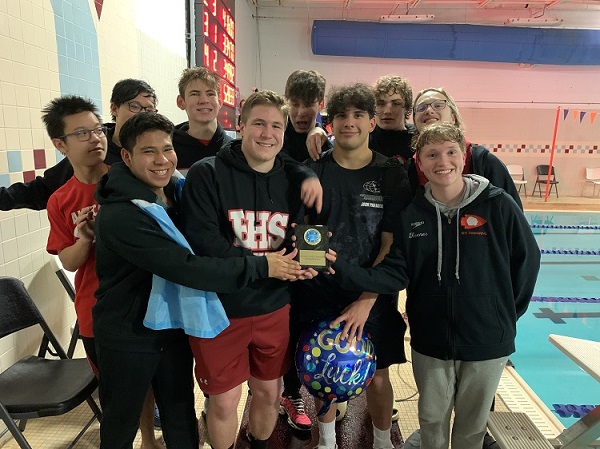 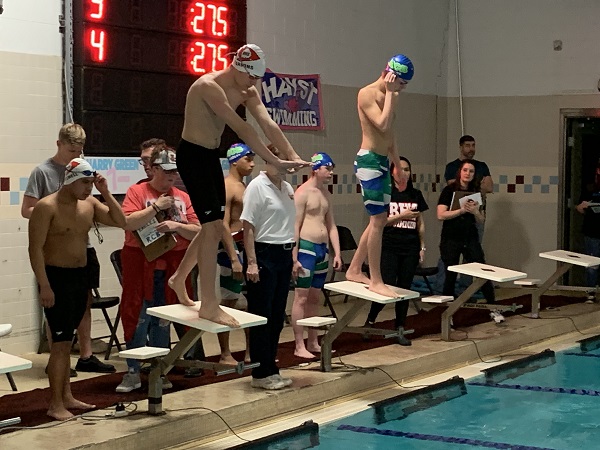 The BHS girls had two more relay teams that posted impressive times but their finishes didn’t go toward the team standings because only one relay team per school can place in those events. McBrayer, Price, Terneus and Wanger had a third-place finish in the 200 medley relay at 2:33.53. Lang, Tharp, Wagner and Jacie Wood were third in the 400 free relay at 4:43.61.
The same scenario played out for the boys as Hall, Michael Hadjis, Nicholson and Weng were third in the 200 medley relay with a time of 2:11.05.
The RCB duo of Kaden Meighen and Howe shared high-point honors.
Meighen won the 200 free at 1:57.19 and the 100 free with a time of 53.51.
Howe set a new county meet record in the 50 free with a time of 21.83, breaking the 2020 mark of former BHS standout Randy Keener (22.31). He also took first place in the 500 free with a time of 5:15.25.
Meighen and Howe teamed with Fubio and Armondo Montero to win the 200 free relay with a time of 1:37.32. The same four also won the 400 free relay at 3:34.70.
Editor's Note: Top photo shows the BHS girls with their county championship trophy, second photo is of high-point winners Lang (left), Gazal (center) and Romano. Third photo is of the BHS boys with their runner-up trophy and in bottom photo, Parsons prepares to dive into the pool.