The seven-time defending state champion Bridgeport High School baseball team is headed back to Charleston.
The Indians (34-5) will go after their second consecutive Class AAA title (prior to 2021 they won six straight in Class AA) following a 5-2  victory against Morgantown in the Region I championship game on Tuesday in Bridgeport.
Ben McDougal improved to 6-1 on the season with five gritty innings where he scattered four hits and struck out eight while issuing four walks and hitting two batters. 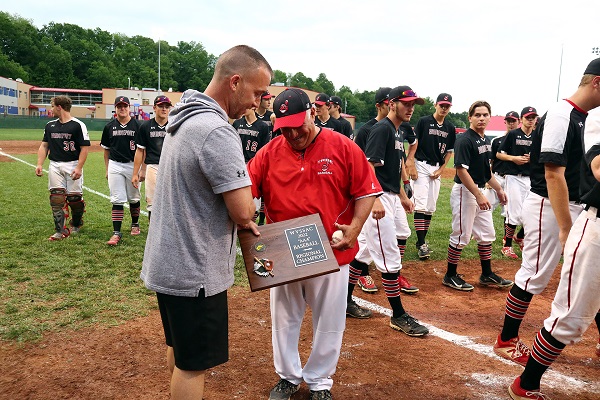 Austin Mann, for the second time in as many days, picked up the save. He pitched the final inning in Monday’s 5-1 win at Morgantown. On Tuesday he threw two scoreless innings with a pair of strikeouts.
“We’ve seen Ben have better outings but he battled and he worked out of some tough spots,” BHS coach Robert Shields said. “And what a job Austin Mann came in and did for the second night in a row.
“This never gets old. These kids work so hard and they deserve it. They deserve to get back to Charleston.”
The Mohigans grabbed a 1-0 lead in the top of the first thanks to a Ryan Fluharty RBI single but it would prove to be a short-lived advantage
Four of the first five batters for the Indians in the bottom half of the first reached via a walk. The one out was a perfect sac bunt from McDougal.
Chris Harbert drew a walk with the bases loaded to tie it at 1-all. Zach Rohrig and Phil Reed delivered RBI singles and Harbert scored the Tribe’s fourth run on a Drew Bailey groundout.
Bailey would account for the Tribe’s final run with an RBI single in the third.
Fluharty had an RBI double for the Mohigans in the fifth.
The Class AAA state tournament will be June 3-4 at Appalachian Power Park in Charleston.
The first AAA game will pit the No. 1 seed vs. the No. 4 seed at 5 p.m. The No. 2 and No. 3 seed will take place approximately 50 minutes after the 5 p.m. game.
Seeding for the state tournament will be finalized later this week once all four regional tournaments are completed.
Editor's Note: Bridgeport Athletic Director Mark Jones presents BHS baseball coach Robert Shields with the regional championship trophy. Photo by Joe LaRocca.