Part of the excitement of going off to college is the opportunity to try something new.
Bridgeport High School senior Ryan Hannigan has already made sure that will happen when she attends Glenville State University in the fall and she becomes a member of the Pioneers’ cheerleading squad. 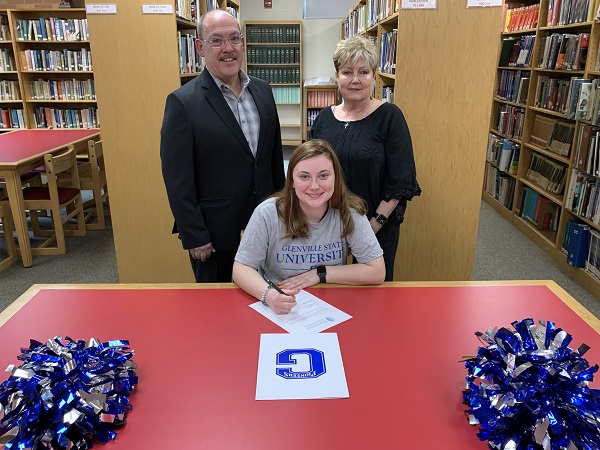 Hanngian signed her National Letter-of-Intent on Wednesday during a signing ceremony in the BHS library in front of a crowd of family and friends.
“It’s a very small school and I really enjoyed the campus,” Hannigan said. “All the people there were really nice and helpful.”
Here’s where the “new” aspect really kicks in – Hannigan has no cheerleading experience.
“I have never cheered before,” she said. “When I went for registration and a girl on the team told me about tryouts, told me what they where and I said, ‘OK, I will be there’ and I tried out and I made it. I was a little surprised.
“I just really wanted to try something new, something to get involved in with the school.”
Hannigan said the closest thing she has to cheerleading experience is when used to dance in elementary school. Yet she impressed the Glenville State coach right off the bat with how quickly she caught on during the tryouts.
The cheer program at Glenville State was revamped just a few years ago but has already played a significant role with the athletic department. In addition to being at football and men’s basketball games, the Pioneer cheerleaders were with the women’s basketball team for every step on the way to the Division II national championship.
Hannigan said it was exciting to be going to a school where women’s athletics are treated with the same reverence that the men’s teams receive.
Glenville State is also well-known for the area in which Hannigan plans to study.
“I plan on majoring in criminal justice,” she said. “Here, with Bridgeport, they have a UTC program so I go there for law and public safety and I’ve really enjoyed it that past two years. That’s something I’m super interested in. I want to help people.”
Editor's Note: In the photo Hannigan is flanked by her father, Lenny Hannigan (left) and Cheryle "Sherry" Sabo (right) during the signing of her Letter-of-Intent.