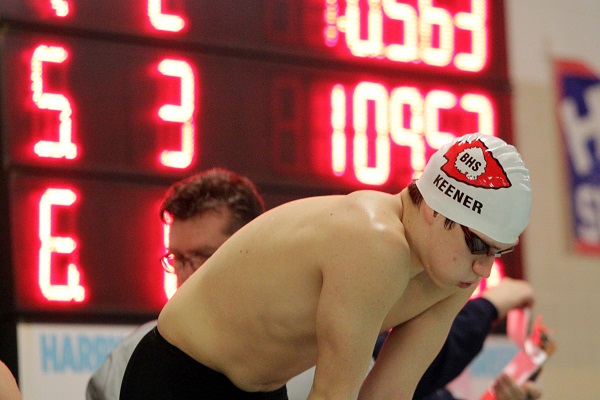 As the Harrison County Championship swim meet was winding down, a fellow competitor approached Bridgeport sophomore Randy Keener and said, “Look at you breaking three records.”
Without skipping a beat, Keener responded, “Thank you, but only two of them were just me. The other one was in a relay and we all broke it.”
Breaking records has become a habit for Keener, who after an eye-opening freshman season that helped the Indians capture the state championship has only cemented his name as one of the state’s elite swimmers in year number two. 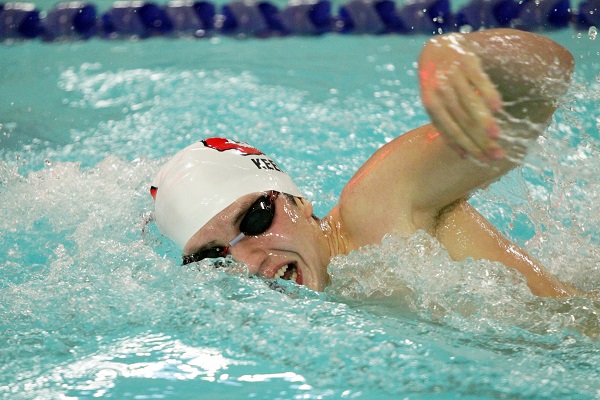 He’s also a huge reason why the Bridgeport boys will be one of the favorites to win the team title again at the state meet which takes place Thursday and Friday at the Mylan Park Aquatic Center in Morgantown.
“I just like to race,” Keener said. “As a competitor, you want to win every race you are in but the relays mean a little bit more than the individual ones. Plus, they account for more points in the team standings. We’ve worked hard to get all three of our relays into the top five in the state. You do that and that goes a long way toward going after the team championship.”
At the state meet, the top 12 finishers in each event will place and pick up points. For individuals, the scoring is on a 16-13-12-11-10-9-7-5-4-3-2-1 scale. For relays, each place’s point total is doubled.
For example, a first-place finish in a relay will yield 32 points.
The Indians will enter the state meet with the top regional time in the 200 medley relay at 1:43.05 and the second-best regional time in the 400 freestyle relay at 3:29.65. Keener is on both of those squads.
He’s joined by Luke Pinti, Mason Titchenal and Reed Smith on the 200 team. In addition to Keener, Marcel Rodriguez, Phillip Malenich and Titchenal are on the 400 team.
Also for the Tribe, the 200 freestyle relay team of Malenich, Smith, Pinti and Rodriguez had the state’s third best regional time at 1:36.30.
So, the BHS boys will be in great shape when it comes to the relays in Morgantown this week.
Keener perhaps undersold how good the three relays have been as the Indians have not only become Top 5 in all three but prior to the regionals (which determines the seeding for states) they had the state’s top times in all three.
“I can’t say enough about how pleased I am with the boys this year,” Bridgeport coach Jan Grisso said. “We have a lot of talented swimmers. Randy is one of those kids that sets goals and he keeps going out there and knocking those goals off his list.” 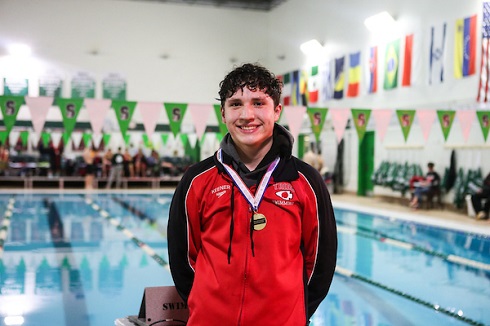 Prior to the Region III meet, Keener was ranked no worse than fourth in the state in seven different individual events — 50 free, 100 free, 200 free, 500 free, 100 backstroke, 100 fly and 200 IM. His 200 free time of 1:48.23, his 500 free time of 4:58.28 and his 100 back time of 52.28 are the best in the state.
Grisso and the Indians like to refer to the final four meets on the schedule — Harrison County Championship, Big 10 Conference Championship, Region III Championship and State Championship — as “Championship Season.”
Through three of those events, Keener has placed first in six individual events and six relay events. He’s also set eight meet records in those 12.
Back at the county meet, he set records in the 50 free (22.31), 500 free (5:00.00) and was part of the record-setting 200 freestyle relay team (1:35.93).
At the Big 10 meet, he went 4-for-4 with breaking records —200 medley relay (1:44.01), 200 free (1:48.23). 100 fly (54.68) and 400 free relay (3:29.30).
The only question heading into regionals was exactly what events Keener would be in because if he won (and he did), those would be his races for states.
In addition to the 200 medley and 400 free relays, Keener was in the 200 IM, which he won with a time of 2:01.60. That not only is the best time from any of the four regions, it’s the best time by nearly 8 seconds for the largest gap between first and second seeds for any of the 22 events at the state meet.
At the regional, he also won and set a meet record in the 100 backstroke with a time of 52.72. He will be the top seed in that event as well later this week in Morgantown.
So think about that for a second. In his two individual events at the Region III meet, Keener competed in two races that he hadn’t swam in for at least two weeks and set a record in one and beat the rest of the state by 8 seconds in the other.
The Indians are blessed to have a roster full of state-championship caliber swimmers. Titchenal, Rodriguez and Pinti could all pick up state titles in individual events this week and nobody will be surprised. They along with Malenich and Reed Smith will be crucial if the Indians are going to excel in the relays.
And on the girls side, the Indians, who were state runner-up a year ago, will once again be in contention for the team title and the likes of Marra Johnson, Cheyanne Rohde and Darian Spencer will be in the hunt to win every race they are in.
But Keener is different. He has that rare ability to make everybody in attendance stop and watch when he is in the pool because history could be made every time he competes. 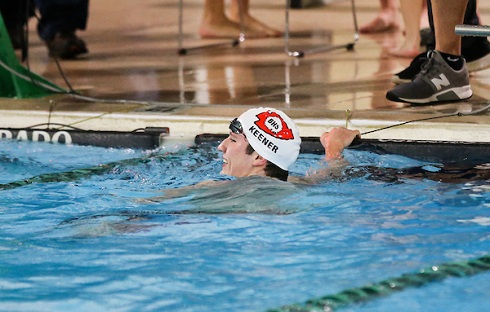 Other previous swimmers from the area like Michael Walker or Frank Csonka had it. In track an field, McKenna Smith and Freddy Canary had it. Keener has it as well.
Besides having God-given athletic ability, work ethic and a competitive nature, a reason that enables someone to reach that status is focus.
If we go back once more to the county meet a few weeks ago, prior to his first event that day, the 50 free, Keener could be seen by himself, listening to some music to get himself fired up, focused on the upcoming race. After winning, he was the first person back in the pool for the warm-up period when there was a break in sessions.
“I really don’t like to even talk that much before my events,” Keener said. “I want to be focused and mentally prepared to race. There is a different level of mental preparation for each race. When the meet is done, then I can look back at what happened.”
Odds are, there are going to be plenty of positives for Keener to look back on when it’s all said and done in Morgantown this week.
Editor's Note: Photos courtesy of www.benqueenphotography.com