Signing to continue playing sports at the collegiate level is a big moment in a high school athlete’s career.
It’s one that often comes with the knowledge that change is coming. Seldom though does that change involve moving to a different country. 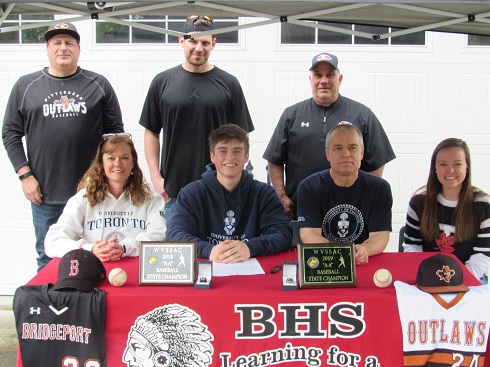 Bridgeport High School baseball standout Ben Mossburg is not only taking his talents to the next level, he’s going international. On Thursday he signed his letter-of-intent with the University of Toronto in Ontario, Canada during a ceremony in front of family, friends, coaches and teammates.
“I went to a baseball showcase last summer and there was a Canadian baseball school there,” Mossburg said. “It wasn’t the University of Toronto, it was McGill University. That kind of sparked my interest in looking outside of just American schools to attend.
"We actually ended up going to Toronto for summer vacation that same summer. I emailed coach (Mike) Didier beforehand and said, ‘Hey I’m really interested in the program let me know if we can meet up at some point.’
“He said yeah you can come down and watch a practice, we’ll get to know you and you can meet the guys. From then on, the relationship was awesome and I knew that was the place I wanted to be.”
BHS coach Robert Shields has seen countless of his players go on to play in college but said one going to Canada was a first for the program. He also said Toronto was getting much more than just a solid catcher with a decent bat.
“They are going to get a kid that is very intelligent and hard-working,” Shields said. “He’s a student of the game. He’s worked hard to improve his arm strength and he’s a decent hitter. But more importantly, they are getting just a great kid.”
Catchers are generally considered intelligent baseball players, one would imagine that those planning on majoring in Chemical Engineering — as Mossburg is — are too.
“The University of Toronto is actually a top 20 public university in the whole world,” Mossburg said. “Their engineering program is very prestigious as well. Being able to combine the prestige  of the University of Toronto and being able to play baseball really meant a lot in my decision.”
Mossburg and his BHS teammates should be planning for a sectional opponent this week as the Indians were supposed to be chasing a seventh consecutive Class AA state championship.
That chase as well as the entire high school spring sports season was erased by the COVID-19 pandemic. A disappointing situation for sure but Mossburg said making his college plans official did at least provide one bright spot on the lost season.
“Knowing that my high school baseball career got cut short it’s nice to know I get to continue playing baseball at the next level,” Mossburg said.
Since he can’t get on a field and play right now, he said that he’s been lifting weights and running to help stay in shape. He added that he thinks further improvement of his arm strength is the biggest thing he needs to work on, specifically his pop time which is the time on his throws from the plate to second base.
When he joins the Varsity Blue (Toronto’s mascot) another significant change is that wooden bats are used there, rather than aluminum.
The 2019 Varsity Blue roster featured just two U.S. born players, one from New Hampshire and one from New York.
“I’ve been there, I’ve visited the campus, I’ve met the guys for the most part,” Mossburg said. “They are all really great. The stereotype that Canadians are the nicest people on earth is pretty accurate. I don’t think I will have any problems integrating myself into that system.”
Editor's Note: Pictured in photo, front row (from left), Marcy Mossburg, Ben Mossburg, Jeff Mossburg, Katie Mossburg. Back row (from left): Vince Capozza, Alan Robbins, Robert Shields.