Bridgeport High School standout Bryce Carnes finalized plans on Friday to continue his wrestling career at Fairmont State University.
The signing ceremony took place in front of a crowd of family, friends, teammates and coaches at Training Traditions, the facility where the Indians train on the property of head coach Dr. Chris Courtney. 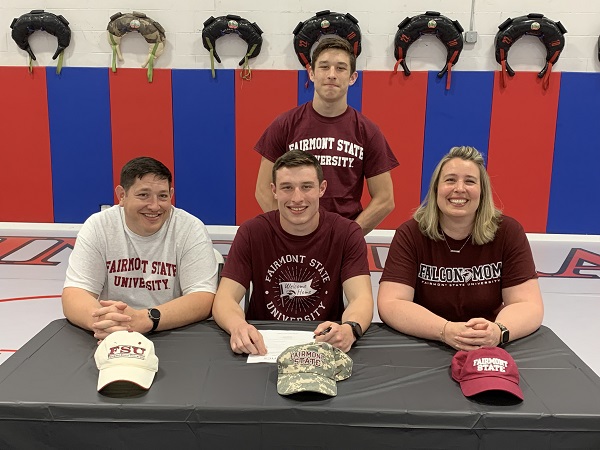 “I’ve been wrestling pretty much my whole life and I wanted to keep doing it,” Carnes said. “I’m looking forward to all the new experiences I will get to have, like wrestling out of the state. I’ve never wrestled out of state.
The BHS and Fairmont State wrestling programs have a solid working relationship already and that only helped make the decision easier for Carnes who said there is a familiarity with him knowing what to expect with the Falcons and them knowing the type of wrestler they are adding to their roster.
Carnes finished his senior season with the Indians at the state championship meet in Huntington where he won two matches in the 182-pound bracket and lost two. His record for the year was 25-11. He placed fourth in Region I and was also the Big 10 Conference champion at 182.
“I definitely improved a lot through my career,” Carnes said. “My freshman year, I was not the greatest. I don’t think I wrestled a varsity match. As I progressed, especially my junior year and then this year, I figured out kind of my own way of wrestling.”
Friday also marked the second signing ceremony in three weeks for Carnes as he took part in the first-ever Military Signing Day at BHS. Carnes had already been a member of the Army National Guard but the school wanted to honor him at the ceremony especially since BHS now has the Purple Star designation in place. 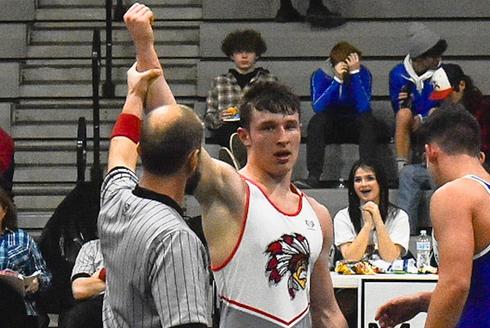 Carnes actually went through boot camp last summer and he will report this summer on July 25 to complete his training.
He’s looking forward to the challenge of being a collegiate wrestler at the same time he is serving his country.
“I’m going to be busy,” Carnes said. “But it’s already worked out that I’m excused from drills if I have a big wrestling tournament on a weekend. I just have to make it up.”
Carnes, who is also a standout lacrosse player for the Harrison County Bruins, said he plans to major in aviation and piloting and airport management.
“They have a really good program there,” Carnes said. “That just made the decision even easier. I had already been looking there anyway.”