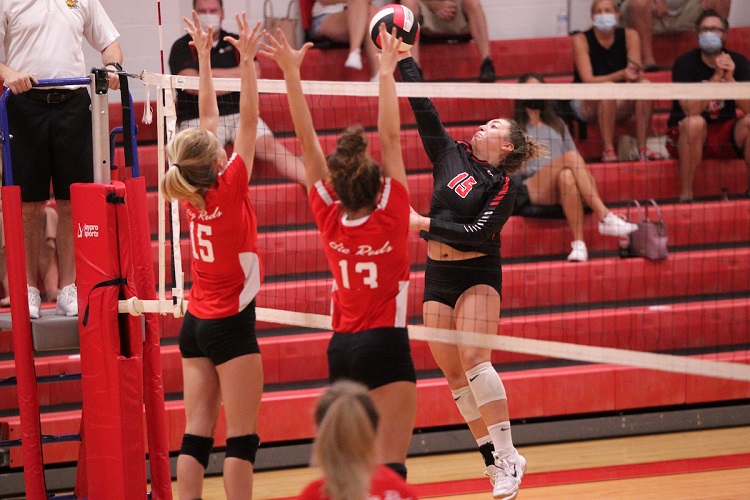 Toward the end of the Bridgeport High School volleyball team’s first set against Parkersburg on Saturday, junior Violet Sickles delivered a perfect kill that ended up being more important than just giving a point to the Indians.
Earlier in the day Sickles had a series of attempts that sailed high and it appeared as if her confidence was wavering on the court. However, she got it back and it gave BHS a much-needed boost as it rallied after a 27-25 loss to the Big Reds to come back with 25-13 and 25-18 victories to take the match and improve to 4-2 overall on the season. 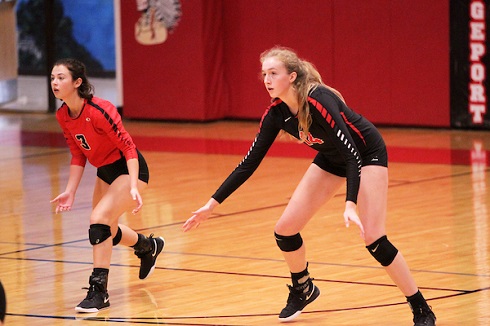 The win against Parkersburg came during a tri-match that also included Musselman, which defeated Parkesburg as well as Bridgeport (25-11, 25-21). Musselman and Parkersburg are consistently two of the strongest Class AAA programs with a combined 10 state championships between them. The Indians are looking to prove they belong in that category as well, making the jump from Class AA to AAA this year.
“I would rather play Musselman 12 more times and lose all 12 times than play somebody whose skill level is below ours,” Bridgeport coach Ali Burton said. “We play better against that better competition level and I think where we have some inexperience, there were some nerves when we played Musselman.
“They know who Musselman is because we talk about them all the time. I think for Violet there was a little fear there against Musselman but she played with so much more confidence after the first game against Parkersburg.  That’s what she can do if she just plays with confidence.”
Against the Big Reds, Sickles finished with a season-high 13 kills and her first three serving aces of the season. Her stat line complemented yet another stellar effort from returning first-team all-stater Shea Hefner, who had 17 kills, 16 digs and a pair of aces.
Through six matches, Hefner is averaging 10.7 kills and 9.2 digs. 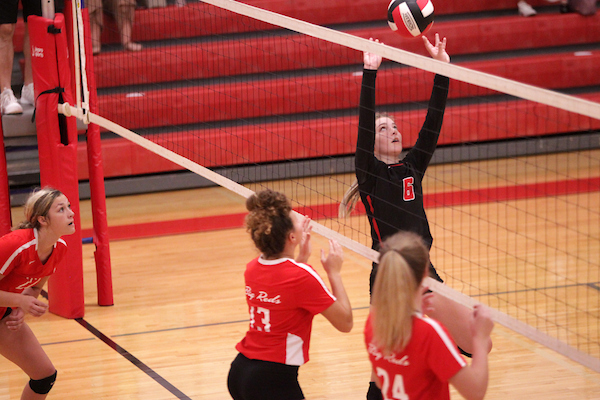 Jayce Lucas had a season-high 34 assists against Parkersburg, while Alexa Martin finished with five kills and Grace Backus added two. Julia Griffith reached double-digits in digs with 10 and added three aces.
Burton was also pleased with the performance Cambria Freeman had for the Indians as she had three kills, three digs and five aces. Two of those aces came in a key stretch in the second game which helped give the Indians a little breathing room on the scoreboard.
“When Cambria was serving we were able to take control,” Burton said. “Not only did it push (Parkesburg) behind but we tend to play better when we have a lead.”
Freeman also had nine digs against Musselman, while Hefner had eight kills, eight digs and four aces. Lucas led the way with nine assists.
Prior to Saturday’s tri-match with fellow AAA powerhouses, the Indians had a tri-match against fellow Big 10 Conference schools North Marion and Fairmont Senior.
The Indians struggled early against the Huskies but pulled out a victory with a 25-20, 25-17 sweep.
“I’m not sure why but we seem to struggle in that first game we play every match,” Burton said. “That’s something we will be working on.”
Hefner had 11 kills and nine digs against North Marion. Sickles added six kills. Lucas had 18 assists and five aces. Martin added three kills and three blocks. 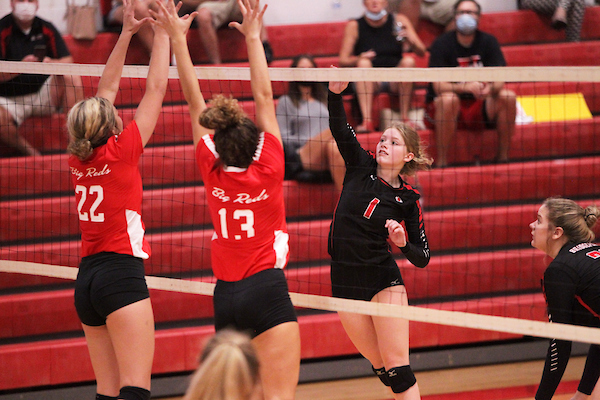 Against Fairmont Senior, BHS again won in straight sets, 25-11 and 25-4. Hefner had six kills with Sickles and Martin each finishing with five, while Amber Jones added four. Lucas again led in assists with 13. Griffith led in digs with three. Hefner added seven aces and Martin had two more blocks at the net.
Bridgeport opened the season on the road with a tri-match at Woodrow Wilson that also included Greenbrier East.
The Indians fell in straight sets to Woodrow, 25-20 and 25-22. Hefner had 10 kills and 10 digs. Lucas finished with 13 assists and three aces.
BHS needed three games to get past Greenbrier East, taking the first 25-21, dropping the second 25-16 and sealing the victory with a 25-21 win in the third.
Hefner paced the Tribe with 12 kills and added 10 digs, which also serving three aces. Lucas had 25 assists and Sickles and Martin added 11 and five kills, respectively. 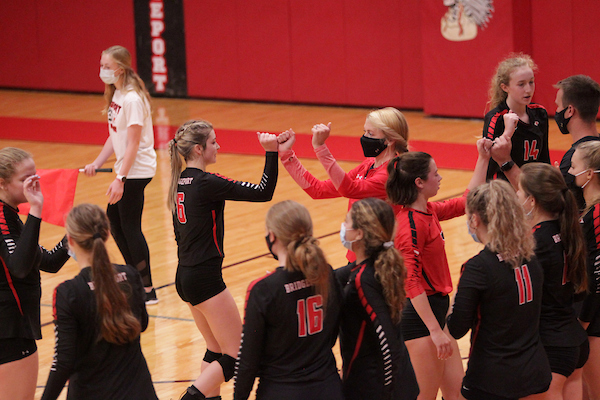 The Indians are scheduled to return to action on Tuesday at Buckhannon-Upshur. They are back home on Thursday to face Brooke (this match was originally supposed to be in Morgantown but with Monongalia’s color level at red, all events are cancelled in that county).
BHS will be on the road on Saturday for a quad match at Greenbrier East.
Editor's Note: Top photo features Shea Hefner sending down a kill. Second photo features Violet Sickles and Julia Griffith awaiting a serve. Thid photo is of Jayce Lucas setting up a teammate. Fourth photo is of Cambria Freeman at the net and the sixth shows the Indians celebrating coming off the court. All photos by www.benqueenphotography.com