The Bridgeport High School volleyball team won three out of four sets against Point Pleasant this morning and now advances to this evening's semifinals, facing Oak Glen at 6:30 p.m.
After losing the first set 17-25, the Lady Indians buckled down, capturing victories in the next three sets: 25-23, 25-17 and 25-20.
"Once we got the first set nerves out and just settled in to play, things were good," said Coach Ali Burton. "They played hard and together! Point Pleasant had a good team. They were all good back and forth sets of volleyball." 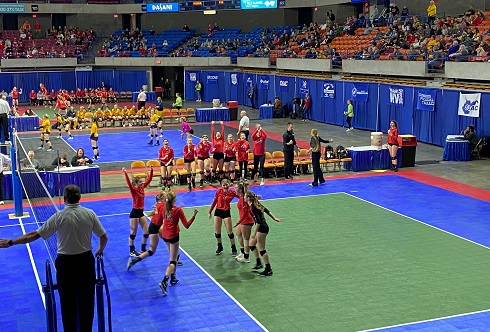 Burton said her girls had a fight in them that she hopes carries through to this evening's match. A victory tonight would place the Tribe in Saturday morning's finals.
Leading the team was senior Shea Hefner, who rolled an ankle in last weekend's Region II games at Robert C. Byrd High School.
"She's not 100 percent, but she did a heck of a job," Burton said. "She led the team with 24 kills. She's a gamer for sure."
Editor's Note: Photos are courtesy of Amy Romano.