It likely comes as no surprise, but for those wondering Class AA state champion Bridgeport finished the year as the top-ranked team in the final MetroNews High School Baseball Power Rankings. For those not following closely, the Indians were the number one team in the poll from wire to wire. 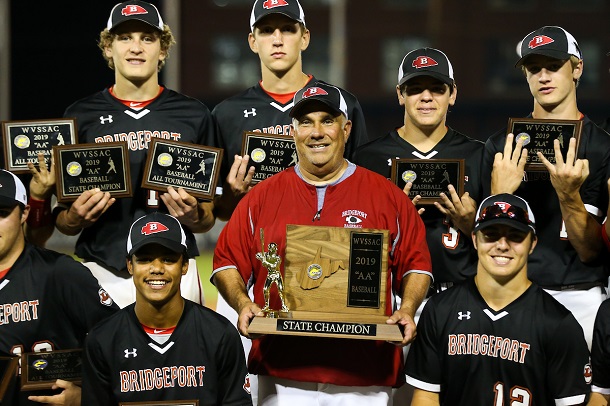 The rankings are based on the votes of 10 radio broadcasters and sports journalists across West Virginia. BHS finished with all 10 first place votes.
Bridgeport ended the year with its sixth-straight state title and eighth in school history – all under Coach Robert Shields. The Tribe also ended with another 30-win season against a daunting schedule. The Indians finished 31-7 and six of their seven losses were to Class AAA foes (three to Morgantown) and the other loss was to an out-of-state opponent.
The final top 10 in ‘AA’ included five teams Bridgeport beat during the season. Those teams include No. 2 Frankfort, No. 3 Scott and No. 4 Shady Spring. Bridgeport also had wins against No. 8 Fairmont Senior and No. 9 Elkins.
Several other local teams received votes in Class AA. Among the teams nearly cracking the final top 10 were East Fairmont, North Marion, Lewis County and Philip Barbour.
In Class A, Notre Dame finished in the top 10. The Irish, who fell to eventual state champion Moorefield in regional play, finished No. 5 with a 24-11 record.
Click HERE to see the top 10 and those receiving votes in all three classifications.