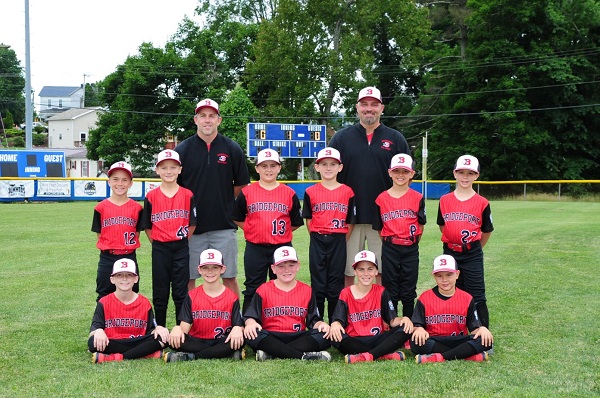 “It was tight until the fourth inning against Elk River, then they had a couple of big hits,” Bridgeport head coach Beau Henderson said. “We lost to the two teams that ended up in the state championship and ultimately one of them won it. I feel like we had a great showing. It was a great opportunity to build on for next year. I’m really proud of them. It was a young crop of players, quite a few 9-year-olds on the team. It was a great season."
The players on the all-star team and a brief synopsis of what they brought to the team according to Henderson:
Landree Messenger: Tenacious, competitive utility player who was our lead-off batter all postseason. Played multiple positions shortstop, center field, and pitcher. Nickname is Peanut.
Broc Henderson:Aggressive, hard nosed second baseman who batted in the second hole all post season. Great contact hitter that had an awesome ability to get on base and score runs His bunting ability was second to none. Nickname is Yum Yum.
Austin Richmond:He is the youngest player on the team but you wouldn’t know it. His bat and glove was extremely consistent all postseason. Along with is ability to play multiple positions third, left, center, shortstop and pitcher.
Levi Snyder:He is the oldest on the team. He was one of our leaders that made huge impact at the plate and the mound. He was our cleanup batter and played a huge role in knocking runs in all postseason. Nickname is Willey
Colin Benson:Made huge impact behind the plate with his awesome catching ability. Also he won a big game for us on the mound to get us to states. And don’t forget about his bat – he can smash the ball. Nickname is Panda.
Sean Hammond: Played a huge role behind the plate, on the mound, and at third base. Great ability to step up and get us big hits when it mattered. Nickname is Moose.
Ryder Beaston:His splits as our first baseman got us a pile of important outs. Only lefthander on the team. His pitching and first base skills were a huge impact for us. His attitude and smile was also contagious.
Lane Harvey:His powerful bat and consistent glove in right/left field and first base helped us win games. His positive attitude helped our team moral all postseason.
Justin Metheny:Our clutch outfielder excelled in any position we put him in. His ability to slice some singles helped us score key runs. His throw from left field to home was clutch in our second game in state.
Cason Bush:Had multiple pitches on the mound that made it difficult for opponents. His attitude also was a bright addition to our team.
Cooper King:He had a strong bat that would smack the ball in the outfield when needed. His jovial personality was a positive to our team. Nickname is Elvis.
Doug Harvey served as assistant coach for the 10s.
“These 9s and 10s are very fortunate to play in a league during the regular season with a great groups of 11s and 12s,” Henderson said. “It makes them better. The older kids are great role models for the younger ones and their leadership during the regular season really helped the 9s and 10s to excel in the postseason all-stars.
“All of them, this was their first year actually playing Little League all-stars and I’m really proud of all of them. They are a great group to be around.”
Editor's Note: Submitted photo.