Kristi Kiefer, a two-time National Collegiate Acrobatics & Tumbling Association (NCATA) Coach of the Year, has announced her retirement from coaching after 19 years leading the Competitive Cheer and Acrobatics & Tumbling teams at Fairmont State University.
Despite her retirement on the mat, Kiefer will remain a key member of the Fairmont State University Athletics Administration as Associate Director of Athletics and Senior Women Administrator. She will also continue serving as an Associate Professor in the Health and Human Performance department at the University. Kiefer is also a current member of the NCAA Division II Management Council.
"Today we celebrate a 19-year coaching career that has changed the lives of so many female student-athletes both on our campus and 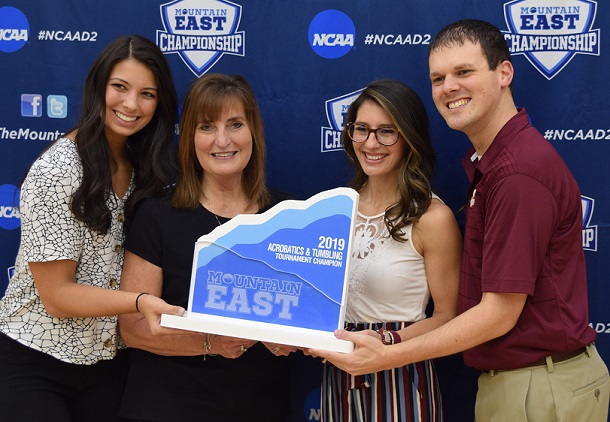 around the country," said Interim Director of Athletics Ryan Courtney. "Kristi is one of the founding coaches of the sport of Acrobatics & Tumbling and has worked countless hours to help the organization get off the ground and gain emerging sport status over the past decade.
"However, her greatest achievement is what she has accomplished on our campus with the countless number of student-athletes that she has positively impacted during her career. We are thrilled that Kristi will continue to serve our department in an administrative role, but today we are pleased to congratulate and celebrate her accomplishments as a coach and leader of young women," Courtney added.
During her coaching career, Kiefer has been at the forefront to help the sport of competitive cheer transition to acrobatics and tumbling in an effort for the sport to be recognized by the NCAA and garner emerging sport status. The hard work paid off on Jan. 25, 2020 when NCAA Division II and Division III voted to approve A&T as an emerging sport for women during the NCAA Convention. NCAA Division I also added the sport to the emerging sport list of June 17, 2020.
"Kristi Kiefer is the epitome of what a Falcon can achieve," said Mirta M. Martin, president of Fairmont State University. "Dr. Kiefer is that most unique combination of passion, dedication, commitment, brilliance, excellence, and service. She's not only achieved the highest accolades in her field, but she's helped raise her sport to national recognition. All while coaching, mentoring, and teaching student athletes. While I'm happy that Dr. Kiefer will continue to work to promote and grow this sport through her work with the NCAA, I'm even happier knowing she will still be an active part of Falcon Athletics and Fairmont State University, and that we will continue to benefit from her expertise and guidance."
Kiefer helped lead the charge with Fairmont State University and four other schools to start A&T in 2010. They worked with administrators from different institutions to format the skills into a sport by females for females, different than competitive cheerleading and artistic gymnastics. While some teams started out as competitive cheer, more schools got on board to create a team specifically for A&T. Over the last 10 years, Kiefer has continued to elevate the sport not only in West Virginia but at institutions across the country.
"I have been blessed to be on the ground floor from day one in creating the sport of Acrobatics & Tumbling," said Kiefer. "This journey has afforded me the opportunity to connect with so many individuals across the country; some who have become my very best friends. The relationships cultivated have created many bonds and have impacted my life, not only as a coach but also as a person.
"Fairmont State Acrobatics and Tumbling has provided so many "firsts" for many student-athletes on our campus.  Some of these "firsts" ranged from the "first plane ride" to the "first trip across the country to compete on a national level". My personal "firsts" or goals included the Mountain East Conference being the first NCAA conference to sponsor A&T as a sport with a conference championship. In addition, the NCAA's recognition of Acrobatics & Tumbling as an emerging sport was very special, Kiefer explained.
"As our sport continues to move forward from emerging sport status, I will continue working on the administrative side to assist in the growth and development to reach the required 40 schools and beyond."
In 10 seasons leading the Fairmont State acrobatics & tumbling team, Kiefer has led the Falcons to eight NCATA National Championship Tournament appearances and three individual event championships. The individual event championships include; Basket Toss Heat 1 (2011), Five Element Acro (2012) and Six-Element Acro (2018).
Kiefer has also coached four NCATA All-Americans, including Danielle DiCarlo, who along with Oregon's Tera Lubert became the first four-time All-Americans (2012, 2013, 2014, 2015) in the history of the association. Kayla Green (2012), Karah Naples (2019) and Catherine Reynolds (2019) also earned All-America honors under Kiefer's leadership.
In 2012, she received National Collegiate Acrobatic and Tumbling Association (NCATA) "Coach of the Year" honors as the team completed its second full season competing under that organization. She added Coach of the Year honors for the second time in 2019 after leading the Falcons to a program-best 8-2 record and the first-ever conference championship in the history of the sport by winning the Mountain East Conference Regular Season and Tournament Championships. Kiefer also led the Falcons to their highest national championship seed (#5) in program history, and helped Fairmont State record their highest meet score since 2014 during a tri-meet against Davis & Elkins and West Virginia Wesleyan (278.680) on senior day (3/30/19).
In addition to being named National Coach of the Year in 2019, Kiefer also garnered the first-ever MEC Coach of the Year honor. Perhaps ever more rewarding was the impact she made on her student-athletes. In fact, 10 of Kiefer's former student-athletes went on to become Acrobatics & Tumbling coaches after graduation, including four that became head coaches.
Prior to the programs transition to A&T, Kiefer also led Fairmont State to a pair of competitive cheer national championships, including a 1995 title as a part of UCA, and a 2010 championship as a member of the NCA.
In addition to her coaching and teaching responsibilities, Kiefer took on the roles of Senior Woman Administrator and advisor for the Student Athlete Advisory Committee (SAAC) at Fairmont State University in 2004. The SAAC deals with issues for current student-athletes while also serving as a valuable component for community outreach for the athletics department. The SAAC has also been involved in Fairmont State's award-winning community engagement initiatives over the years, as well as raising money for the Make-A-Wish Foundation.
Kiefer and her husband Jim reside in Bridgeport and are the parents of three children; Kash, Kylie, and Koby. Kiefer recently welcomed her first grandchild back in April, with the birth of Kylie's son Kaden Grant Bias.
Editor's Note: Kristi Kiefer, second from left, is shown after one of her many successful efforts while coaching at Fairmont State.