By Connect-Bridgeport Staff on October 14, 2020

When the Los Angeles Lakers captured the NBA championship Sunday in the “bubble” in Orlando, Florida, if you thought you saw a familiar 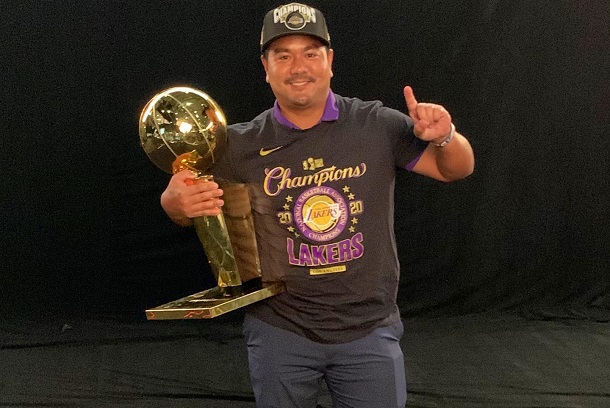 masked face somewhere in the celebratory crowd, you were probably not mistaken.
Along with Lebron James, Anthony Davis and the rest of the Lakers players and coaching staff, the team’s support staff was also there to enjoy the title.
The 2000 Bridgeport High School graduate is the manager of game entertainment for the Los Angeles Lakers. For the last several months, he has been living inside the NBA Bubble.
Cunanan, who graduated from West Virginia University in 2005, joined the Lakers in 2019. He’s been in the professional sports 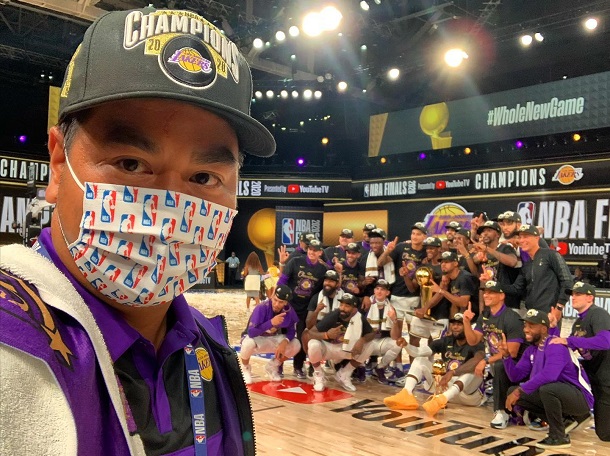 business since 2007 when he started with the Arizona Diamondbacks. Cunanan has also worked for the Cleveland Cavaliers and the Los Angeles Clippers. He spent five years with the Clippers prior to making the quick jump to the Lakers.
Although the status of starting the 2020-21 NBA season is not completely settled with a likely start of Dec. 1, the future is unknown. What is more known is that Chris Cunanan will very likely be the only person in Bridgeport and Harrison County that will own an NBA championship ring as teams provide them to all key staff members.
Cunanan’s time in the NBA has brought him face to face with stars such as James and Davis, as well as Shaquille O’Neal and countless others. He also got to meet and have several conversations with West Virginia University legend and NBA Hall of Famer (and league logo), Jerry West during his time with the Clippers.
In the event, Cunanan is able to talk of his NBA experience, we hope to bring you a detailed story on Connect-Bridgeport. Click HERE to read a story on Cunanan when he joined the Lakers in 2019.
Editor's Note: Photos from Christopher Cunanan's Facebook page.