According to MetroNews, West Virginia University sophomore linebacker Jake Abbott was presented with the Tommy Nicklovich Award prior to Saturday’s spring game. The award has been presented annually since 1991 to the West Virginia walk-on who distinguishes himself 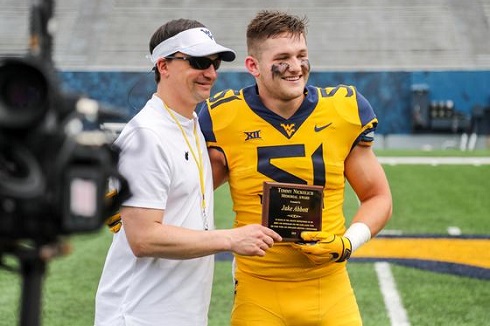 through “attitude and work ethic” each spring.
It isn’t hard to see why Abbott was this year’s honoree.
“I could sleep in this place,” Abbott said in all sincerity. “I love it here. I could sleep on the couches.”
The coaching staff doesn’t actually allow Abbott to do that, but his presence during waking hours has captured their attention.
“You talk about Jake, and you talk about a guy that’s all-in,” said head coach Neal Brown. “He’s all-in on being a Mountaineer. He’s a guy that has great effort, great attitude every single day.”
Abbott, listed at 6-foot and 220 pounds, figures to make an impact on special teams this fall. But Brown sees him doing even more.
“I’ll tell you right now, he’s going to be a factor on defense,” Brown said. “I think he’s got a chance to be a really plus player for us on special teams, and his role’s going to increase on defense.”
Click HERE for the rest of the story.
Editor's Note: Photo by Ben Queen of www.benqueenphotography.com.