By Connect-Bridgeport Staff on January 19, 2021 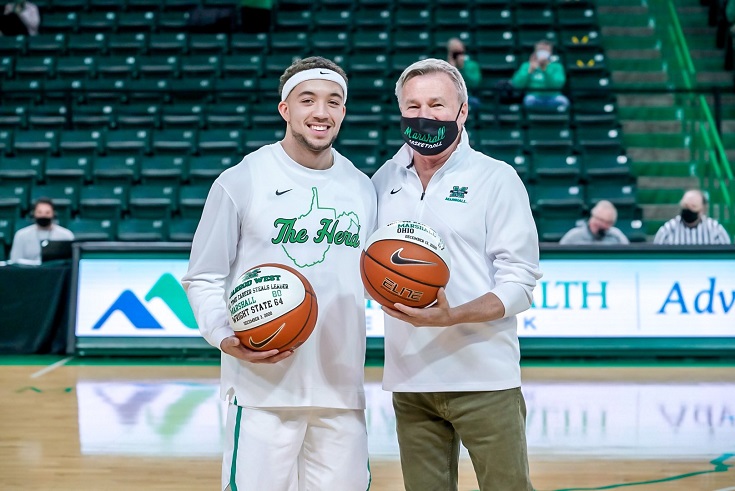 This past weekend at the Cam Henderson Center in Huntington, former Notre Dame High School and current Marshall University standout Jarrod West was honored for his latest collegiate milestone.
The senior point guard for the Thundering Herd was recognized prior to their game with Eastern Kentucky for becoming the 55th player in school history to score 1,000 career points. West surpassed the 1,000-point mark Dec. 13 that was part of his 14-point effort in an 81-67 win against Ohio.
Later in the same game, teammate Taevion Kinsey also surpassed the 1,000 point mark.Both players were presented with game balls prior to the contest with the Hilltoppers, who upended Marshall by a 69-67 score Sunday.
Marshall is 7-4 on the year.
Earlier this season the former West Virginia High School Player of the Year became the school's all-time leader in career steals. The previous record was 207 by Skip Henderson. West currently has 233 steals.
Editor's Note: Photo of Jarrod West receiving a game ball in recognition of his 1,000th career point at Marshall from the Marshall Men's Basketball Twitter account.