By Connect-Bridgeport Staff on November 29, 2022

MetroNews reports that in his first public interview since being dismissed as West Virginia University’s Director of Athletics two weeks ago to the day, Shane Lyons went into detail how that decision came about, while admitting it caught him off guard that President E. Gordon Gee was looking to go in another direction.
“It was a complete surprise,” Lyons said on MetroNews Talkline with Hoppy Kercheval. “Two weeks earlier, I have a text message [from Gee] saying, ‘I know there’s a lot of pressure on us and I wouldn’t want to be in a foxhole with anybody else rather than you.’” 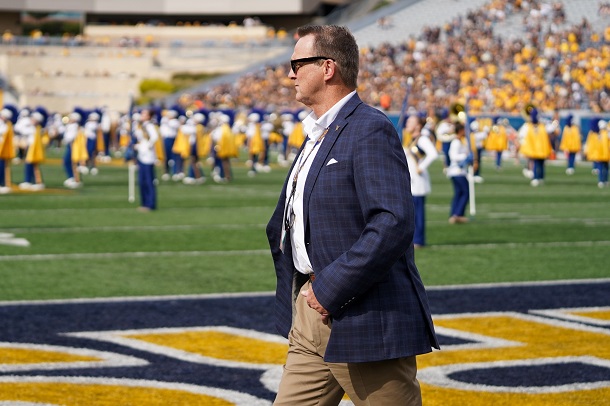 The pressure stemmed from the football program’s lack of success. The Mountaineers wrapped up a 5-7 season Saturday with a win at Oklahoma State, bringing head coach Neal Brown’s career record at West Virginia to 22-25 in four seasons. The 2022 campaign marked the Mountaineers’ third losing season under Brown and the second time in which they failed to qualify for a bowl game.
“It boils down to the football situation,” Lyons said. “A lot of heat was surrounding our football program at that time. I look at it that I’m the scapegoat.”
Lyons came under fire for extending Brown’s contract through 2026 following a 6-4 season in 2020 that finished with a win over Army in the Liberty Bowl. It was progress from a 5-7 finish in Brown’s first season, though it came in a COVID-impacted year when Eastern Kentucky was the only non-conference opponent and the Mountaineers did not face eventual Big 12 champion Oklahoma.
“The culture was right and recruiting was heading in the right direction,” Lyons said. “His name had come up for a couple jobs in Auburn and South Carolina. As an Athletic Director, you start juggling this to say, ‘what if he wins the next year?’ Well, if he wins the next year, his buyout was 1.5-2 million dollars, which is not much in our business. So my thinking was we need to increase his buyout if he ends up leaving to be close to 5 million dollars, which we ended up doing.”
Much of that extension fell on Lyons, but the former West Virginia Athletic Director said it was a collaborative decision that also took into consideration the thoughts of Gee, current Interim Director of Athletics Rob Alsop and the chair of WVU’s Board of Governors David Alvarez (of Bridgeport).
Click HERE for the rest of the story.
Editor's Note: Photo courtesy of WVU Sports Communications.