Former WVU Coach Beilein to Take His Game to NBA

According to The Detroit News, former West Virginia University Coach and Michigan coach John Beilein thought about making a jump to the NBA last year. 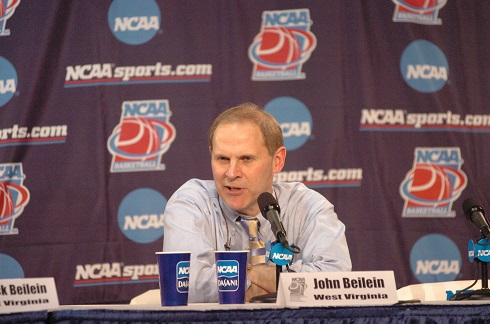 This time around, Beilein is actually taking the leap.
Beilein, Michigan basketball’s all-time winningest coach, has agreed to become the next head coach of the Cleveland Cavaliers.
The news was first reported Monday by ESPN's Adrian Wojnarowski, who reported that Beilein agreed to a five-year deal on Sunday. A University of Michigan athletics spokesman confirmed Beilein's departure.
"Thanks to everyone at the Univ of Michigan for their incredible support these last 12 years," Beilein tweeted. "Our fans, alums, leaders, players and students are AMAZING It has been a heck of a ride and I hope you enjoyed our teams and staff as much as I did! Go Blue Forever! #GoBlue"
Click HERE for the rest of the report.
Editor's Note: Photo on the Connect-Bridgeport Facebook page initial post from the Michigan Basketball Facebook page. Photo above courtesy of WVU Sprots Communications.