By Connect-Bridgeport Staff on November 30, 2020

According to MetroNews, former West Virginia men’s basketball forward Nathan Adrian spent his first year of professional basketball overseas with JSA Bordeaux in France.
He finished his first professional season averaging 17 points and 8 rebounds, and he was named a league player of the week twice. 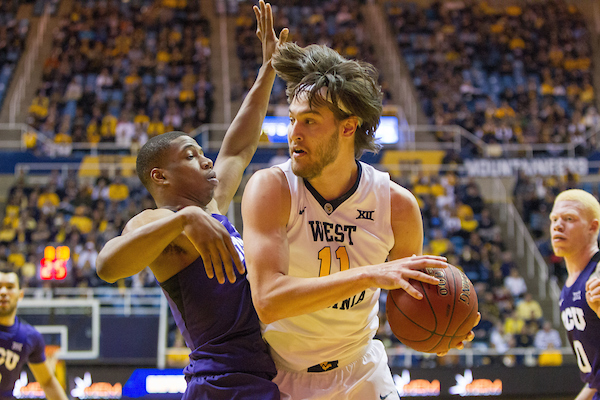 The Morgantown High School alumnus is on the move again overseas. This year, Adrian was acquired by MBC Mykolaiv (Superleague) in the Ukraine.
Adrian had a big smile on his face when he was describing where he was living. Last year, according to Adrian, he could practically reach from one side of the common space to the other end. Adrian was a guest on the Wednesday night of edition of the Citynet Statewide Sportsline.
“Inside of my place is actually pretty nice. I got a whole bedroom, living room, and a kitchen now. I upgraded from last year,” says Adrian.
While Adrian was in Bordeaux, he was in an area where he did not have to walk far to get the types of food he likes. Now that he is in the Ukraine it is a similar outcome for the former Mountaineer.
“You will be happy to know that I am eating at a restaurant. Things are cheap enough here that I can actually eat good food. I got filet medallions and bruschetta for six dollars,” Adrian joked.
Click HERE to read the rest of the story.
Editor's Note: Photo of Nathan Adrian by Ben Queen of Ben Queen Photography.