FROM METRONEWS
When you’re 5-foot-8 and 180 pounds, there are only two ways onto a Division I college football roster – world-class speed or world-class work ethic.
For Dante Bonamico, the latter was required. 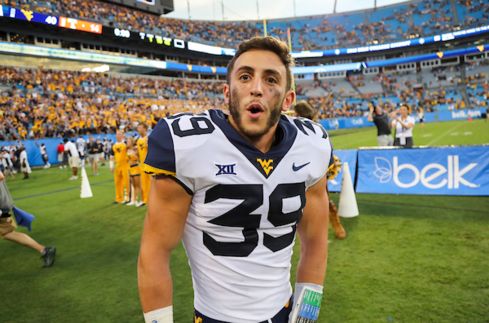 When the Bridgeport native walked on at West Virginia in 2016, he knew what the odds were.
“When you get that slight opportunity, you have to take advantage of it,” Bonamico said of the advice given to him by then-graduate assistant Casey Vance, a former WVU walk-on who became an all-Big East linebacker. “When they give me that one chance, I can’t make any mistakes and they’ll look at me as a guy they can trust.”
Bonamico played in six games as a redshirt freshman, then moved up to playing in all 12 last season as one of West Virginia’s top special-teamers.
This year, he will be thrown into the deep end of the pool.
When all-Big 12 safety Kenny Robinson and fellow starter Derrek Pitts left the program over the summer, Bonamico was thrust from contributor to likely starter.
For many fans, the prospect of a former walk-on playing serious snaps against some of the best receivers in the country is plenty alarming.
“When those guys did leave, it was like all hell broke loose on social media,” Bonamico said. “We just kind of blocked it out. We knew what we had. We knew we had guys that are inexperienced, but we knew we could play. It was just time to fill those voids that were left by Derrek and Kenny.”
Click HERE for the rest of the story.