Getting to Know Jon Griffth: Question and Answer Session with BHS Cross Country/Track and Field Coach 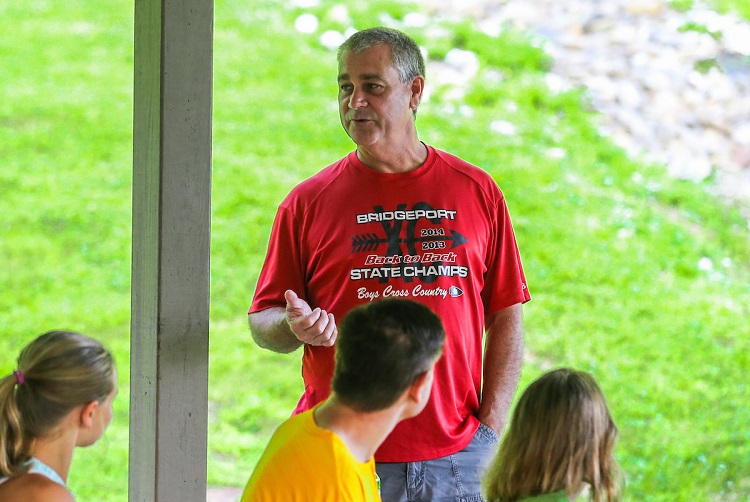 What’s your favorite movie?
Chariots of Fire is number one, with The Right Stuff the runner-up. Third would be The Long Green Line, that’s the movie that has influenced me the most with coaching cross country.
Who is the best high school athlete you have coached against?
James Jett when he ran for Jefferson High School. He ran against us in a regional at Buckhannon and he was phenomenal. Freddy Canary (from South Harrison), Jacob Burcham (from Cabell Midland), Brandon Franklin (from Liberty) and Scott Mayle (Philip Barbour). I could make you a list of a 100 athletes we have competed against that have kept me up at night giving me nightmares.
Favorite subject in school?
That’s easy. My favorite subject in school has always been science, chemistry in particular. From the time I was five or six years old I wanted to be a chemist. My parents got me chemistry sets and I would set in the basement and mix things and burn things. When I got out of high school, that is actually what my degree is in is chemistry from WVU. I went back to get certified to teach after that once I realized being a chemist meant you were stuck in a lab all day.
Any pre-meet superstitions or rituals? 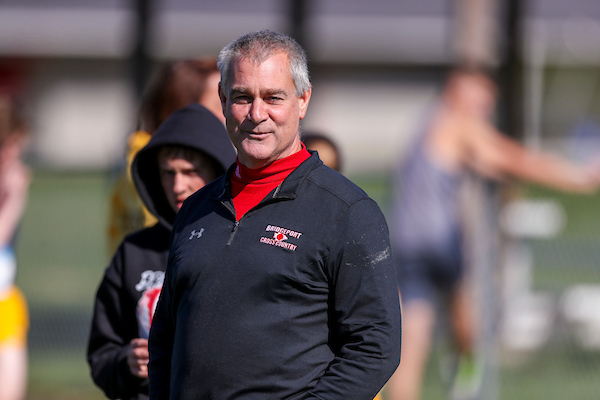 I’m a routine-oriented person. I don’t have any specific superstitions except probably being the first one there. At home meets, if a meet started at 11 a.m., I was there no later than 6 in the morning, usually closer to 5 in the morning, just setting everything up, making sure everything was good to go. And all of the athletes and coaches can attest to the fact that we leave early for everything because I’m terrified of being late.
I always wanted to be there first to set up at our standard place wherever that was at that particular stadium. There have been many times I’ve shown up at a meet before the people running the meet. I like getting there early and talking to the hosting coaches, because most of them are my friends.
What is the best way to describe your coaching staff?
Impressive and loyal. I’ve been fortunate to have the best coaching staff a person could ask for. They are knowledgeable, professional, respectful, responsible, diligent, dedicated, disciplined, they are everything. 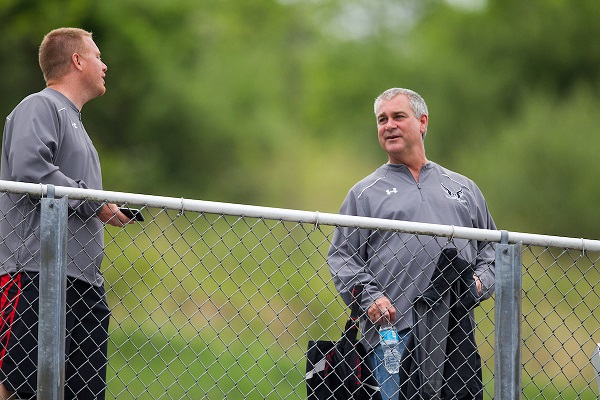 And it’s not just the coaching staff I’m leaving now. Down through the years people like Robbie Riley, Brandon Metzgar, Amanda Bailey, Jack Merinar, that have worked at the middle school or the high school or both, there are so many of them. Steve Sellas, people that have given so much to our program.
Robin Sizemore, used to be Robin Anglin, she was a science teacher at the high school. She posted something making fun of me, she said, “You’ve had time to answer all these posts on your retirement post, detailed responses, you have so much time on your hands you should still be coaching.”
She’s right but the reason I’ve been taking the time to do that is because these coaches, not just the ones I have now, but all of them mean that much to me, along with all the athletes and the parents and the journalists and the other coaches, everybody has helped me so much, I want to take the time and respond to each and every person individually.
Right now in this age, I can’t go to all of these people and give them a big hug or shake their hand and thank them, this is the only way I can do it right now to let them now how much they mean to me.
What three fictional Christmas characters do you have over for Christmas dinner? 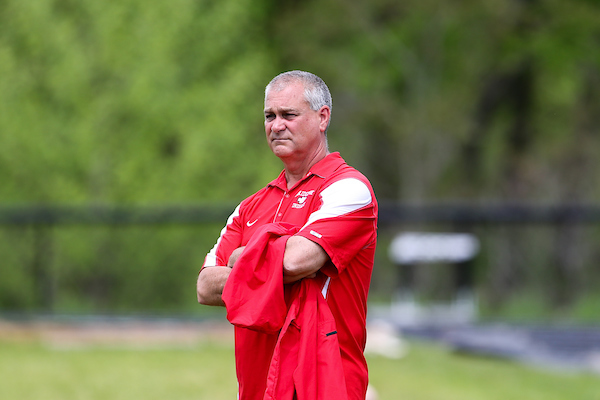 Ebenezer Scrooge, The Grinch and Clark Griswold
Any New Year’s Resolutions or goals for 2021?
Hopefully to see and end to this pandemic and continue to find ways to give back to the City of Bridgeport and the track and field community of West Virginia.
What’s one track and field event you are glad you don’t have to compete in?
The 3,200 meter and or the cross country 5K race both of which I have never done and I have no desire to do either and I feel really horrible about making them do it so many times. The furthest I have ever ran was one mile and I did that at 18 years old and ran a 6 flat and thought I was going to die.
In my prime, anything over 100 meters was a little too far for me to run, now I can barely get up off the couch.
What is your go-to music in the car?
It’s always country music, I love country music. Right now, I’m listening to a lot of Luke Combs.
Any secret talents that most people would be surprised to know you have?
I do a lot of re-modeling. I do paint a little bit, I haven’t done much for a log time. My father was an artist by trade. He went to the University of Cincinnati on an art scholarship. My house is full of his paintings.
Who’s the funniest athlete you ever coached?
In track, either Chris Heater or Steve Barnes. In cross country, Michael Duez. 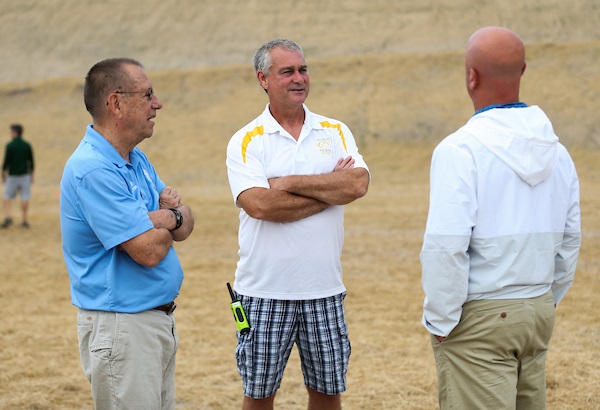 Where’s one place in the world you have never been to that you would like to visit?
I would have to say the Olympic Games, no matter where there were. I’ve gone to most places I’d like to visit in the United States.
Favorite meal?
Spaghetti and meatballs will Oliverio’s Peppers. Ice Cream for dessert.
Favorite pro or college athlete?
Edwin Moses. In my opinion he is probably the greatest student of his sport. He had an unprecedented string of victories in the 400 hurdles that lasted for a decade. He was the smartest, most studious athlete that I can think of. Second to him would be Jim Thorpe. And third would be Wilma Rudolph, as far as inspirational story it would be hard to match what she did.
Favorite pro or college team?
I went to WVU so I always a big Mountaineer fan. When I was growing up, I was a Pittsburgh Pirate fan when Roberto Clemente was there. For football, I followed the Rams when I was young. But the team that I have supported for my whole life without fail has been the United States Olympic Team, in particular track and field.
2020 was a rough year for everybody, what’s one positive you can take from it?
The one positive I can take from 2020 is the pride that I have and the determination, discipline and dedication of my athletes. They ran countless miles through this pandemic. When I would drive through Bridgeport and see them on the street, individually or in groups, putting in those miles day after day in the darkest, most depressing disappointing times of my athletic career, it gives me hope for the resilience and absolute love for our sport that they exhibit every day.
The coolest animal at the zoo?
The cheetah. The fastest animal in the world.
Most memorable sports moment you have had as a fan? 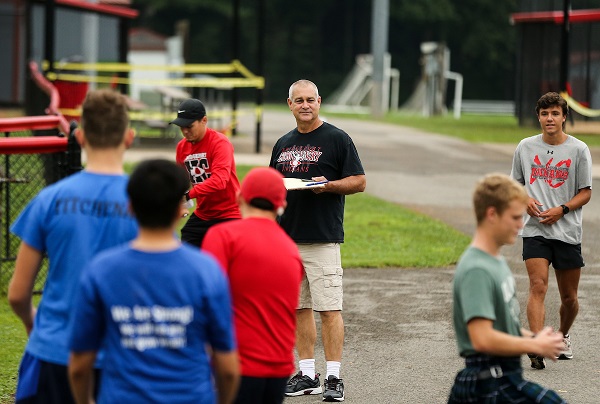 First would be watching Ashton Eaton win the decathlon at the Olympic Trials. I was there when he broke the world record. To go to the Olympic Trials in Eugene, Oregon at Hayward Field in a stadium and sit among 70, 75,000 people and every person there understood what was going on. This was 75,000 people watching Ashton Eaton break the world decathlon record, watching the clock as he finished that 1,500 meter making sure he got under. You can’t describe that in any words I’m capable of coming up with.
Second, would be watching any race that Eli Bailey finished in cross country. There are no words to describe that.
What’s one thing it seems like everybody you know likes but you can’t stand?
Seafood. I can’t stand sea food. I don’t even like fish sticks, not matter how much ketchup I put on them.
The best thing on TV right now is?
I love the fact that through streaming, I can watch anything I want to watch whenever I want to watch it whether it’s Big Bang Theory or something else that’s on now I’ve been watching is Zoey’s Extraordinary Playlist. But I can also watch Green Acres. Being able to watch TV shows from my childhood. I re-watched a bunch of M*A*S*H. episodes.
If you want to go the other way and ask what I’m mad isn’t available on streaming then it’s NewsRadio and WKRP in Cincinnati.
What is the most important thing being a coach at BHS has taught you?
To never underestimate the potential of any individual. No matter what their athletic ability or their academic ability, every person can improve with the right set of tools, the right motivation, the right perspective everyone can get better and everyone can achieve more than they think they can.
There’s a young kid in the community just getting into track and field or cross country, what advice do you give them?
Number one, never give up. Number two, always listen to your parents and coaches. Number three if you are part of the Bridgeport track and field or cross country program it doesn’t matter who you are, who your parents are, what they have ever done, how much money they make, what kind of car you drive, you are important. You have the ability and you have to take advantage of that an earn everything you deserve.
Editor's Note: Photos of Coach Griffith by www.benqueenphotography.com