Bridgeport High School’s girls basketball team closed out the home portion of its regular-season schedule on Thursday with a 41-29 victory against Robert C. Byrd.
It was also senior night and two key starters for the team, Maddie Wilson and Macey Phillips, were honored prior to tipoff.
However, it was a freshman that stole the show against the Eagles, proving that the future for the Indians is definitely bright.
Gabby Reep finished with 17 points, four rebounds, four assists and seven steals to lead BHS to the victory that evened up its record at 10-10. 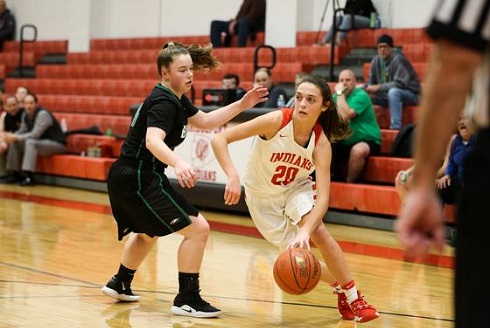 While Reep’s state line is impressive enough, she also did not come off the floor and was a presence to be reckoned with for 32 minutes on both ends of the court.
“She was the only one making shots,” Bridgeport coach Herman Pierson said. “She actually did a little bit of everything and she does that most games. For a freshman, she is incredible with what she does. She takes care of the ball, she plays defense, she hits those little runners and she knocks down shots from the outside.”
Reep came up with four steals during RCB’s first five possessions and scored 12 of her team’s 16 points in the first quarter as the Indians opened up an eight-point lead.
The Eagles were down just three late in the second quarter when Reep had another strong spurt. It started when she forced a turnover via a five-second call. At the other end of the court, she hit a pull-up jumper in the paint and followed with back-to-back assists on Paige Humble layups to make it 22-15 at halftime.
RCB refused to go away quietly though and the Eagles hung around until the start of the fourth quarter when Wilson buried a mid-range jumper and Reep scored on a tip-in to make it 32-22. The Tribe led by double digits the rest of the way.
Wilson finished with five points, eight rebounds and a pair of assists. Phillips joined her senior teammate by scoring five points and added three rebounds and three assists.
Humble joined Reep in double figures with 10 points to go along with six rebounds and four steals.
Earlier in the week, the Indians lost to Class AA No. 7 Lincoln, 39-35.
It was another game that the Tribe had a great chance to beat a ranked team but struggled to hit a clutch shot when one was needed most.
“We make one basket more, they make one less, we maybe get that one,” Pierson said. “They beat us by 11 the first time we played and we didn’t have Maddie. I think she made a huge difference. The girls are starting to realize we can play with teams like this.”
Lincoln led the majority of the first half but Reep hit a huge 3 from a step or two beyond midcourt to beat the second quarter buzzer to pull the Indians within two at 19-17. 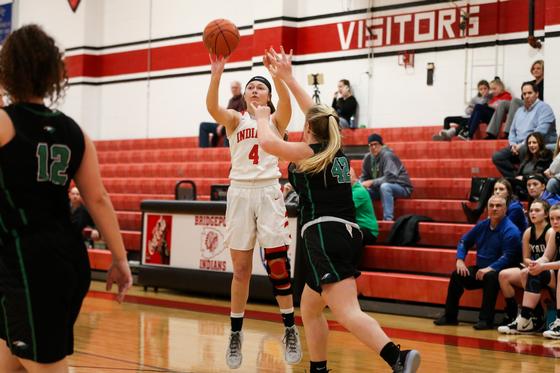 The momentum carried over as Bridgeport took a 23-19 lead to start the third thanks to a free throw from Phillips, two foul shots from Humble and a 3-pointer from Wilson.
Neither team enjoyed more than a two-possession lead the rest of the way but the Cougars took the lead for good with about 2:30 left on a Brynne Williams layup.
Humble led the Indians with nine points, while Wilson and Reep each added seven.
BHS will end the regular season with two away games, including one this afternoon against St. Maria Goretti in Maryland. The Indians will travel to face regional foe Braxton County on Tuesday as a final tune-up before sectional play begins.
Editor's Note: Top photo shows Gabby Reep, while the bottom one features Maddie Wilson. Photos by Joey Signorelli for www.benqueenphotography.com