By JOE ALBRIGHT
The Parkersburg News and Sentinel

Braxton Amos built an expectant reputation on the wrestling mat thanks to his many early successes. Notoriety he's repeatedly lived up to while attending Parkersburg South. 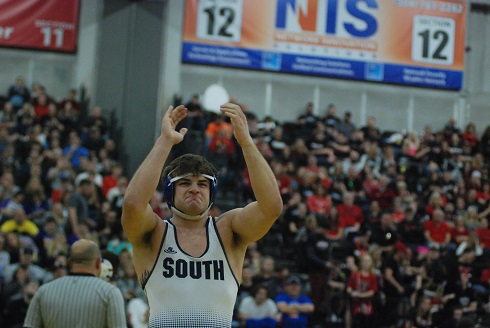 The empty space was filled with the first Robert R. Dutton Award, given annually to the top wrestler in W.Va., handed out to an underclassman. An achievement providing him a target for what was expected to be a dynamite senior campaign. Winning the award once more would crown him as the first two-time winner.

Nothing would come easy, though. There was a catch thrown into his final prep season. As Amos played football late into winter, he wasn't immediately in wrestling shape at the beginning of the grappling season. He practiced maybe one or two days with the wrestling team.

"It was really tough to keep my head level and my nose to the grindstone and just keep working," said Amos. "Nobody had scored on me yet in a South singlet and I hadn't been beaten by a high school kid in a year in a half. I really approached this season like I did my sophomore year. I had to take it to them every single time because I couldn't let some kid catch me. In a way, I was more worried about this year than last year."

Despite the drawback, Amos never crumbled or gave in. Instead, he found something enjoyable from the ordeal.

"It was fun because I had to start being savvy. I pulled tricks out of the bag I hadn't in a while, at least not early in tournaments. I mean at Ironman and Powerade I was still beating guys pretty good. I hadn't had to do anything other than the basics until now. There were three or four close calls where if I didn't score with seconds left in the period or now, I was on the defensive. It was fun," he said.

The good times rolled all the way through to the state tournament. With his technical fall of Wheeling Park's Charlie Tamburin in the 220-pound final, Amos finished off another undefeated season. He also went unscored upon against in-state or out-of-state opponents.

Similar to his dominant showing last season, this year's reign again brought him headlines with regards to the Dutton Award. Amos' coronation completed his back-to-back attempt.

"It is a real honor to be named an award winner once, let alone twice. I am very, very thankful for the opportunities everybody before me have laid out. It has just been great," said Amos. "I like wrestling. I like having fun. I like working hard and I hate losing."

The achievement, as well as Amos' career, hardly surprised Smith.

"When he was about to come in our program, you knew something special was going to happen. Even as an eighth grader, he was at the state tournament watching potential opponents for his freshman year. That in and of itself is pretty remarkable. Most kids aren't thinking that far ahead," said Smith.

Finishing runner-up for the second straight year was Oak Glen senior Peyton Hall. The four-time Class AA/A champ capped his senior campaign with a 49-2 record at 152. He finished his career as a Golden Bear with a 179-13 mark along with state titles at 138 (2019), 132 (2018) and 120 (2017). Air Force Academy commit John Martin Best, a three-time state champ with a state runner-up finish, of Parkersburg High finished third in the voting.

His win marked the first time a school claimed the honor three years in a row.

Sponsored by the Parkersburg News and Sentinel, the Dutton Award is voted upon by a statewide panel.

In addition to his in-state honor, the Wisconsin commit was also named Intermat.com's and Matscout.com's national wrestler of the year.
Editor's Note: Photo shows Braxton Amos celebrating after winning a state title to cap another undefeated season. Photo courtesy of Jay W. Bennett of The Parkersburg News and Sentinel.