By Connect-Bridgeport Staff on January 10, 2020

Pete Dye, described by many as the greatest architect of golf courses ever, has passed away at the age of 94, according to multiple media 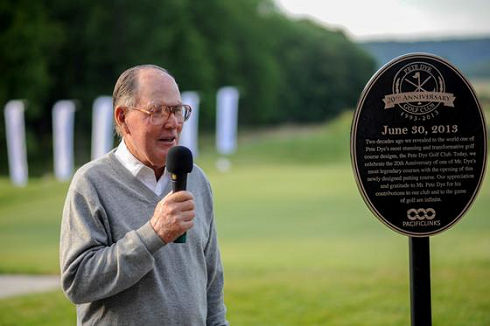 reports nationwide.
The name is familiar due to the Pete Dye Golf Club located just beyond the Bridgeport city limits in Meadowbrook. The course was opened for play in 1993 and is still considered one of the premier courses in the nation and arguably the best in West Virginia.For
Dye's creation in Harrison County is unique in more than just being a fantastic place to get in a few rounds of golf. The course was created utilizing the area's local and rich history of coal mining. The theme can easily be seen by those who have been fortunate to golf on the course.
The course is regularly listed by publications such as Golf Digest as among the top 100 courses in the United States.
For those wishing to read more about Pete Dye's passing, click HERE
Editor's Note: The photo shows Dye in Harrison County in June of 2013 when the Pete Dye Golf Club celebrated its 20th anniversary. Photo is by www.benqueenphotography.com.