By JOSH HUGHES
Parkersburg News/Sentinel
Shaun Smith, Parkersburg South head wrestling coach and architect of the Patriots grapping dynasty, has another accolade to his name.
The West Virginia Sports Writers Association has selected Smith the 2021 recipient of the Van Meter Award. Named after legendary Woodrow Wilson multi-sport coach Jerome Van Meter, the award is annually given to the state all-sport Coach of the Year. Smith will be 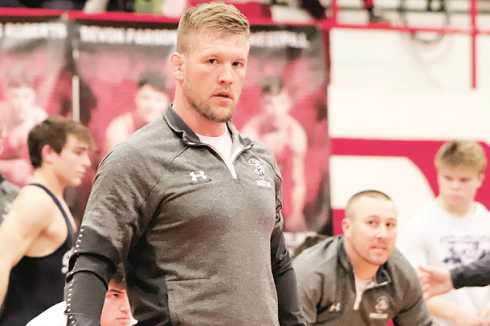 honored on May 23 at the 74th annual Victory Awards Dinner at the Embassy Suites in Charleston.
Smith is six-for-six in state Class AAA championships. In his sixth season at the Patriots' helm, South recently extended its title hold to seven consecutive years and are preparing for another successful season in 2022.
He nearly received the honor in 2019 when recipient Michael Gray was cited after guiding Webster County boys basketball team to an unbeaten season and state crown.
This season, Smith earned the honor in balloting followed by runnerup Ryan Lambert, Pendleton County boys basketball; Marty Vierheller, Parkersburg Catholic girls basketball; and Erik Engle, George Washington boys soccer.
The honor is a culmination of all the hard work put in by Smith and the very wrestlers who secured another state championship along the way. Seniors Gavin Quiocho and Brayden Johnson went back to their winning ways, as Quiocho captured his fourth individual state crown. Johnson won his third title. That senior leadership made a difference for the group, and the continued emergence of senior Noah Buckalew (19-4) the gave the Patriots added depth and experience. As did 120-pound Devin Easton. On the other end of this roster, South's Gage Wright finished his first year unbeartren as a state champion at 145. With such a varied and talented bunch. Smith gave his roster all the credit and said the seventh consecutive team title meant the world to him.
"I'm blown away. I'm a little more excited about the state title, but this is cool," Smith said. "I'm not saying that wrestling doesn't get the notoriety or recognition, but it doesn't get the same attention behind it like football or basketball. I'm excited, and it just feels like, collectively, everyone puts in a lot of work. It's cool to reach that accomplishment." at 21-2, 113-ppounder
During his time at the helm of the PSHS program, wrestlers have ended seasons with some of the best won-loss records in the state, and this season was no exception. Quiocho ended his time at South winning OVAC wrestler of the year honors and a 22-1 mark at 160 pounds. Wright ended his freshman campaign at 24-0. while Johnson won his 138 title with a 23-1 record. Others include Easton at 23-2, 106-pounder Brady Roberts at 21-2, 113-pounder Brent Bosley at 20-3, Trenton Jones ended his sophomore season at 132 with a 23-3 record. Robert Shockey and Jude Childers held identical 20-4 records and Aydan Edwards finished similarly at 195 at 20-3.
Smith said his roster went above and beyond in ensuing victory when it mattered most.
"The seniors are part of an exceptional group, and it goes without saying. You hate to lose any of them," he said. "Noah didn't get a chance to wrestle as a freshman, but the other three they've started every year. They're an integral part of our team. They've placed every year. They're not only exceptional wrestlers, but exceptional people, too."
On top of those remarks, Smith said similar things about his underclassmen and the work they all put in. From the student-athletes to the parents and coaches, Smith was appreciative of them for making the 2021 season another one to remember. That framework built by Smith and the program gives him hope for the near and distant future.