According to this report from MetroNews, Adrian Moss-Beasley, a tight end on West Virginia’s legendary 1988 team, died late Saturday night due to complications from colon cancer. His death was confirmed by the Brevard County (Fla.) Sheriff’s Department, which employed him for 28 years. 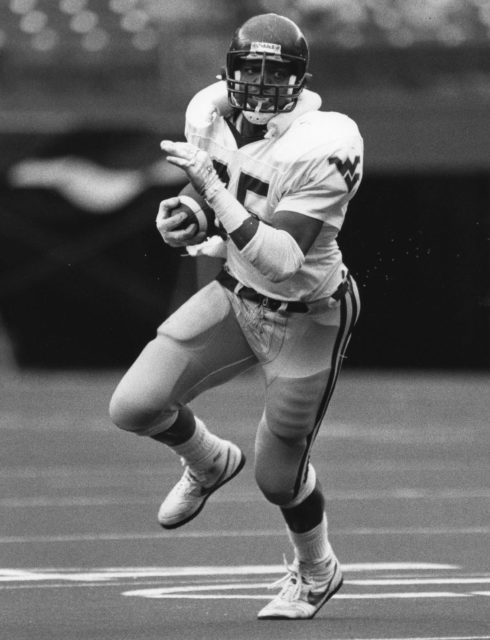 Moss-Beasley, who played as Adrian Moss, caught 32 passes for 471 yards and a touchdown in his Mountaineers career. He signed with West Virginia from Cocoa, Fla., and lettered for three seasons from 1987-89.
Primarily a blocking tight end early in his career, Moss-Beasley had a breakout performance at East Carolina in 1988. He made five receptions for 85 yards, including an 18-yard touchdown, as WVU pulled away for a 30-10 win, the sixth of an eventual undefeated regular season.
That team’s 30th Fiesta Bowl reunion originally was scheduled for late last season, but teammates like Dale Wolfley — hearing of Moss-Beasley’s cancer prognosis — expedited the celebration to the Week 2 game against Youngstown State.
“We moved it up because we wanted to make sure ‘Big Moss’ was there to experience it,” Wolfley said. “It was amazing for us to see him come back, because the fellas all knew what was going on. I know he loved it, and we’re eternally grateful for that.”
Moss-Beasley emerged as West Virginia’s starting tight end in 1989, his senior season.
He finished third on the team in receiving with 21 catches for 371 yards.
Click HERE for the rest of the report.
Editor's Note: Photo of Adrian Moss-Beasley courtes of WVU Sports Communications.