They're Back: Despite Injury of Key Player, Indians Volleyball Preps with Confidence for State Tourney 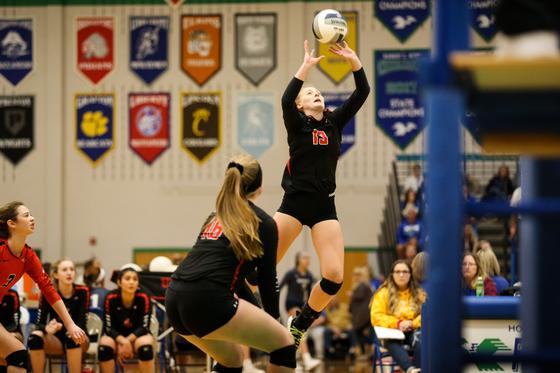 Defending Class AA champions – the Lady Indians of Bridgeport High School – captured the Region II volleyball title Saturday at Robert C. Byrd High School.
The Tribe first defeated Clay County in the semifinals – 25-19, 25-9 and 25-15 - thereafter advancing to the finals and taking on the Lady Eagles after they defeated Nicholas County in semifinal play. As they did against Clay County, the Indians won three consecutive sets against RCB. Match scores were 25-21, 25-23 and 25-15.
Coach Ali Burton said it wasn’t all smooth sailing. As has been an ongoing theme for this year’s season, the Tribe was struck with injury during the second set of the Clay County series.
“Shae Hefner rolled her ankle 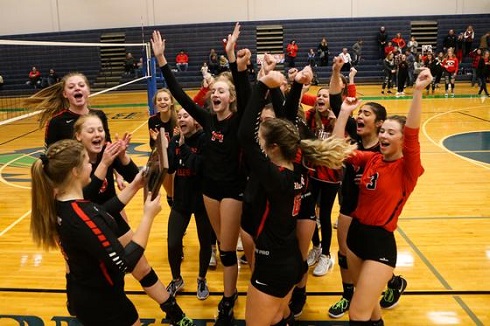 – not the one she rolled earlier in the season, but the other one,” Burton said. “We put Amber Jones in her spot and she did a great job hitting for us and using a serving spot. Eventually, we ended up putting Ashley Spring in the back row to play through Shae’s back row spot. They both did an excellent job stepping in and filling in.”
As Bridgeport is the defending Class AA championship team, there was quite a bit of stress and pressure on the athletes to make a state tournament appearance in 2019. That was accomplished after defeating Clay County as both the Region II winning team and runner-up advance to Charleston for states, to be held Friday and Saturday.
Defeating RCB and emerging as regional champs gave the girls even more confidence and left them more excited to compete on a state level. Her upperclassmen have experienced the high of a state championship and the younger girls share that enthusiasm to exceed, Burton said. 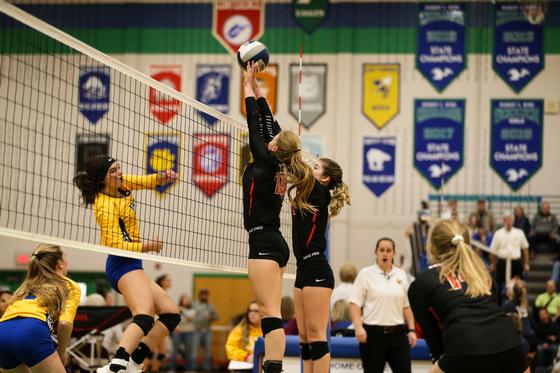 She couldn’t be prouder of her players.
“They are doing a great job at being flexible and playing in whatever spot that (Assistant Coach) Grant (Burton) and I ask,” Burton said. “They give 100 percent and we couldn’t ask for anything else.”
Jayce Lucas is doing a great job filling the setter position, left by Alicia Bertari, who is also out with injury.
“Each time she plays, she gets a little bit better and more confident,” Burton said.
Peyton Merica continues to be the team go-to and with Hefner out, she’s the defensive leader on the back, Burton said.
There has been a lot of switching up the lineup and dealing with player injury, but Burton said she feels that has contributed to the team dynamic. 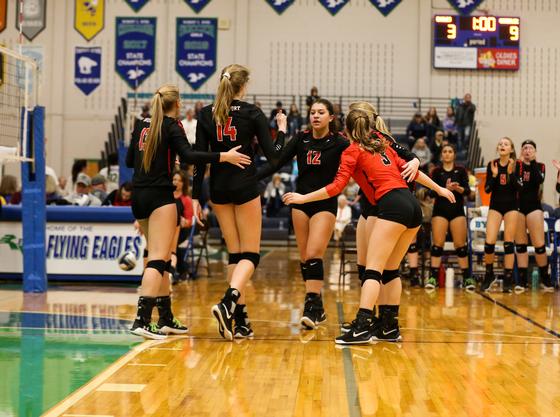 “It has even made them play more together,” Burton said. “They were doing a great job with that to begin with, but through the season they have realized just how important that is.”
Now that the pressure and stress of returning to Charleston is over, Burton said now her team just has to go and play their A-game.
“At practice, we’ve been working on and talking about having no doubt and playing together as a team,” she said. “If we do that, I think we’re going to make it pretty far.”
In addition to BHS and RCB, Philip Barbour advances to states, so three teams from the Big 10 Conference are competing.
Oak Glen enters the tournament in the first seed, followed by Shady Springs, Philip Barbour, Bridgeport, Point Pleasant, Winfield, RCB and Independence.
BHS plays Point Pleasant 8:30 a.m. Friday and a win by the Tribe would place them in a 6:30 p.m. Friday match with the winner of the Oak Glen and Independence match. The Class AA championship match will be played Saturday, following the Class A championship. The Class AAA championship starts the day with a 9:30 play time.
Hefner is undergoing intense rehab and hopes to return to the court in this weekend's matches.
Photos taken during Saturday's Region II matches at RCB are by Joey Signorelli of Ben Queen Photography. See more images HERE.