By Connect-Bridgeport Staff on January 17, 2021

FROM THE WVDNR
Gov. Jim Justice joined officials from the West Virginia Division of Natural Resources (WVDNR) and West Virginia Tourism Office on Wednesday for a virtual buck scoring event to determine if a buck harvested in Wyoming County is one of the largest typical Pope and Young-class bucks taken in North America in the last five years or among the top 25 of all time. The 12-point trophy buck was taken in November 2020 by Jody Dalton, a Princeton native and avid hunter. 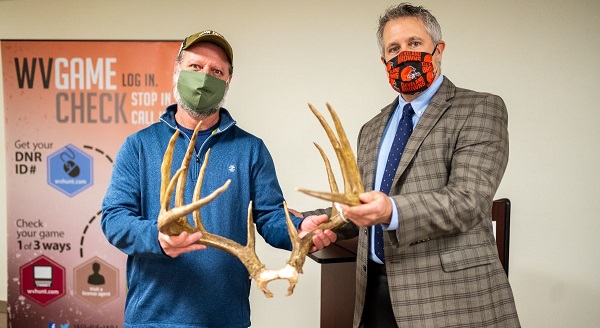 The scoring confirmed Dalton’s buck to be number nine in the top ten ranking of the biggest Pope and Young-class typical deer taken in the North America over the last 20 years, and surpassed West Virginia’s state record.
“I always say West Virginia is the best state in the nation and the outdoor opportunities found here are unbeatable. Today’s record-breaking buck scoring is proof of that.” Gov. Justice said. “I’d like to congratulate Mr. Dalton for his impressive buck harvested in West Virginia’s very own Wyoming County. It is a beauty. I’d also like to thank the DNR, which has acquired 70,000 acres of land in the last four years to give folks more room than ever before to roam the state’s hills and valleys on their hunt.”
Following the buck scoring, the winners of the 2021 Lifetime Hunting and Fishing License Giveaway were announced.

Prize winners were randomly selected from a list of 14,000 eligible applicants. To enter the contest, applicants had to be a West Virginia resident and purchase a 2021 Class X, Class XJ, Class XP, Class X3, or Class XP3 license in December.

“This contest is truly an incredible way to get West Virginians excited about hunting, fishing, and being in the outdoors,” Gov. Justice said. “Those who know me know that hunting and fishing are among my favorite pastimes, so I want to thank the DNR and Tourism Office for coming up with big ideas like this and spreading the news about all the beautiful natural resources and goodness we have in our great state.”
The lifetime license giveaway received 4,000 more applicants than last year’s contest. The WVDNR also reported that the promotion helped increase December license pre-sales by 12 percent compared to last year’s pre-sales.

“I want to thank everyone who participated in this promotion by buying a license for themselves or a family member,” WVDNR Director Stephen McDaniel said. “Congratulations to the winners. We hope this promotion and all improvements to the hunting and fishing experience in our great state inspires the next generation to take up a lifetime of enjoying the outdoors.”
Prize Winners