From the Bench: A Piece of Bridgeport High Football Tradition as Critical as Any to Program's Success

By Jeff Toquinto on November 03, 2019 from Sports Blog

Bridgeport Coach John Cole has been around the Bridgeport High School football program in a coaching or playing capacity going back to the 1980s. No one must remind him about tradition.
Playoff streak? He’s aware of it. Non-losing record streak? Yep, he knows that too. Nine state championships? He’s coached in a whole bunch of them. 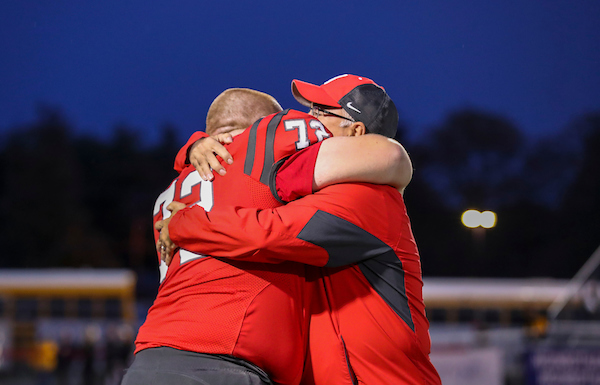 Yet Cole knows there’s a tradition that doesn’t stretch back as many of those years. It’s relatively new, and if you ask Cole, he’ll tell you it’s important as anything the Indians do on the football field.
A week from this past Friday the tradition was renewed. And the person who renewed the tradition may not be one you hear Gooch Holbert announcing too much from the public address position.
The person in question was senior lineman Jacob Isner. Isner had the honor of being named the 2019 recipient of the Talon Steadman Heart Award prior to the start of the Tribe’s game against Keyser.
Before we get into why Isner won, it’s important to know why it’s named after Talon Steadman. It’s also important now, as time passes, to let those who may not know about Talon Steadman what made a young man who never started a game for the Indians so special and why 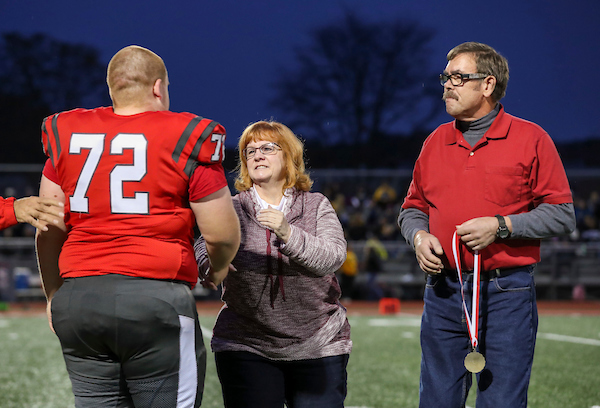 an honor – a new tradition – was started on his behalf.
Before kickoff, the entire team gathered on the sideline and the entire coaching staff headed on to the field where they were joined by Dick and Susan Steadman, Talon Steadman’s parents. The team was about to recognize a player on the team for their selflessness and team-first attitude in Isner.
Talon Steadman passed away in August of 2009. He was killed at the age of 16 in an automobile accident and was a proud member of the Bridgeport High School football team.
Steadman, Cole and past coaches have said, wasn’t the biggest kid. He wasn’t the fastest. He was, however, as determined as anyone and the player that always volunteered to help when the coaches needed something – or someone – to do something.
He was team first and never a “me kid” when on the field. Cole has said repeatedly after presenting this award each year that it’s this type of contribution that makes the program work as much as anything else. Cole said it’s as important to present the honor for what players like Isner do for the program as it is to keep Talon Steadman’s memory alive.
“We’ve done this going back to Bruce Carey and I imagine we’ll be doing it after I’m no longer here,” said Cole in the past about the award. “This honor is a big deal and it should be a big deal.” 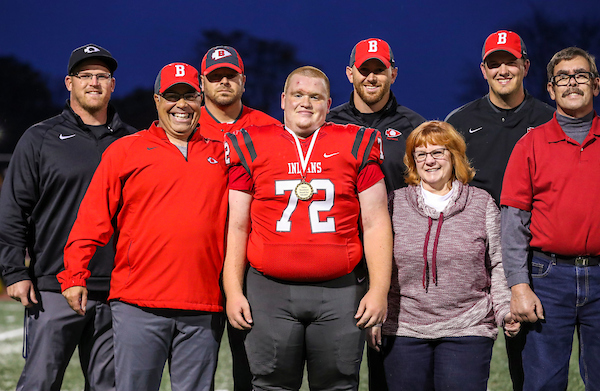 Now, back to Isner.
“Here’s a kid that’s been in our program and hasn’t started any game,” said Cole. “He is on special teams this year, but where he’s made a difference is in practice. He’s ready for practice every single day.”
For a senior, it may be a bit hard knowing you’ve got to prepare the starters for battle. Instead of pouting, Cole said Isner has made the entire line better.
“Jacob is a big kid and he plays scout team on both teams on both sides. I’m thinking, maybe, he’s missed one practice,” said Cole. “We can count on him this year, and that wasn’t the case before, and he’d tell you that.
“His sophomore and junior years he just wasn’t in shape and didn’t seem to have the heart or desire. This year, his senior year, we can’t move him practice sometimes. He makes our guards when we put him in the A-gap extremely mad,” Cole continued with a laugh. “Every week it’s like that, and because those guys can’t relax, they get better. That’s what Jacob Isner has done.”
Cole said when a volunteer is needed – even though he’s a senior – Isner is there, particularly if it’s on the line. And Cole said it doesn’t matter if it’s offense or defense.
“His goal is to make us better. You know that’s exactly the way Talon was,” said Cole. “He just loved being part of the team and you can 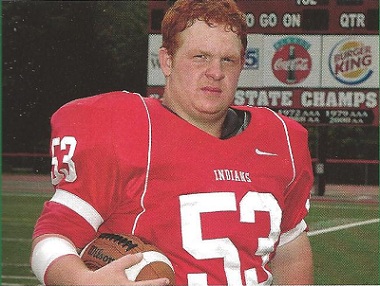 see that with Jacob. This year, he’s done extremely well.
“The other thing that’s important is he’s a good student, and always has been. Heck, I can remember their family when all Isner kids were little, and I understand I’ve been around a while, and they’re there at 5 o’clock in the stands,” Cole continued. “He’s been wanting to be part of this for a long time and he’s really become a key part of it this year.”
And that led the coaches to name Isner the Steadman winner for 2019. Not because he’s a senior who’s not complaining, but because he’s a senior who does his job and quietly become a strong part of the Indians’ football fabric.
“I can tell you this, he doesn’t get this award if he doesn’t earn it. Jacob earned it,” said Cole
Not that he doubted the selection, but Cole said when the announcement was made, he knew the staff got it correct.
“Watching the entire team on the sideline all happy that he got the award let the coaching staff know we got the right guy,” said Cole “I hope he realizes how important the honor is and how important he is to the program.”
As important as Talon Steadman was to the program. That, in and of itself, speaks volumes.
Editor's Note: Top photo shows Coach John Cole hugging Isner after being named the award winner, while the second photo shows Dick and Susan Steadman presenting Isner with the honor. In the third photo, the family joins Isner and the coaching staff. Bottom photo is a picture of Talon Steadman from his time with the Indians Top three photos by www.benqueenphotography.com.