From the Bench: A Piece of Bridgeport High Football Tradition as Critical as Any to Program's Success

For anyone really into detail, the headline on this blog is the same as the blog covering the same subject in 2019. As one might imagine, it is because the same principles apply – this is as big a reason as any Bridgeport High School wins on the football field.
The person it is about is different. Those principles, well, they will not be changing anytime soon if the coach has anything to say about it.
Coach John Cole knows all about it. It is one of those intangibles that has been in place for a long time and it only in recent years has 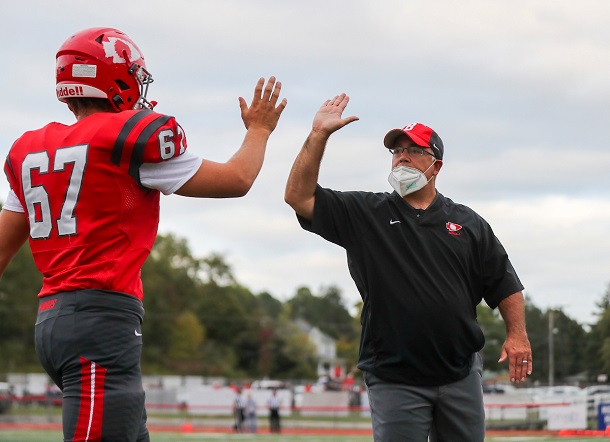 been officially recognized.
That playoff streak? Probably not still going without it. The non-losing record streak? Yeah, that one may not be around either.
Two Friday ago, on Sept. 25 prior to the Indians’ game with Robert C. Byrd, the entire Bridgeport High School football team lined up on the sidelines with members of the coaching staff. Cole was then joined just on the field by Dick and Susan Steadman.
Cole and the Steadman’s were there to present the annual Talon Steadman Heart Award. The honor does not go to the team’s best player. It does not go to the fastest or the one with the most potential.
It goes to the one that best represents the sacrifice made for the betterment of team – often in the face of anonymity on the practice fields. It reflects the style and workmanship of former Indian Talon Steadman.
Talon Steadman died in August of 2009. He was killed at the age of 16 in an automobile accident and was a proud member of the Bridgeport High School football team. 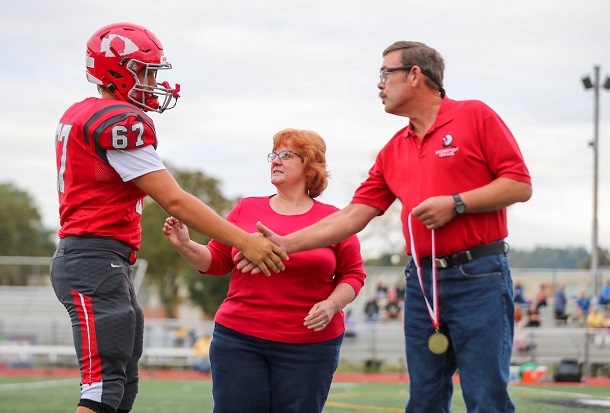 Steadman, Cole, and past coaches have said, Steadman was not the biggest kid. He was not the fastest. He was, however, as determined as anyone and the player that always volunteered to help when the coaches needed something – or someone – to do something.
He was team first and never a “me kid” when on the field. Cole has said repeatedly after presenting this award each year that it is this type of contribution that makes the program work as much as anything else. Cole said it is as important to present the honor for what players like the one honored two Fridays ago do for the program as it is to keep Talon Steadman’s memory alive.
The attitude has been around the program for more than a half a century now. The only sad part is Steadman’s passing put a name and an award on it.
Still, there was happiness Friday when Gooch Holbert announced the winner over the public address system. The name was one Cole and the rest of the staff were thrilled to announce – senior Matthew Poling. 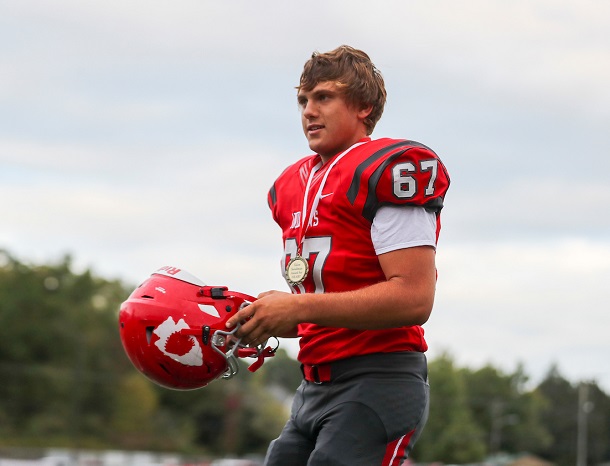 “He’s played all three years for us and now, as a senior, he’s not starting. He could mope and drop his head, but he does not do that,” said Cole. “He just stays with it and was like that in our abbreviated offseason. He was consistent in everything and back in June or July he was going full speed more than he did in the previous two years. The coaches all noticed it. We appreciate it.”
Cole was visibly excited when Poling’s name was mentioned. The rest of the team was excited as well with smiles and long and loud applause from his peers. Even better, Poling sees action – and he could see even more before the year is done.
“He’s our backup center, which is extremely important in our system. He not only had to be physically ready, but he had to learn all the new stuff with the offense we have put in because he could be called upon at any time,” said Cole.
Last year, it happened in the Fairmont Senior game when current starter Peyton Henderson was knocked out of the contest. Poling came in and had to block arguably the best player in the state in lineman Zach Frazier.
“They saw a reserve and put their best player on him. It didn’t go too well, but Frazier was just a man out there,” said Cole. “He handled it as best he could and, to be honest, he would line up no matter what the situation was or who was out there.”
That, said Cole, is what separates a player like Poling from the Pack. It is what keeps Bridgeport winning along with all the all-state 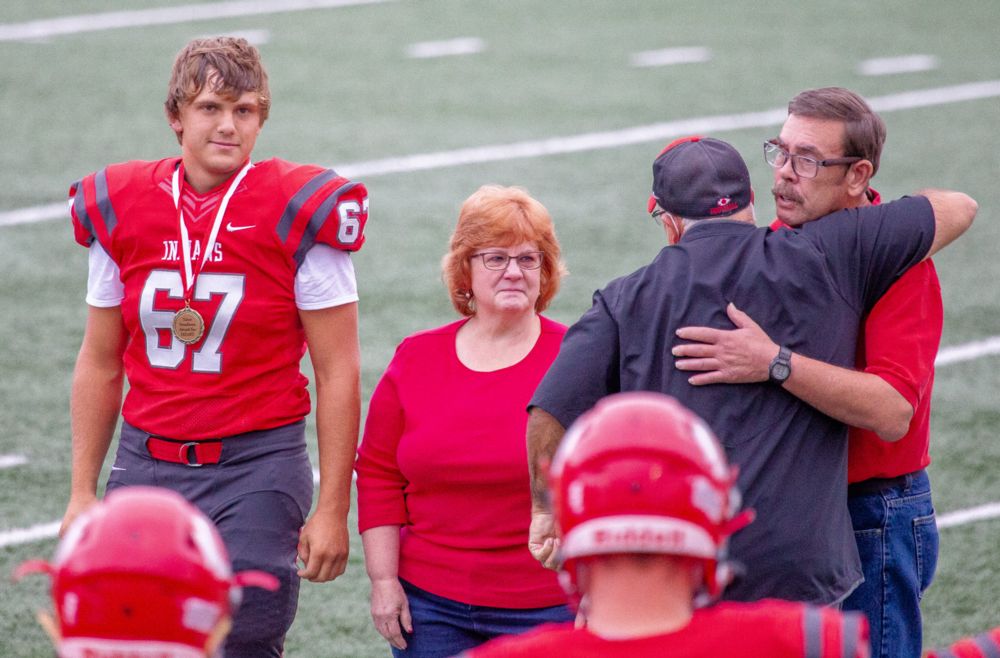 players and headline grabbers.
“The criteria to get this honor, and believe me it is an honor, is to be the guy who addresses things we need. We need someone on the scout offense or defense, he’s there with a good attitude,” said Cole. “He really wants the team to be successful, and he does his part to make that happen.”
Cole said a big part has to do with something else. He said Poling is a good young man on and off the field and that stems from something else that is important.
“He’s just a good kid who comes from a good family. That’s important. That type of upbringing creates good teammates, which he certainly is,” said Cole. “Some kids, and even the parents, have a hard time when a kid is a senior and worked hard and isn’t where they want to be in the starting lineup and don’t deal with it. You have to deal with it or not deal with it.
“The thing with Matt is he deals with it and it’s a credit to him and his family,” Cole said. “You saw the team. You saw how excited they were for him. It’s because they know his value. They know what he does.”
And, as alluded to above, Cole knows what Poling does not do.
“He is a senior and if the young kids saw a senior complaining, making issues, that creates a problem somewhere; maybe not immediately, but it can create a problem that lingers in your system,” Cole said. “Matt doesn’t do that. He sets an example and the rest follow.
“You may not see his name in the stats at the end of the game,” said Cole, who pointed out Poling sees plenty of time on special teams. “You will see the appreciate from the coaches and the rest of the team for his role in the overall success. What he provides is invaluable and this honor is a testament to that.”
Editor's Note: Top photo shows Matthew Poling getting a high five from Coach John Cole, while the second photo shows Poling shaking hands with Dick Steadman as his wife Susan looks on. In the third photo, Poling is shown walking away after receiving his honor. Top three photos by Ben Queen Photography. Bottom photo shows Cole hugging Dick Steadman during the ceremony. Cole coached their son Talon during the Bruce Carey era of BHS football. Photo courtesy of Karey Kirkpatrick.