From the Bench: After 11 Years of Dominant Defenses for BHS, Assistant Coach Adam King Steps Down

By Jeff Toquinto on February 14, 2021 from Sports Blog

To say Adam King’s run with the Bridgeport High School football program has been pretty good would be a bit of an understatement. To say that it was about as solid as one could hope for would be closer to accurate.
It would be hard to argue the success King has been involved with in his 11 years with the program. It is a program he joined in February 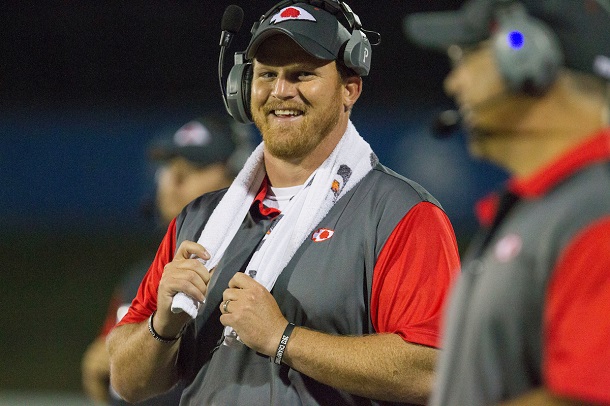 of 2010. Since that time, he has been coaching defense and also involved with special teams, but he will likely always be known for his role as defensive coordinator for a unit that smacked teams in the mouth.
During the past decade-plus, King has been a coach on teams that have won four Class AA state championships. He has been on a team that has made countless other runs to the Class AA semifinals and a few in Class AAA as well.
Now, that has all come to an end. King confirmed that his past week he has resigned from his position. There were several reasons, he said, starting first with family.
“I’ve got two kids (Brooks and Cooper with wife and former BHS alumna Casey) and they’re pretty good little athletes in their own right and they love football and baseball,” said King. “I’m going to focus on them and already I’m going through spring training with baseball right now.
“The other thing it was time. This is the third coach in 11 years, and everyone does things different. Even though I know them all, you 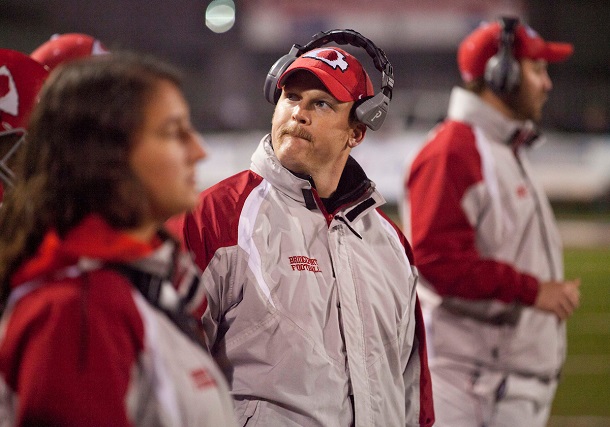 have to readjust, so it was just a good time not to go through that process again,” said King. “The other thing is time. My August through Novembers for the last three years have been 16-hour days.”
Those days see King leave his Bridgeport home at 6:30 a.m., teach, head to practice and then head to youth football practice. He returns home those days at 8:30 p.m.
“That’s rough on my lower back,” said King with a laugh.
So, it is time for a break from the action. It is likely, however, not a permanent one.
“I’m not sure about what’s next coaching wise, but in the short term the answer is no. I’m not going to close that door though. I enjoy coaching,” said King. “I enjoy the game.”
King has not only enjoyed the game and been successful as a coach, but he has also enjoyed the game and been successful as a player. He became a bit of a statewide name during his time playing for Ripley where he was a three-year starter for the Vikings and finished as 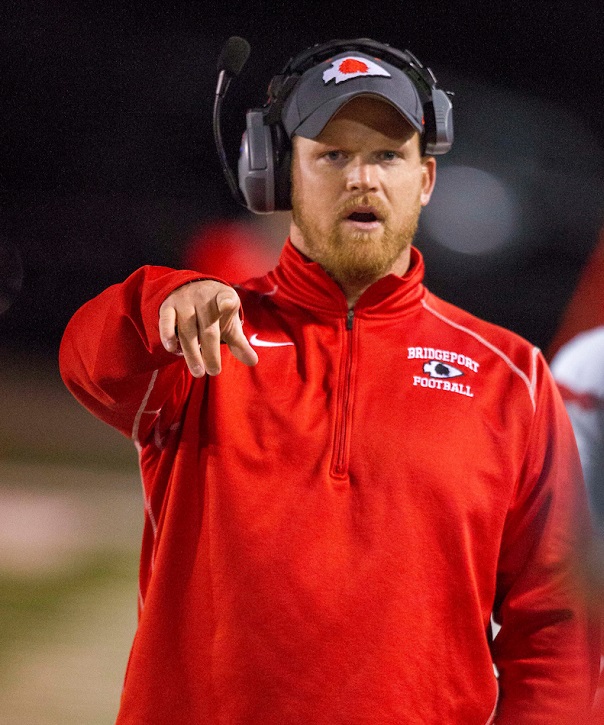 the school’s all-time leading rusher.
The effort landed him a position at West Virginia University. He not only was a two-year letter winner for the Mountaineers, but he earned the Danny Van Etten Award under legendary Coach Don Nehlen, which is given annually to the team's rookie of the year.
King and his wife Casey, a former BHS state champion cheerleader, reside in Bridgeport with their children Brooks and Cooper.
The love carried him to the sidelines as a coach. Many may not recall King’s early days on the field came as a coach with Bryan Fisher and Josh Gorrell at Robert C. Byrd. He then ended up coaching wrestling at Bridgeport High School and helped in building that program from the bottom up.
Because of that, when he arrived, he was not completely unfamiliar with the Bridgeport program. However, he said not being intimately involved was likely a benefit.
“I did know some of the teachers in the building when I got here and some of the athletes, plus we live here and my wife (a former state champion cheerleader) is a Bridgeport graduate,” said King. “I was just 28 years old and I didn’t really feel the pressure of coming to this program. I think I had the advantage of not knowing too many people and that made the transition easier.”
The transition was pretty impressive. The Indians did what they have done for decades – keep winning. And while the wins piled up, so too, did the stories. King said he could “go on for days” about how special so many of the players were and the stories he had, but he 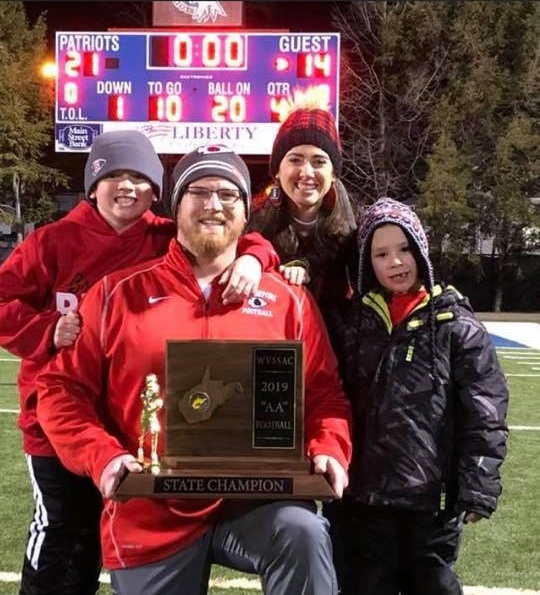 stopped with a few quick thoughts.
Those thoughts, he said, focused on why the program wins.
“The coaches will tell you it’s the kids the make this program really good. It is unbelievable to see the work ethic, the accountability, the skill, and athleticism we are blessed with; some of that comes with every player but every player comes with some of that,” said King.
King then recounted one of the things he saw that, to this day, is jaw dropping. And it involves one of the top players in Bridgeport football history – Dylan Tonkery.
“We were working in the weight room in winter, I think it was during his junior year, and we had a 36-inch plyometric box, which is a decent height for sure,” said King of the jumping exercise that is aimed at power and lengthening muscles. “Some were trying to jump on it and land on two feet. It’s not easy to do, at least until Dylan got up.”
During the future West Virginia University player’s attempt, he did not actually do it as he was supposed to. When Tonkery jumped, he did not land on the top of the 36-inch box. Instead, he went from a vertical jump, cleared the box, and landed on the other side.
“The coaches and everyone just looked at each other. He turned around and did it again,” said King. “I tell people that story. It’s a Paul Bunyan type of story … It just doesn’t happen.”
King also talked fondly about his time coaching special teams. He talked about how critical things like kicking and punting have been to the Tribe’s success. And he talked about former Division I punter at Iowa Connor Kornbrath. 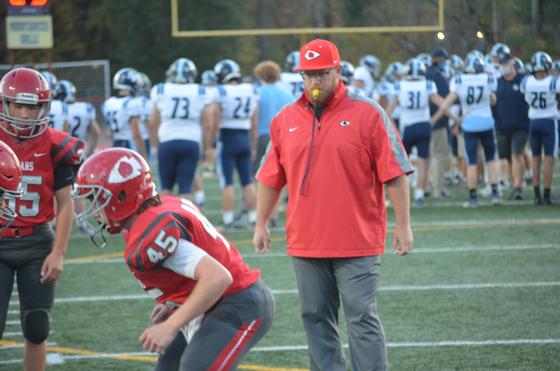 “We always had really good kickers. Some of the things Connor Kornbrath did were amazing,” said King. “Watching him in practice, he could actually kick from the 40, where we kick off from in high school, and make a field goal through the upright. I don’t think he ever did it in a game, but I know that’s a reason he went Division I.”
King says he will miss seeing those things. He will miss bringing in new ideas to the game plan or strength and conditioning. He will miss picking up parts of the game from different teams, different coaches and turn it into something unique for the defense. Most of all, Adam King will miss what he said is the most important thing about coaching – the kids.
“There were some really good times,” said King. “I still talk to all kind of kids I’ve coached in the past to this day, and plan on keeping in touch with the kids I’m leaving.”
He leaves the program in good shape. King leaves the program in a good and familiar shape – a winning one.
Editor's Note: Top three photos, including the second photo of Adam King at the 2014 state title game, show King on the BHS sidelines are were taken by Ben Queen Photography. Fourth photo, courtesy of Adam King, shows King with his family after the 2019 'AA' title win against Bluefield, while he's shown pre-game this past season working with the team.