From the Bench: After Nearly 50 Years in Business of Education, 20 Years as AD, BMS's Art Petitto Retires

By Jeff Toquinto on November 20, 2022 from Sports Blog

Back in June of 2018, I wrote about Bridgeport Middle School’s Art Petitto stepping down from the teaching ranks after 43 years. There were a few unique things about it.
First, Petitto taught those four-plus decades in the same school. He started in 1975 when BMS was Bridgeport Junior High and was located on Newton Avenue and was still there when it transitioned to middle school status and eventually found a home in the 1990s on 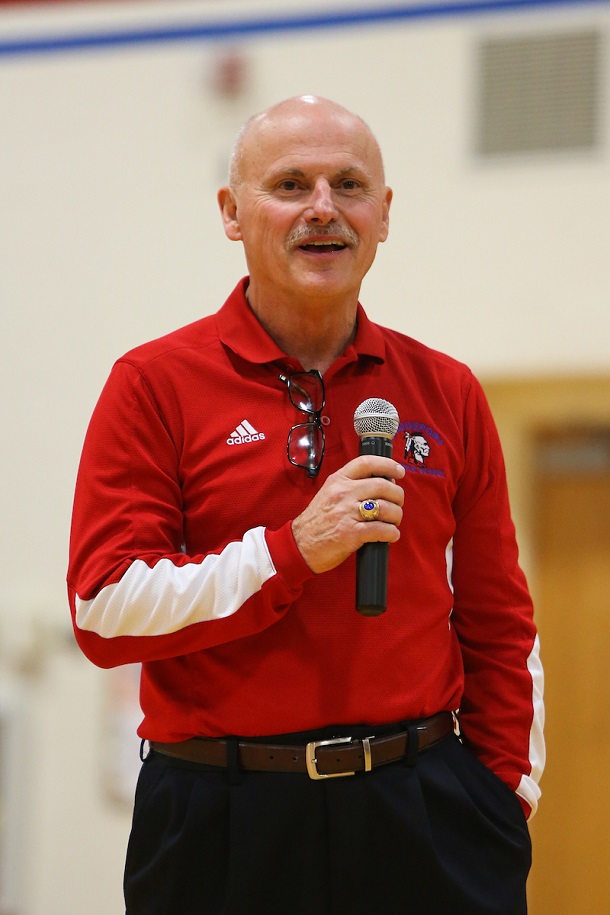 Johnson Avenue.
Forty-three years in any profession, particularly the teaching profession, is a long time – at one school is even more impressive. Yet, that was not the only unique thing.
Petitto retired from teaching aside from occasionally subbing but kept his status as athletic director at the school. It was the job he believes he started in 2002 and held for two decades.
In October, after 47 years in the education business, Petitto hung up the administrative role as athletic director. Outside of still agreeing to substitute at the school at times, Petitto is officially done.
Need proof? Getting in touch with this blog took a little time due to a November golfing excursion with some other locals to Myrtle Beach.
Golfing in November out of state by West Virginia residents is a treat often reserved for those retired. After nearly half a century in the education field, Petitto has earned the right for some sunny days in the links.
“The years weren’t the reason more so than it was just time. I have other stuff I want to do and am already doing it,” said Petitto, with perhaps a reference to the recent golf outing. “Part of it is how the entire COVID thing just slowed everything down and made me realize I need to do some other things. Honestly, I probably couldn’t give you one specific reason, but I feel it was the thing to do.”
As for the timing of October, Principal David Mazza said it was done for a reason.
“He chose that time because it was end of the fall sports and he wanted to make sure we got someone hired for winter and spring sports,” said Mazza. “That allowed us to do just that, and it allowed him to walk away from what he established. 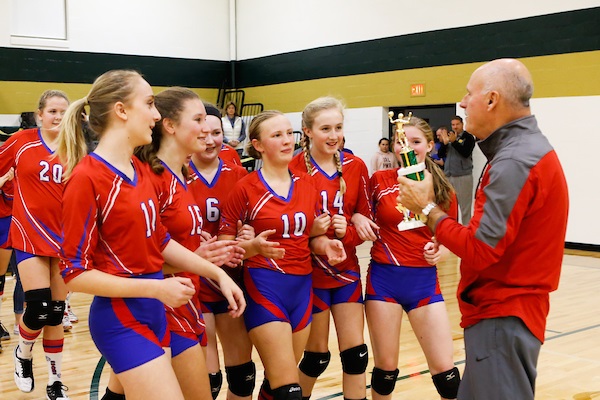 “I’m glad he’ll have more time away doing things he wants, especially with his family,” said Mazza. “Being and athletic director is extremely time consuming. I was an AD years ago and it was a grind because I had young kids. He has grandkids, so I totally relate.”
Petitto started at BMS when JoAnne Brown decided to call it quits. He was asked by former BMS Principal John Branham, one of six Petitto taught under, about taking the position over until the school could find a permanent AD.
“That was 20 years ago. I think they quit looking,” Petitto said with a laugh.
Petitto may have been a stranger to the AD position, but not a stranger to sports. He coached and then refereed for 20 years doing girls basketball in the fall and boys in the winter when the seasons were split. It was his back, not a desire to do other things, that got him away from officiating and set the stage for a multi-decade run as AD.
The bulk of his start and maturation into the role came under former Principal Carole Crawford. It ended under the guidance of current 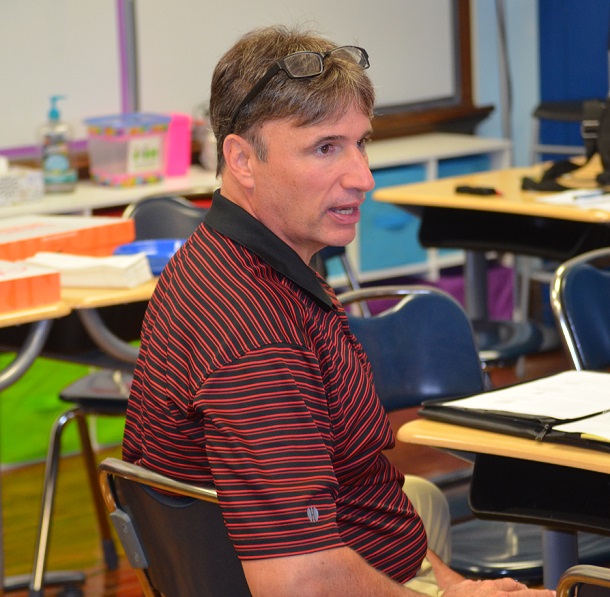 Principal Mazza.
“Carole and I learned the athletic administrative duties kind of together. Ironically, Mr. Mazza was the AD at Lumberport Middle when I started and I leaned on him a good bit,” said Petitto.
Yet it was another individual who led Petitto into the position with a passion. And it was a friend from Washington Irving High School when he started.
“Bill Brown at WI was my mentor and he had been doing it long time before me,” said Petitto. “He filled me in on getting involved with the (West Virginia Athletic Director’s Association) and so many other things that proved invaluable over the years. He was such good support.”
The support saw Petitto get involved even beyond BMS on the athletic front. And despite being retired, he will still have a hat or two on as it relates to athletics.
“I’m still going to be teaching coaching classes through the WVSSAC every couple of months and still be active with the Athletic Director’s Association,” said Petitto. “I’ll also still be involved with directing from of the WVSSAC’s tournaments, but the time commitment there is significantly less than being a full-time athletic director.”
That will allow him more time to follow his grandchildren with his wife. Those youngsters are currently a freshman at West Virginia University and a sophomore at Hurricane High School – both actively involved. 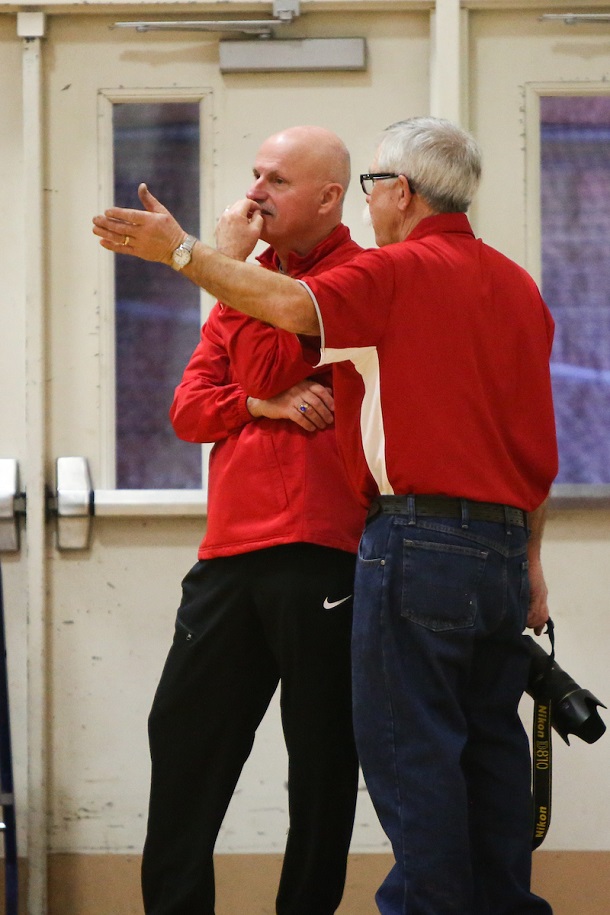 “That keeps us busy, and it’s a good busy,” said Petitto.
His time at BMS as athletic director, he said, was also a good busy. And he said he is thankful for the administration during that time.
“I had really good athletic principals, even though with John (Branham) it was a short time frame. Carole was fantastic and Dave came in for the last six years and just carried things on,” said Petitto. “I can easily say I had three principals to work under as athletic director and all were good supporters of athletics, which is what you want.”
Mazza said it was reciprocal.
“With Art you knew officials would show up, the schedules were in place, the rosters were in place, the uniforms in place and everything else,” said Mazza. “He did his job and what a relationship we had with him, the boosters and Tom Mellot heading up that area. Those folks even made sure our Bridgeport Middle School kids looked great with their uniforms. Art covered the bases.”
While Petitto said Mazza and the two other principals were as big a reason as any he stayed so long, he said there was another key reason. And he said it was the hardest reason to walk away.
“When you got kids like we have in Bridgeport, that makes things a whole lot easier most of the time,” said Petitto. “It also made it hard to leave, but now that I have, I know it was the right thing to do.”
After 20 years as AD and 47 total teaching and administrating sports to thousands of students, leaving on your own terms was the right thing to do. Enjoy the official retirement Art, you have earned it.
See you on the course.
Editor's Note: Top two photos showing Art Petito speaking and presenting a championship trophy are by Ben Queen Photography. Third photo shows BMS Principal David Mazza, while Petitto is shown below talking with BMS Super Booster Tom Mellott.