From the Bench: Bridgeport's Greg Harrison Fulfills His Childhood Dream as He Finds His Way to NBA

Last week’s blog is going to lead into this week’s blog. It is going to have the standard Bridgeport flavor with some West Coast seasoning.
During the last visit here, I told the story of Chris Cunanan who works for the Los Angeles Lakers and who became, to the best of my knowledge and the several thousand that read the blog’s knowledge, the only person in the city to ever earn an NBA title ring.
It was a pretty cool story of the local guy chasing his NBA dream and getting a piece of championship hardware. Turns out, Cunanan helped another guy realize a dream right here in Bridgeport. And as one may expect, it involves the NBA.
Recently, on March 12 to be exact, Maple Lake resident Greg Harrison followed through on something Cunanan asked him. The inquiry 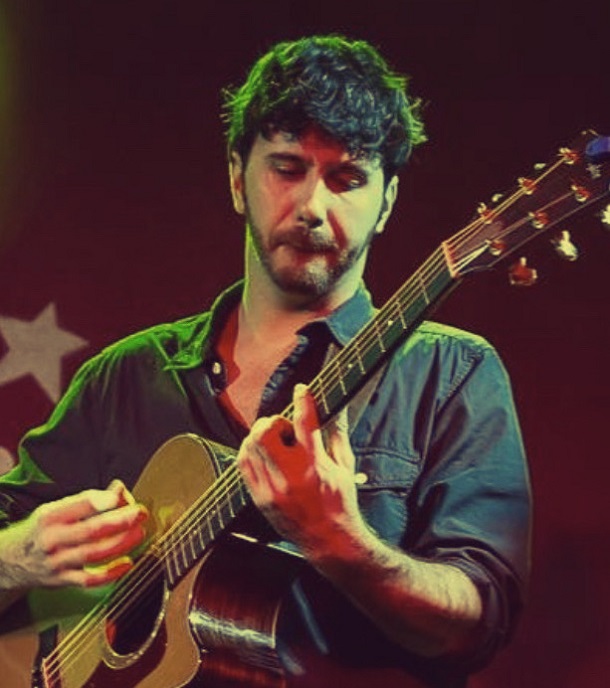 was simple – “Would you like to perform the National Anthem for a Lakers game?”
Even under these less than normal circumstances, this was a big deal. And Harrison eventually did it. But the decision was not a slam dunk, and it had nothing to do with not having a love for singing or being flattered by a suggestion from his friend.

We will get there shortly as for his hesitation. First, though, a little background.
Harrison and Cunanan are not just friends. They are lifelong friends.
“We grew up together and graduated together in the Class of 2000. We played sports like Little League and Jerry West together and started school together at Johnson Elementary,” said Harrison. “I’ve pretty much known him my entire life and then he does this for me.”
As Cunanan began chasing his dream of being involved with professional sports and, in particular, the NBA, the two did not see one another as often. In fact, it was rare to have nearly the contact they had in their formative years.
“We only see each other on holidays and we’ll occasionally talk on Facebook,” said Harrison.
It was on the social media platform of Facebook where Harrison got the message from Cunanan. The message, as noted, was a request to perform for the Lakers.
“I read it and thought, ‘did he really just ask me to do the National Anthem for the Los Angeles Lakers. I had to think about it and was immediately nervous,” said Harrison. “Then, I realized you can’t pass an opportunity up like this.” 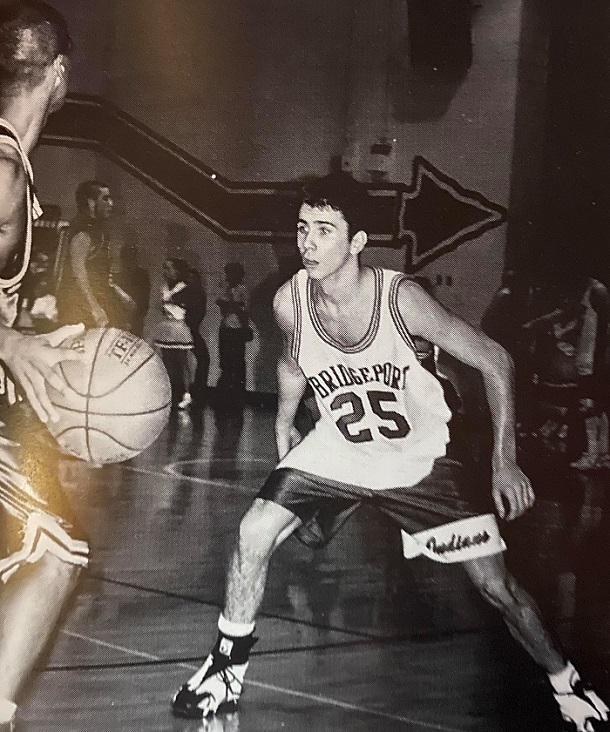 The reason for the nerves? Harrison has done many songs for many years. The National Anthem was not on the long list of songs he has performed.
“I guess I had sung it, but only under my breathe at sporting events,” said Harrison. “It’s actually a pretty challenging song to perform.”
Harrison was not nervous about a flight to the Staples Center. He was not worried about looking eye to eye with Lebron James or the possibility of a celebrity judging the performance with a state. Due to the pandemic, this performance was to be recorded and sent to Cunanan where it would be played over the video system.
“I can’t tell you how many times I recorded it the first day I started to sing it and how many times I was recording it in different keys. I almost ran out of iCloud space,” said Harrison. “The next day I turned on the camera and said to myself to do it. That’s what I did and sent it away for probably the highest profile performance, even pretty much in front of an empty audience, to date.”
The recording combined two of Harrison’s loves – music and basketball. Ironically, it was his mother that steered him toward singing early on when he was certain he would be lacing them up in the NBA>
“I’ve been singing my whole life. As a kid I sang The Jackson 5 all day and my mom eventually told me I should take guitar and piano lessons,” said Harrison. “I was five at the time and was certain I would be playing in the NBA. I guess the lesson I learned that day was you should always listen to your mother.”
That did not stop Harrison from loving basketball or singing. He grew up a fan of Michael Jordan but knows the history of the Lakers and 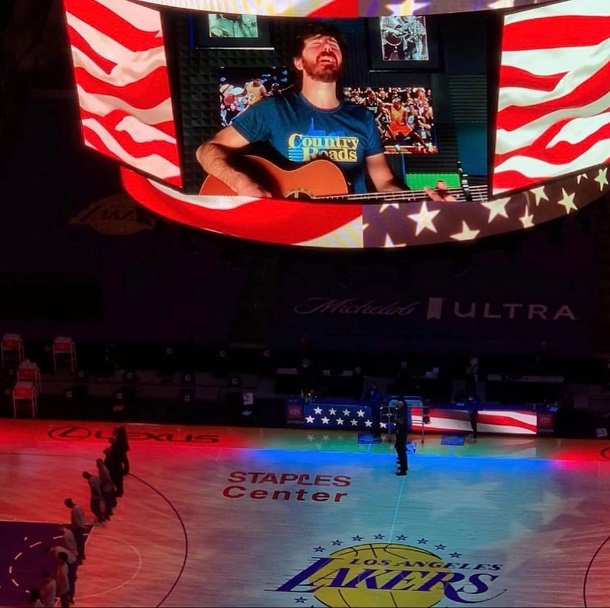 knew full well he was singing for arguably the most historic franchise in the NBA.
“It was an honor,” said Harrison. “I know well about the Lakers.”
What he did not know is how many people saw or heard it. He is not sure if those with local cable getting Los Angeles Lakers games or those with the NBA League Pass available on cable saw it. He is not sure how many people at the game that were not players got to see or hear it.
“That’s the strange thing, I know no one was in attendance from a fan standpoint but there were some people there. In a way, I may have performed for a 100,000 people or maybe a thousand or a few hundred,” said Harrison. “I did hear some cheers afterwards. I just hope it wasn’t piped in.”
Ironically, Harrison would have rather sung it at a game packed. Not because of being in front of an audience, but because of the stress.
“I would have rather walked up, grabbed the mic, and sang live. That would not have been nearly as stressful,” said Harrison. “When you’re recording you start thinking how the song stars very low and then the Rockets Red Glare come along with a high note that’s note in the same key, but an octave higher.
“When you’re recording you start thinking of all the amazing renditions I’ve seen, and I also thought of people messing up by starting too high. You have to hit that high note or you’re in trouble,” he continued. “I just decided to sing how I heard it when the WVU band played behind. No crazy twists, just sing it.”
Harrison said it was a privilege to sing for his country. He said he would do it again and hope to do it where he can see other sing along.
“You know, I thought about my neighbor at Maple Lake, Tom Clark, when I watched the video of me singing. He was a like a grandfather to me; heck he held me as a newborn,” said Harrison of Clark, who recently passed at the age of 99. “The reason I thought of him was because he sang in the Marine Corps and he would sing the Marine Corps hymn to me.
“Hopefully, he was watching,” Harrison continued. “Hopefully, I earned a salute.”
Harrison now becomes at least the second person with Bridgeport ties to sing the National Anthem at an NBA game. The other is Scott Simons, who also sang during the pandemic for a Lakers game. He also sang at the request of Cunanan. Simons sang during last year’s NBA Western Conference Finals with the Lakers playing the Rockets in the “bubble” in Orlando.
“Funny thing, I’ve always kind of idolized Scott and to see him do it was a big deal,” said Harrison. “Now I’ve had the chance thanks to Chris. He’s got such a great job; one I think we’re all a little bit jealous of that are sports fans, but one where we’re all happy for him because he’s just such a good person. I just can’t thank him enough.”
Harrison is thankful for doing the one thing he always wanted to do. He got to perform in the NBA.
Editor’s Note: Screen shot photos from the video, as well as videos of Harrison, courtesy of Greg Harrison. Also, you can watch Harrison perform live on Facebook at 8 p.m. on Thursdays.