From the Bench: Career of the "Voice of the Indians," Travis Jones, about to Reach Incredible Milestone

By Jeff Toquinto on February 16, 2020 from Sports Blog

When Travis Jones first began calling Bridgeport High School sporting events, the year was 1993. The Indians were still a force in many sports with football being the one most statewide identified with as the powerhouse.
That powerhouse combined with Jones in the press box had an inauspicious start back on Sept. 3 of 1993. Jones was in New Martinsville to call a Class AA game between perennial powers Bridgeport and Magnolia coached by the legendary Wayne Jamison and Dave Cisar, respectively. 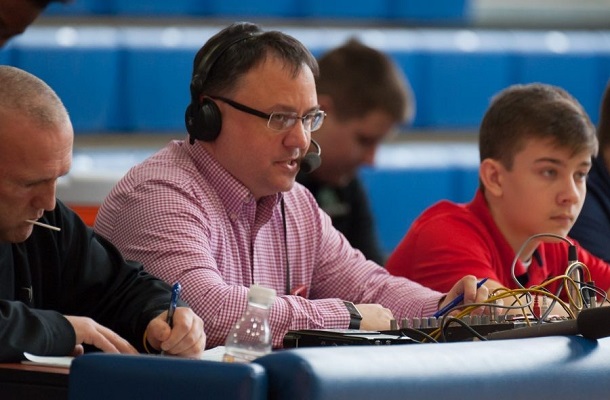 “I remember we lost the game 20-0,” said Jones. “It didn’t get much better the next week.”
Jones’ comment isn’t hyperbole. The following Friday the Tribe fell to what was then another perennial ‘AA’ power in South Harrison.
“My first two games we were 0-2. That year, in fact, was the last time Bridgeport’s football didn’t make the playoffs,” said Jones. “History shows us the year was an anomaly as the football team has made the postseason every year since and state titles in football and every other sport in between take place regularly. I guess I’ve been fortunate to be calling football and boys basketball and being able to talk about the sports program in general in what’s truly a golden era of sports at Bridgeport.”
Jones’ start was more than 25 years ago. In fact, it was almost 1,000 called games ago, which leads to the point. 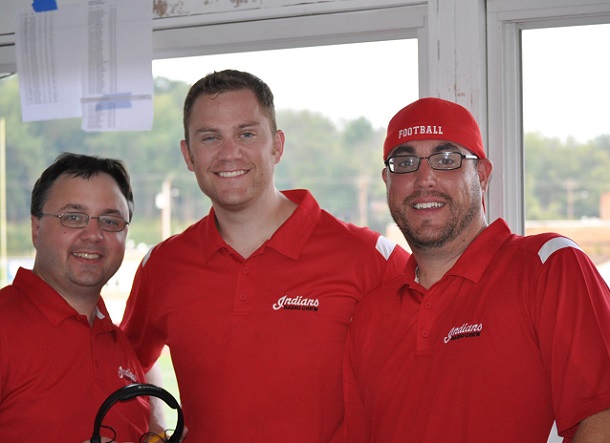 Barring something with the weather or of an unforeseen nature, Travis Jones will reach a serious milestone a week from today. Jones will be calling his 1,000th game for the Indians when Bridgeport battles long-time rival Robert C. Byrd Feb.  21 at the RCB gymnasium in Clarksburg.
“You look back and it’s happened so fast, particularly considering I still look forward to this even though between Bridgeport games and other commitments I’m pretty much non-stop from August through March, it’s not old,” said Jones who does Fairmont State games, Mountain East games of the weeks, coach’s shows and too many other things to mention.
That doesn’t mean he is unaware of the time passing. He’s keenly away – and his body lets him know it.
“When March comes and there’s those months of time where it’s not as hectic, I really look forward to that now. I enjoy the games and the work, but I am ready for the time away now as compared to the past,” said Jones.
Having a past was far from a certainty. Having a past where Jones eventually became “The Voice of the Indians” and as big a part of the 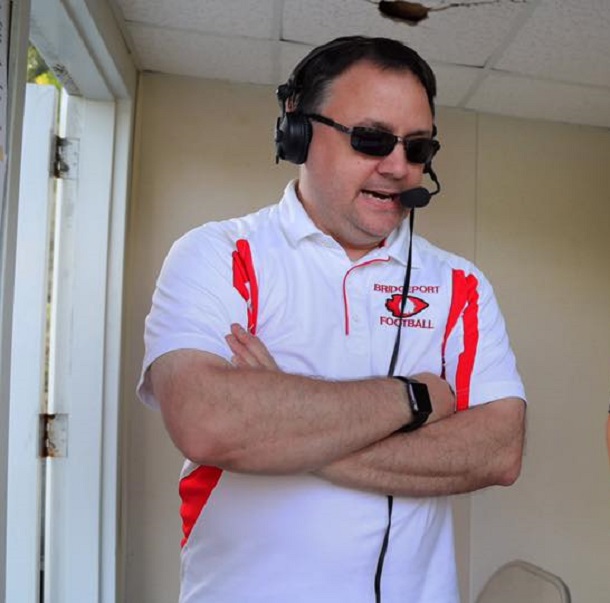 program as anything else also was far from a certainty.
Many things had to fall into place for Jones to have what’s happened to take place. Prior to that first game in 1993, Jones’ company – West Virginia Radio – didn’t own the rights to Bridgeport football. Jones, a Parkersburg Catholic graduate working in Morgantown, had no ties to BHS football or any sports program at that time.
“I actually was called before the 1992 season about doing games on the radio for Bridgeport, but I couldn’t do it working for another company,” Jones said. “It just wasn’t a prudent thing to do.”
That issue took care of itself in 1993 when Jones left Morgantown to come to work in downtown Clarksburg at WKKW’s offices on Second Street. He served, at the ripe age of 22, as the program director after working for WVAQ.
At the time of the move, the rights to BHS football were given up by the group that approached Jones and West Virginia Radio got them. They’ve had them, along with Jones calling the contest, ever since.

“I had no ties at all to the community and lived in Fairmont for the first years I was on the air. I didn’t move to Harrison County until 1997,” said Jones.
Jones, of course, knew about Wayne Jamison and the Indians not being far removed from high school. If you followed prep sports in the state, you knew about the Indians and you knew Jamison. 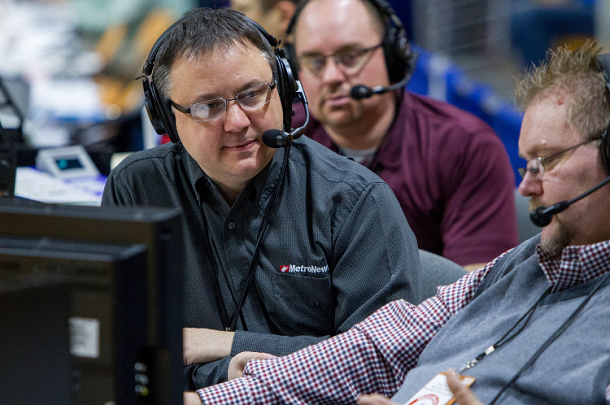 “I graduated in 1990 and Bridgeport won a state title in 1988 so I was very much aware,” said Jones.
Jones, again just 22, was soon going to be the radio outlet for the football program. He said he went the first three years before Jamison retired without getting to know the legendary coach. For pre-game shows, it was long-time former Assistant Coach Richard Iaquinta that did the duties. There was little interaction – no interaction – between the radio crew of Jones and Jim Dodrill and Jamison.
“It was hard to get to know him as a 22-year-old. Add to that I wasn’t that good at what I was doing and he probably in that era, where you didn’t archive things on the radio, never even heard what we were doing in the booth,” said Jones. “Eventually, things would change to a really strong relationship after he left coaching.”
Before that, Jones said he had to learn the ropes and the community. Dodrill helped about there, said Jones, as a newer member of the community and something else.
“Jim suggested I needed glasses because I kept misidentifying numbers. I come to find out that I couldn’t see,” said Jones with a laugh. “That recommendation alone made me better, but he was a huge help. I learned early the main thing was giving the time, give the score and where the ball is at and then try to help people visualize what’s going on. The other thing I did was not try to be too fancy.”
Jones said he eventually got his rhythm. He said a couple of things let him know it.
“Athletes will tell you that even though things are fast the game will slow down when you understand it. It’s true in the booth because things began slowing down and I could observe things I didn’t see before and that helped me improve my craft,” said Jones. “More important, it allowed me to become more accurate. I could tell there was improvement and we had a good thing.”
There was something else that also allowed Jones to know they were getting it right. Jamison, who he didn’t say nary a word to in three 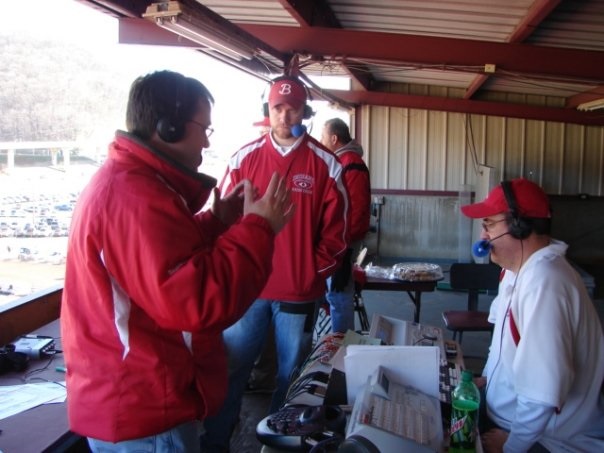 years where he called Jamison’s game, made it a point to stop into the radio booth and say hello when he attended games on a regular basis at the field that would eventually bear his name.
“Honestly, it was a great feeling because it was a sense of acceptance from the person most recognized with the program,” said Jones. “I appreciated it, and appreciated it more when he would let us know what he liked and didn’t like. I think, particularly as he got older and didn’t come as much and didn’t go on the road trips, he listened and felt we were doing a good job representing the program he built.”
Since then, Jones has called regular season football games where the Tribe has won five state championships. He’s called regular season games where the Indians have also won a boys’ basketball title.
“With football, thanks to my relationship with MetroNews, I’ve called two state title games (the 2000 win vs. Wayne and 2001 loss vs. Poca) on the sidelines and have been in the booth either on television or the radio, for the next four titles,” said Jones. “It’s nice to be able to do that.”
All those years, however, produced some memories. Jones recalls some of those that stick in his mind the most.
“With football, it’s a bittersweet moment doing (former Coach) Bruce (Carey’s) last game. We had an indication that if the team lost (Class AAA semifinal against South Charleston) that it may be his last game,” said Jones. “The game itself was tough because it was such a hard and disappointing loss.”
Then, it happened.
“I got a text from down below, from Chris Cleghorn working for us on the field, that Bruce had told the team he was stepping away. We shared it before we left the air,” said Jones. “It was a memorable moment, but certainly not a joyous one.”
A regular season basketball moment stood out for Jones as a highlight and a postseason one as a lowlight.
“I remember Nick Carbacio hitting that half-court shot to beat RCB in a great back and forth game,” said Jones. “An unfortunate memory was the undefeated ‘AAA’ team losing to Buckhannon-Upshur in the sectional in an upset. That was really hard to call.”
Yet through it all, it’s the relationships he’s built with those in the booth, the players and the coaches that are the best, Jones said. He’s enjoyed the time with the coaches.
“I relish the opportunity to having to get to know and love (late boys basketball Coach) Gene Randolph because he was pure joy. That continued with Mike Robey and it’s the same already with Coach (Dave) Marshall,” said Jones. “I’ve also had the same relationships with all the football coaches, and that makes it special.”
It also makes it easy for Jones to say it’s not ending anytime soon. He said he’s content living in Bridgeport and, even though he calls games for ESPN and Sirius occasionally, he has no aspirations of moving up in the ranks.
“I don’t know if I’ll be doing a thousand more games, but I’m settled here and still will be around for a while,” said Jones. “The one thing I’m looking forward to is my 30th year. Not only is it a milestone, but my son Cameron will be a senior on the football team that year. I guess after that the next milestone is 50 years, so I don’t think you’ll see that, but who knows. I’m still pretty spry.”
Editor's Note: Top photo shows Travis Jones, middle, courtside along with his son Cameron to the right, while he's shown with one of his long-time crews for football with Ryan Nicewarner, middle and Tim Brady in the second photo. The same group is shown in the bottom photo. In the third and fourth photos Jones is show at a BHS football game and calling basketball at the state tournament for MetroNews, respectively.