From the Bench: Former BHS Football Standout, New Father Returns to Round Out Indian Coaching Staff

In the end, it was never about being unhappy. After all, he loved what he was doing, where he was doing it, and who he was doing it with.
Rather, it is the one thing that pulls many of us in a direction we are usually pointed to even if we are not looking in that direction until a certain time. And that place is home.
Recently, Bridgeport High School alum Justin Carey returned home. The 2010 graduate and 2009 Indian football standout left his job 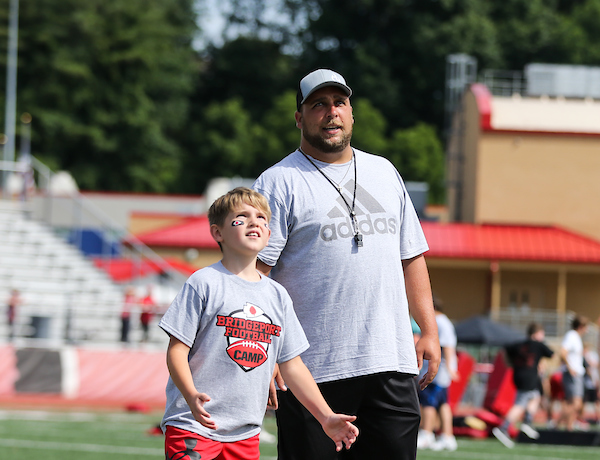 coaching at Liberty High School to become the latest – and final – paid member of the Bridgeport High School varsity football coaching staff.
For the last six years (five paid and one as a volunteer), Carey coached at Liberty High School handling line duties. He is leaving that program and his former boss A.J. Harman.
“I do want to state that A.J. does a fantastic job and he and the team over the years could not have been better to work with. It was tough to leave, but the biggest thing was that pull to come back home and coach at the place you played and give back to a program that gave to you,” said Carey. “Graduating and playing there, there’s already a nostalgic feeling being back. I know what it’s like to work hard to teach and preach the Bridgeport tradition and values because I was part of that. Now, I plan to work as hard as a coach as a I did as a player to give back.”
New head Coach Tyler Phares, who was glad to add Carey on his coaching background, knows the benefits of bringing in one of the program’s own back to the fold. 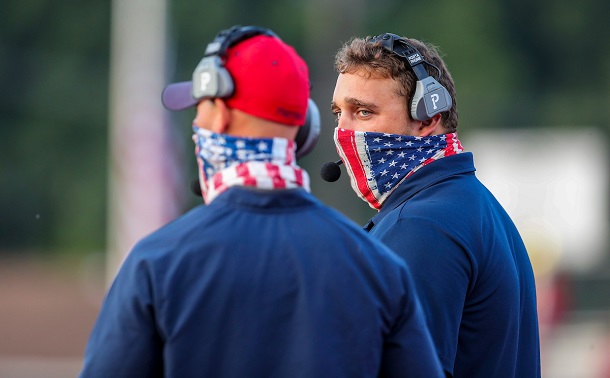 “It’s great because a guy like Justin understands the tradition. He understands the expectations and the community’s appreciation of the tradition,” said Phares. “He comes in already knowing that, and that’s a benefit.”
While coaching with the Mountaineers, Carey focused on duties along the offensive and defensive lines. With the Indians, he will be expanding his horizons coaching the tight ends, linebackers and blocking backs.
“I’m coaching a couple of new positions in linebackers and tight ends and working with the tight ends lets me work with Coach (John) Cole on the line a bit,” said Carey, who graduated from Fairmont State with an education degree focusing on special and physical education and teaches at Mountaineer Middle School. “I know linebacker is a little bit out of my element, but no one on the staff will let you fail, and, at the same 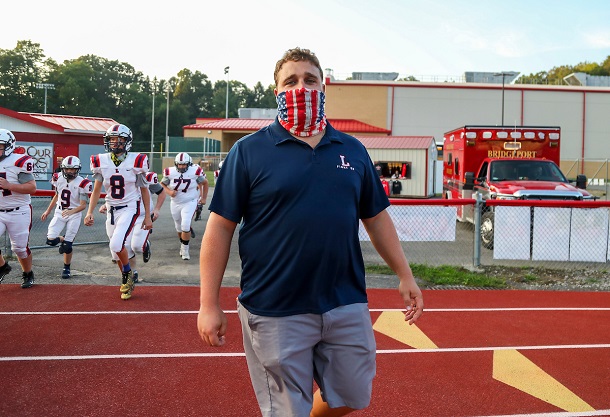 time, it’s helps me grow as a coach and figure out even more about the sport of football.”
While Carey admits to being a bit low key and an observer, Phares said that should not be confused for passivity. In fact, he said he has liked what he has seen so far with Carey’s interaction.
“What I’ve really liked is that he’ll sit back and listen to the coaches that have been here and then jump up in interject info he’s learned and knowledge he has. That’s beneficial to everyone,” said Phares. “Plus, in the limited amount of time you can see he will absolutely coach these kids up.”
Carey also admits his time has been relatively limited being back around the program. He said that led to one of the most refreshing parts of the job.
“I’m kind of low key and the first week I was here it was just weightlifting, and I hadn’t worked much with the kids. I was basically observing,” he said. “During that time, a dozen or more of the kids just came up and introduced themselves, and that apprehension you 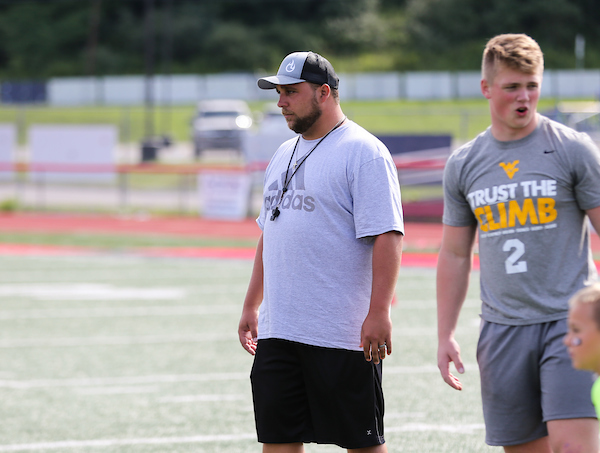 always feel making any kind of move eased up because it felt like being right back at home.”
Home is where he is back at on the football field. Carey is also back in the city he calls home, and he has gone from a young married man to a young married man with a family.
Justin Carey and his wife, the former Brittany Abruzzino (BHS Class of 2011), are the parents to Cooper. Cooper is two months old.
“It just feels right,” said Carey. “It was tough to leave where I was, but I’m glad to be back with everything going on in my life. It feels like the right direction.”
The direction for Carey is home. That always feels right.
Editor's Note: Top and bottom photo show Justin Carey at last weekend's Bridgeport Football Camp, while the second and third photos show him as an assistant last year with Liberty. All photos by Ben Queen Photography.