The pain was immediate.
It was intense pain. Pain that led Austin Mann to know something was wrong.
What was not immediate, but came shortly thereafter, was what could be lost. The 17-year-old had pretty much been preparing his entire life for his senior season of high school baseball, and now he feared it may be in jeopardy.
It all happened on a Sunday afternoon in an American Legion game. For Mann, being on the field was nothing new and what was taking place in front of him was rudimentary. 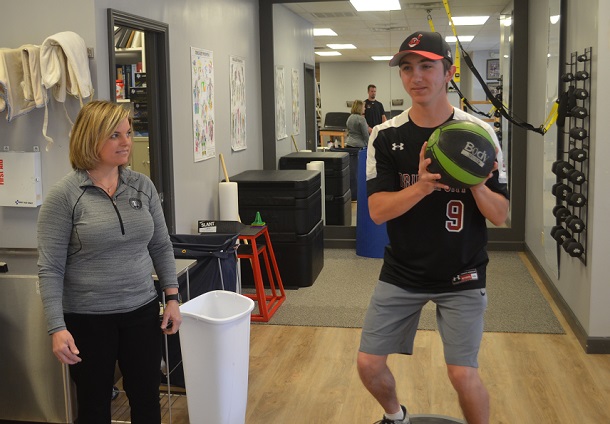 “I hit the ball between third and short and I felt like it might be a close play and then I saw the first baseman stretch out, so I went all out and stretched out to tag the bag,” said Mann. “I’ve done that hundreds of times.”
The good news? Mann was safe. The bad news? He did not know right away, but there was plenty on the way.
As soon as his foot hit the bag, he felt a pop. The pain was fast enough and strong enough that Mann quickly found himself on the ground.
“The pain was all through my leg,” said Mann. “… The pop was scary because you don’t know what caused it. As soon as it happened, I knew something was wrong because I had never felt anything like that before. It was instant pain, especially on the right side of my knee (on his right leg) where it happened. I had to hold it in a certain position, or I was in pain.”
A brief time later, Mann was being worked on by EMTs as an ambulance was called in. Shortly after that, his mother Josalyn – who happens to be a doctor – arrived. It would not be long before Josalyn had an idea what was going on and only a while after that he was diagnosed (following an MRI and further examination) by Orthopedic Surgery Specialist Dr. Joseph Fazalare.
Mann had suffered what is described as a posterolateral injury to his right knee – a fracture to the proximal fibula and a tear to his LCL, or 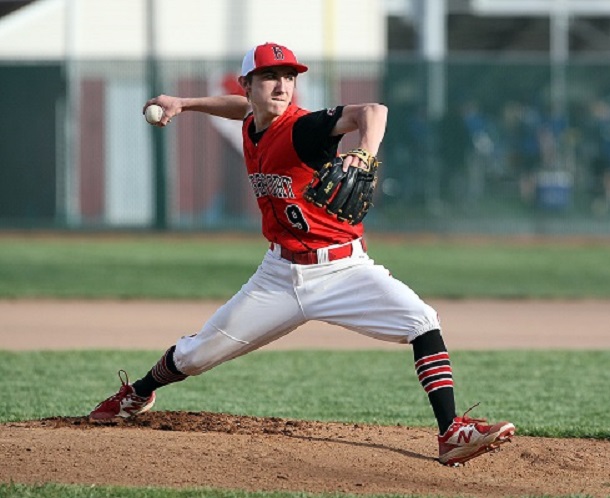 lateral collateral ligament. His lead Physical Therapist at Bridgeport Physical Therapy, where Mann would soon find himself spending his summer, fall and winter months, Kim Nolte called it “an unusual knee injury.”
Long before the diagnosis, while lying on the ground and riding in an ambulance to United Hospital Center, Mann kept thinking the same dreadful thought.
“I thought my last year playing baseball in Bridgeport was in jeopardy. The only thing quicker than the pain was I almost immediately was thinking I’m going to miss my senior year,” he said. “That was one of the scariest parts of the entire situation. I really thought about the whole time in the ambulance.
“Somewhere along the way I changed my thoughts,” he continued. “I remember thinking I’m going to do whatever I can to get back out there.”
There were two options – neither of which guaranteed he would be ready for baseball season when practice began in March, which was nearly seven months away. He could have surgery, or after being advised by Fazalare, there was a way to avoid surgery, but as Nolte said, that would “be a long process.” Still, those involved believed it was the best option to stay away from the knife.
“It would not have been a traditional surgery. When you get into surgery, the outcome for something of this nature is unknown when you’re dealing with sports and the trauma that can be associated with it,” said Spatafore. “Going this route was a difficult one, but the right one.”
The problem was that even going 100 percent with rehabilitation and following everything Fazalare and his therapy team told him at 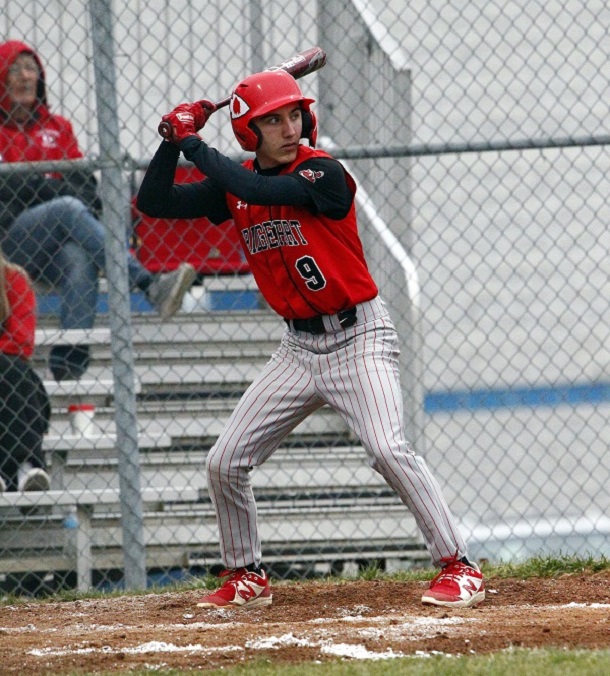 Bridgeport Physical Therapy, he could backslide and need surgery. Without a full commitment, it was almost certain a backslide would take place.
The process was brutal, but not only did Mann have the dedicated staff at Bridgeport Physical Therapy with him but had Nolte leading the charge. Not only does owner/operator Jack Spatafore speak highly of Nolte, but he knew she was perfect for more than just her skill.
Nolte’s family and the Mann family are close through their kids playing baseball together. Austin and Kim’s son Brody have been playing together since before they were double digits in age.
Even with that bit of comfort in the equation, things began as they would for anyone – less than good. Mann began by wearing a straight leg brace around the clock as his leg could not bear weight. The knee, during that time, only bent 20 degrees.
“I was committed from the get-go. I wanted to get back on the field. Every night I thought how much it stunk to be in the immobilizer, stretched out, and unable to do anything,” Mann, whose father Aaron won a state title decades ago under Robert Shields, while his mother was a state champion cheerleader. said. “I needed to get to walk with balance and then I needed to walk without crutches. It was a process to get back on the field.”
Nolte, Physical Therapy Assistant Grant Burton, and Physical Therapy Tech Nathanial Jones worked with him for months. During that period, Mann got the news he wanted from x-rays – the fracture was healing. The proper healing meant he could bend his knee more, put 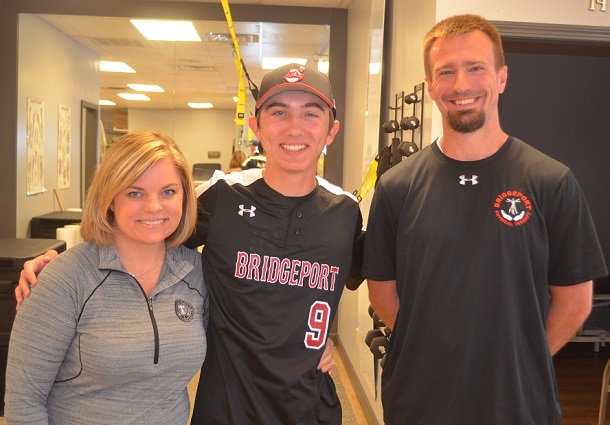 more weight on his leg, ditch the crutches and go from early rehab to full throttle recovery. Most importantly, he avoided surgery.
“He had to be compliant or else he would not have made the progress that he did,” said Nolte. “Once he was given the okay to really starting working, he did that every single day.”
Nolte said there was pressure knowing if he were pushed too hard, he could have backslid and the timeline to return would not have been met. Knowing him since he was a youth and knowing how important it was to her son’s friend also added to the situation.
Even with all that, everyone moved ahead.
The rehab process began in September. By mid-February he went to the Citynet Center and began to throw again. He started on a flat mound, trying to push off of his injured leg and get a feel for where he was. Mann did that, pushed off his left leg, stretched, and did what he could to get comfortable.
“I finally got comfortable with it and kept progressing to where I pitched on a regular mound and pushed off the rubber. I was able to test 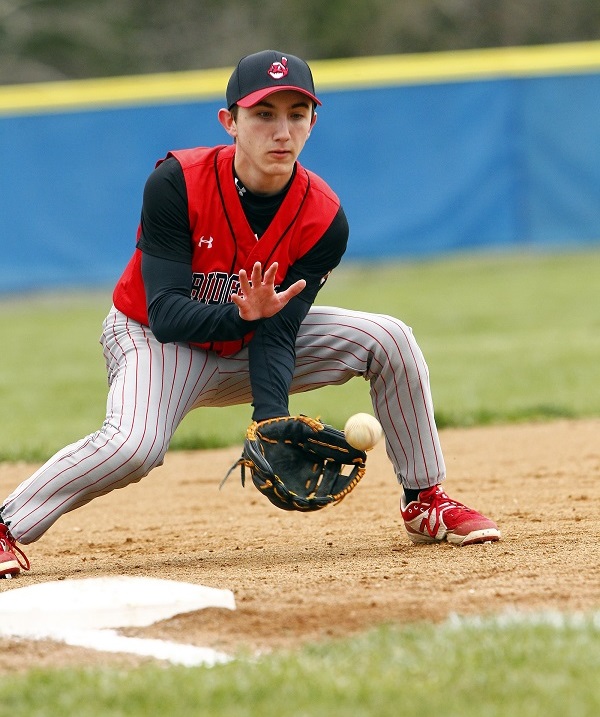 the limits of my leg,” he said. “From there, it just kept getting better and I was where I needed to be when the season started.”
With the regular season at an end, the Indians are where they need to be. And thanks in part to Mann.
Through Monday of this past week, he was 4-2 with a 1.16 ERA in 31 innings pitched with 29 strikeouts, seven walks, nine runs allowed with only four earned. He added a win to his record Wednesday against Philip Barbour to stand at 5-2.
He has those pitching numbers a year after earning Class AAA all-state honorable mention status with a 6-0 record with 0.72 ERA and 39 strikeouts. He has been just as impressive, even with the two setbacks, as he has faced a more daunting set of foes as he is among the aces for the Tribe pitching staff.
Also, as of the end of Monday, he was .250 at the plate with seven hits that included a pair of doubles and six RBIs. He had crossed the plate eight times as well.
Mann hopes there are as many games left as possible – and that would mean another trip to Charleston and the state championship game.
“In a lot of ways, I feel like I’ve come back stronger. It was a blessing as well as a bad situation. Now, I can’t wait to help my team. This is what I’ve put all of my time toward and now the goal is to keep winning and pick up every postseason victory,” said Mann. “This is where it matters.”
It matters because Austin Mann was willing to work hard. It has done more than just be a fantastic baseball player. It has helped him be a healthy one as well.
Editor's Note: Top photo shows Austin Mann working on one of the many drills he did during his rehab process as Physical Therapist Kim Nolte watches. Next two photos, as well as the bottom photo, show Mann in action this year for the Tribe. In the fourth photo, Mann, in the middle is shown with Nolte and PT Assistant Grant Burton who both played a key part in getting him back on the baseball field. 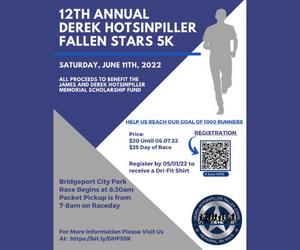