From the Bench: Greatest Sporting Event in History of City to Begin Next Weekend and it's Not Debatable

When Mike and Kim Martin put into motion the first season of the Bridgeport Little League Division of Challenger Baseball 17 years ago they likely had no idea what was going to transpire. Nearly two decades later, there are a few things that are for certain.
First, the Martins have created an outlet for children with physical and mental needs that is both rewarding to those participating and equally rewarding for those watching. 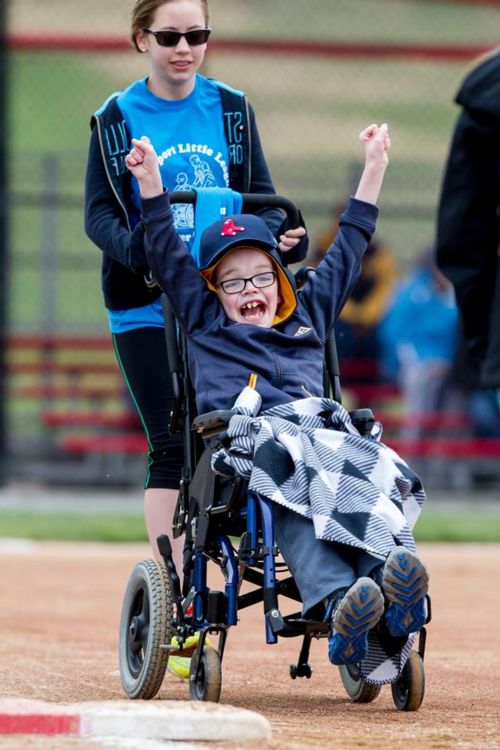 Second, the creation of the league has created what is without a doubt the greatest single sports league and contests in the City of Bridgeport each year. It’s not even close. And for those who would fancy a debate on the matter, go attend one Challenger League game and let me know if you still want to have the argument.
For those that have been or those curious about what the fuss is about, clear your calendar for April 27 at 1 p.m. On that day, it’s opening day for season 17 of the Challenger League at the Bridgeport Recreation Complex.
If you’ve ever trusted me on anything written in this column, you should be there. The event will do your heart and your soul good.
“It’s really incredible to think of where we are right now with this,” said Mike Martin who works diligently with his wife on every facet of the league. “We’ve got 92 players signed up right now. On top of that, we have about 100 buddies and coaches helping those kids in any manner they need. It’s just amazing to see this.”
While opening day is next Saturday, practice begins Thursday. Here’s the thing – those practicing and those who will play are not just from Bridgeport or Harrison County. They come from all over and no one is turned away for any reason.
“We have kids coming from Parsons, New Martinsville, Braxton County and all over because a lot of times kids with special needs don’t have opportunities and this is an opportunity,” said Martin. “The thing I’m really proud of is that we now have other opportunities in Harrison County.”
Martin pointed to his late friend Jeff Wetzel who was a huge advocate for Challenger League and a long-time umpire. Wetzel, he said, was instrumental in working with the Harrison County Parks and Recreation to create a Challenger League for basketball.
“Jeff got that started because he loved these kids. Now, you have Challenger soccer here and it’s just wonderful,” said Martin. “These kids want to be kids and I know that because when we’re not playing, and I see one of our players out, heck it may be October, they’ll ask 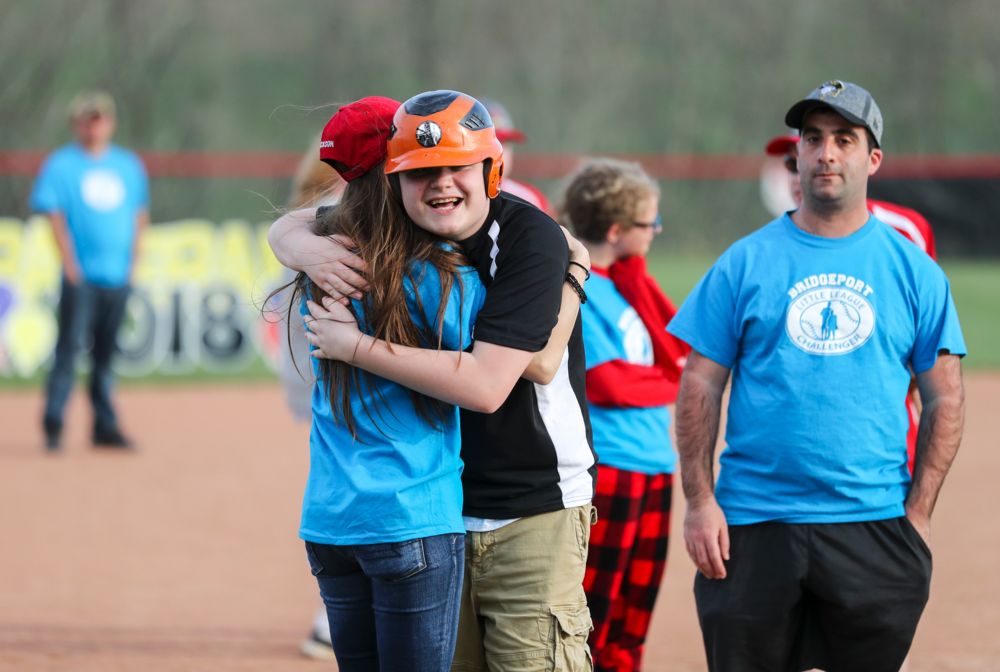 when baseball is starting.”
Those kids asking deal with any type of physical or mental issue. Martin said they have vision impaired participants that include individuals completely blind, autistic athletes and those with cerebral palsy, spina bifida, chromosomal disorders and various other conditions.
It doesn’t matter what they have, said Martin. If they get to the field, they get to play. And if they can’t get to the field or don’t have equipment, that’s taken care of too.
“There is no registration fee for family or players. What we do is funded 100 percent on sponsorships, businesses donating and very generous individuals in the community who make sure anyone that wants to play gets to play,” said Martin. “Every year those contributing come back and every year someone new contributes in ways that make you know this is a good thing.”
Most recently, Martin learned of 10-year-old Audrey Kerr. Kerr, a Bridgeport resident, opted to turn down gifts for her recent birthday party i 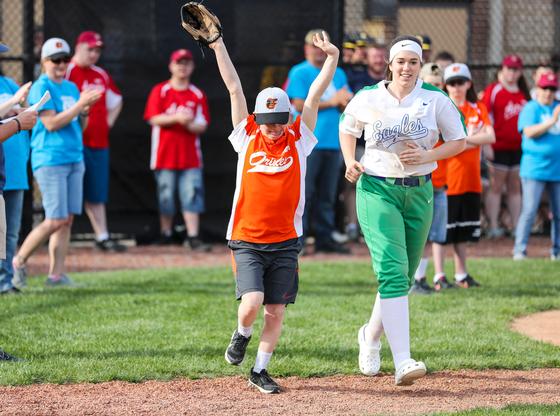 n favor of donations to Challenger League after she learned about it. She raised more than $500 and then her family put a donation page up on Facebook page and that amount is closing in on $2000.
Her reward? She gets to be a buddy, which we’ll talk about more in detail shortly.

“When I learned about that it touched my heart and it tells me she has a humongous heart. Her parents should pat themselves on the back because they have a child at that age putting kids who may be in need ahead of themselves,” said Martin. “That money will make a big difference.”
The funds allow all those kids to have first class uniforms and gifts they will get to utilize as well. Martin said the gifts also go to the aforementioned buddies. The “buddies” are often kids competing in Little League and are often students that are in high school who keep coming back to be part of the experience of helping out these spectacular youngsters.
“We’ve seen children come to the field now for 17 years just to help others; we never have to worry about a shortage of children wanting to help. It’s truly one of my favorite parts of this to watch the kids for the first time working with a child with special needs,” said Martin. “Sometimes you see they don’t know what to say or how to interact and 10 minutes later they’re communicating, high fiving and laughing. Those friendships generally go beyond the field and they usually end up lasting for, well, they just keep going.” 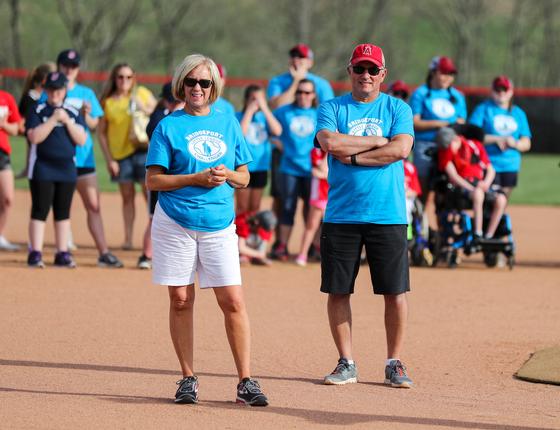 Two former buddies will be on hand Saturday for opening day to throw out the first pitch. Bridgeport High School alums and West Virginia University football players Elijah Drummond and Dante Bonamico have agreed to take part.
“We’re so proud of everything they’ve accomplished and so proud they were part of Challenger League along the way. They were really excited to be involved this year,” said Martin.
In the end, being involved is what it boils down to. It boils down for a chance to play ball and to be a kid. Something too many take for granted. I’ve said it every year that all parents of every youth sport should be required to attend one Challenger League game a year. I’d like to think it would change a lot of perspectives of why kids play sports of any kind.
“It really is about giving these kids a chance to play. Is it a lot of work my wife and myself and others? It is, but it is the true definition of a labor of love because these kids and their families inspire us and everyone that’s there,” said Martin. “I’ve never understood why a child is born with a burden to bear like we see, but those kids just deal with it and accept it.
“The beauty of it is that they’re the most resilient and truly happy kids I know,” he continued. “They just want to be about there. When you think about what all of us involved with getting those kids out there do, I’m pretty certain everyone involved would tell you these kids give us way more back than we give them.”
On Saturday, eight teams will be involved. Two teams with kids up to 11 years of age; four teams that need a moderate amount of help ages 12 and up and then two teams of highly functioning youngsters that hit the ball hard, throw it well and run well.
It’s the highly functioning group that proves the league does create miracles. A few years ago, because of the nature of the ability of those kids, it was determined that outs would be recorded, and score would be kept.
“We had just one rule and that was the first time that kids complained, parents complained, or someone got on an umpire, we would no longer do that,” said Martin. “The rule still is in place and we’re several years out and no one has broken it yet.”
No issues. Just playing with pure joy. The way it was meant to be. And why it’s the greatest athletic event in Bridgeport and beyond every single year.
Editor's Note: Top photos show action from recent years in the Bridgeport  Challenger League, while organizers Kim and Mike Martin are shown in the bottom photo.