From the Bench: How the Arrowhead, and the Streak, Managed to Survive the Indians '92 Football Season

By Jeff Toquinto on September 27, 2020 from Sports Blog

Editor's Note I; This blog ran in 2014 and includes an interview with the late Coach Wayne Jamison on the last team that nearly ended the streak of winning seasons that has now surpassed 50.
There are so many things that spell tradition at Bridgeport High School when it comes to the football program. Whether it’s the state championships, the winning seasons, the playoff appearances, the attention to detail or even the traditional arrowheads on the helmets, 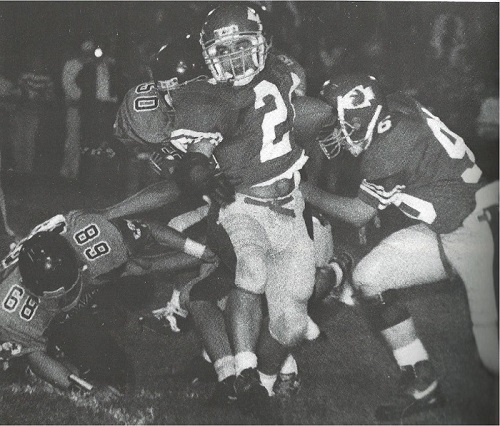 BHS is steeped in tradition thanks to decades of winning.
No one has to remind 1993 graduate Chad Hammond of that. Heck, he’s reminded of it every day.
“Seriously, someone just about every day reminds me of that season and what happened,” said Hammond.
What happened with Hammond, you see, and his teammates is something the late Coach Wayne Jamison did that he never did in his 27 years of coaching.  And understand what Jamison said back in 2014  had nothing to do with the fact that the team started the 1992 season 0-3, which is the common thought process whenever it’s discussed.
During the 1992 season – the fall portion of the school calendar year when Hammond was the Indians’ senior starting quarterback – Bridgeport nearly did something that it last did in 1967. After the 1992 season was well under way, the Indians were 0-3 and staring at the first losing season in a quarter of a century.
By that time Hammond, who had moved to Bridgeport in 1985 and witnessed as a youngster two state championship runs and several great teams, was well aware of what the tradition was. And after that 0-3 start, he said Jamison announced something that he and his teammates had actually already discussed.
“I don’t remember anyone talking about it, but I came in and told them to take them off,” said Jamison.
The “them” in this case were the arrowhead stickers on the helmets. Hammond said, immediately, the pressure was ratcheted up on a season that was already tense.
Granted, the Indians’ three losses were to no slouches. Game one was a road loss to Class AAA state-ranked North Marion by a 14-3 score. Game two was a loss to the Dave Cisar-loaded Magnolia squad by a 20-7 score and then a top-of-the-Class AA rankings South Harrison squad walked into what is now Wayne Jamison Field and put a 20-7 beating on the Tribe.
The Indians were three games in and winless. Hammond, and what was a very small senior class, was dismayed and he and the rest of the team were about to take the field for much of the remainder of the season – according to Jamison – without the iconic arrowhead stickers on their helmet.
“You talk about pressure; there was plenty of pressure because we knew we weren’t supposed to lose. We felt some the year before when we lost to (Washington Irving) for the first time in 17 years,” said Hammond. “We would lose to them again my senior year; they had a good team … You want to make the excuse of having eight seniors and playing such a tough schedule, but you knew you couldn’t do that and shouldn’t do that. Heck, all these years later I still am hesitant to make an excuse.”
Jamison remembers it clearly, he said. He added that the biggest fallacy of the entire sticker removal was that the team was 0-3. It wasn’t the record, he said, it was what led to the record that led to his decision.
“Those were good kids and I still see many of them today, especially Chad, but there was something about that team that was unusual. At times, they didn’t play to win and didn’t seem to be into it. I told them that wasn’t what Bridgeport football was about,” said Jamison. “I told them we’d put (the stickers) back on when they started playing like Bridgeport.
“The record wasn’t the problem because we’ve had plenty of games and plenty of teams that did well and lost. The problem was that we were losing because of that attitude,” Jamison said. “Too often, in practice and the games, they just seemed like they were going through the motions. The sticker removal was the price for that and a way to get their attention.” 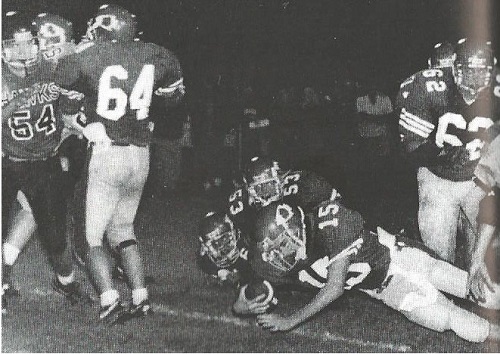 It also got the attention of the fans. And it got the attention of some parents.
“The people in the stands noticed it right away. I had a few parents, particularly a few mothers, jump me about it,” Jamison said with a laugh.
Whatever magic was contained in those arrows was needed by the helmets and also by the players. Eventually, things began to click even if the season still had some rough moments.
The Indians won three straight games – a 26-0 win over Liberty, a 17-14 victory over East Fairmont and a 17-7 win against Lincoln – to pull back to .500. But the road ahead featured perhaps one of lthe late long-time WI Coach Gene Alkire’s best-ever teams and a Grafton squad that was always tough under former Coach Mike Skinner. Although playing better, The Indians lost both games; first to WI by a 19-0 score at Hite Field and then by a 21-9 count to the Bearcats at McKinney Field in Grafton.
While the playoffs were long since out of the question, avoiding a losing season was still possible. What that meant was beating a Philip 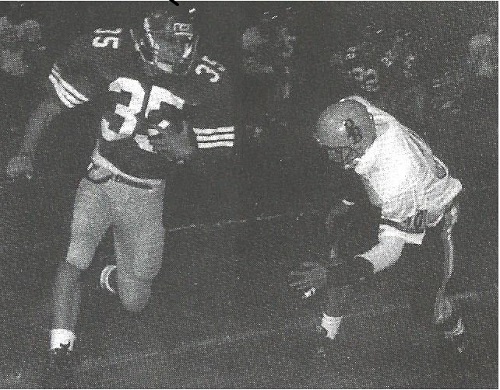 Barbour team that had managed to get an 8-3 win the season before over Bridgeport. And the final game – following a 48-7 dismantling of the Colts – was against a Class AAA Preston team that stood at 6-3 and needed a win to potentially get into the postseason.
“We all knew what was on the line,” said Hammond, who proudly will tell you that out of about 30 passes thrown from his QB spot that year he didn’t have a single interception.. “We’re 4-5 going in the Preston game. It was huge for all of us.”
Hammond, who admittedly said some of the particulars are foggy, said he doesn’t remember the stickers being back on the helmet by that game. Jamison said they were. In the end, however, it didn’t matter. The Knights came into Jamison Field and walked out on the wrong end of a 20-6 score. The win allowed a non-losing season streak that is still ongoing and dating back to 1967 to continue.
“As you get older, the stories tend to get bigger and bigger. The rumor was that I said we should remove them after throwing my helmet and other equipment around. I know we talked about it, but I can’t tell you exactly how it broke down,” said Hammond. “The bottom line was that we weren’t holding up to the expectations and eventually, however it happened, the stickers were removed. We even had guys on our teams take them off cars. As it turned out, we needed it and the streak continues to this day.”
There is one misconception Hammond quickly corrects people about. 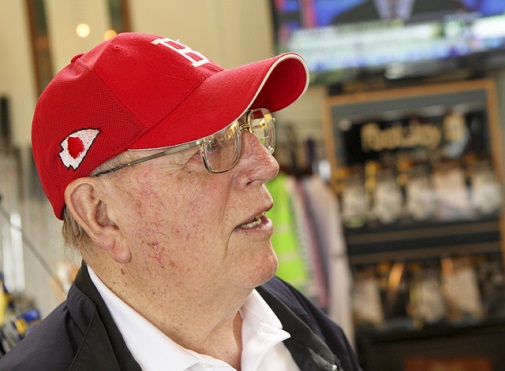 “We didn’t have a losing season. I hear that a lot and I tell people that is not the case,” said Hammond. “It wasn’t fun being 0-3, but I can tell you it would still be hard today if we had actually had a losing season.”
Today, Hammond is in the medical industry. He lives in Bridgeport with his wife Jennifer and his two sons Patrick and Sean. While he knows he’s going to hear about that season and the stickers being removed approaching three decades later, he still recalls the days in uniform with a smile.
“I remember everything and you take those memories and go with them. I made so many friends on the team that I’m still friends with today … I remember those pasta nights where Jason Lindsay (the owner of the former Gourmet Café who just passed away) would have his mother cooking and we’d all be having a good time. You have to hold on to those memories,” said Hammond.
Jamison remembers it too and doesn’t think poorly of anyone from that time.
“I know all of those boys remember what happened and I still see some of them today,” said Jamison. “I’d never give them a hard time about it, but I hope they learned something from it. Football was the game, but the bigger picture was to take what you learned and apply it in life. Your hard work was to represent something and it had value. The stickers were about that hard work and I think you’ll see those players did pretty well for themselves after they left. Maybe they did learn something in life too because they got better that year.”
Whether the stickers made it back that year or not is actually a moot point. They’ve been on ever since. And not only that, the streak that the group was trying to maintain is still alive and well more than 25 years later.
Editor's Note II: In the top photo of Scott Limer and second photo of Chad Hammond against South Harrison, the stickers can still be seen. In the third photo, showing Eric Stoneking against Philip Barbour, there is no sticker visible in the somehwat grainy photo. The arrowhead is clear on Coach Wayne Jamison's hat that he is seen frequently wearing to this day. All photos courtesy of the BHS Journalism Department and Mrs.Alice Rowe.