Back in August, the Harrison County Board of Education made it official by naming a former Bridgeport High School coach as the new head boys varsity basketball coach in Dave Marshall. Earlier this month, the BOE made it official by naming a former BHS player as Marshall’s assistant.
When Marshall and the Indians open the 2019-20 season in just a few weeks, Marshall will be joined by a player who donned the red and white on the hardwoods. He’ll also be joined by an assistant who has plenty of coaching experience across the spectrum.
There’s a good chance many of you will know his name. 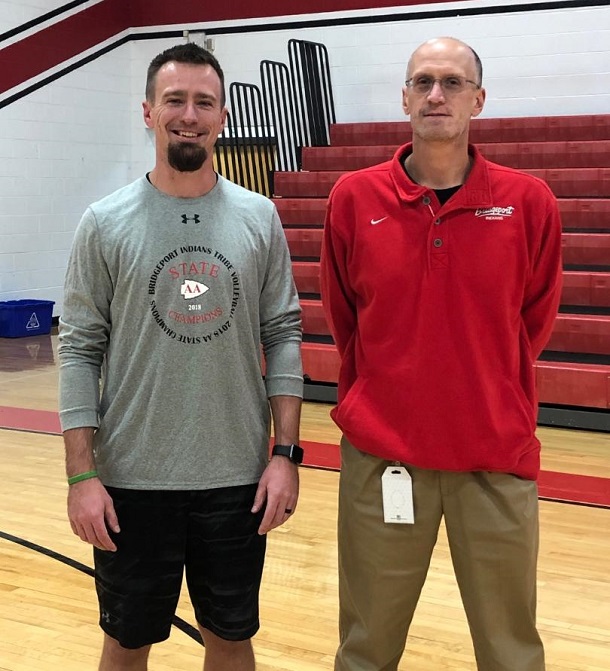 Grant Burton has been named the new assistant basketball coach for the Tribe. And as mentioned, there’s a good chance you already know him.
Burton is a 2005 Bridgeport High School graduate and a 2010 graduate of West Virginia Wesleyan where he earned his Bachelor of Science degree in Exercise of Science. He’s turned that into a career at Bridgeport Physical Therapy where he’s a PTA.
“I’m thrilled to be working with Coach Marshall and thrilled to do it in Bridgeport. I’ve lived here since I was maybe one, so Bridgeport has been my home practically my entire life,” said Burton.
Coaching, as well as involvement in basketball, has also been in his blood. While he played hoops growing up, many may remember Burton as an integral part of the Indians’ 2004-5 squad that went 22-0 heading into the regional final against Buckhannon-Upshur where they were upset in an overtime affair.
“That certainly was one of the most difficult moments ever and I certainly want to have more success with this team,” said Burton. “I would love nothing more than to get this team back to Charleston.”
Burton would latter go on to compete in track and field at WVWC. He also finished out his athletic career there as a member of the Bobcats’ basketball team.  And it was during that fifth year of college where he was using up his remaining eligibility to play his final year 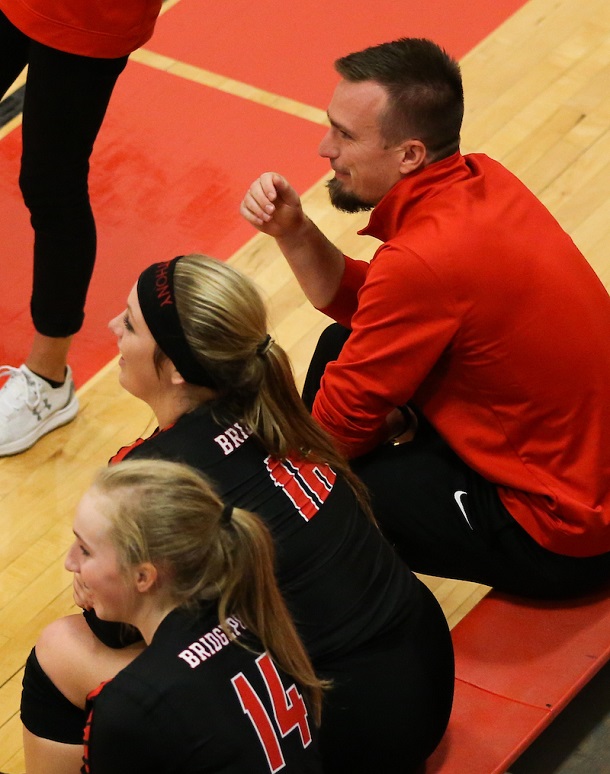 of college hoops that he got into coaching.
“I started coaching track at West Virginia Wesleyan while I was playing basketball and did that for a while,” said Burton. “That was a great learning experience for me.”
After that, he came back to his roots at BHS. In 2013, he began coaching track and is still assisting with the program that has become one of the most dominant in Class AA. There was also some basketball coaching sprinkled in as well.
“I did one year of freshman basketball at Robert C. Bryd,” said Burton, who coached under long-time RCB head man Billy Bennett.
His coaching, however, wasn’t limited to just track after that. For the last six years, he’s been coaching volleyball at BHS and helped lead a very familiar person who is head coach – his wife Ali – to the school’s first-ever state title in that sport.
“I’ve very much enjoyed that and the same time I’ve been wanting to get back into the basketball side of coaching at Bridgeport. It never worked out as when (former Coach) Mike (Robey) was there the assistant spot was filled,” said Burton. “When Dave took over, it opened up.”
Just seeing the position open wasn’t a guarantee Burton would put his hat in the ring. What did make it a guarantee was the fact Marshall was the new head coach.
“I knew Coach Marshall from taking his classes and back before the three-week periods where coaches can work with you, he coached us in summer league tournaments,” said Burton. “I also remember he always started his girls’ basketball teams in conditioning very early because he coached my sister (Sarah) and he allowed us to condition as well.”
While those were all good things, it was what else he said he knew about Marshall that made him want to be part of the next era of Bridgeport basketball. 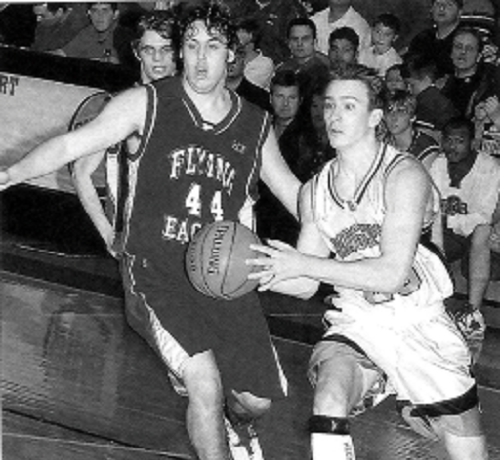 “A lot of people know Dave as a state championship coach, and that’s important, but I know him as a person that’s a good man who is good to people and his players. I don’t think I could have asked for a better person to coach with,” said Burton. “I’m hoping, and feel good about it, that it will be a good fit.”
Burton said he’s confident his coaching ideas and thoughts will mesh with what Marshall usually delivers. And for anyone that has been around Marshall wherever the former BHS girls state championship coach has been, they know he preaches defense.
“In college when we played it was extremely intense and we ran man to man from start to finish and, offensively, we ran a lot of motion and got things going in the open court,” said Burton. “From my discussions, that’s his style. I’ll have to adapt to what he’s wanting to do, which is always the case with a new assistant, but I think it’s going to be a good transition.”
Burton said he’s going to bring one aspect to the team that he thinks will make a huge difference. He said it’s something he thrived on during his playing days in high school and college.
“I’ve always been the guy who wanted to be the best defensive player. You may not score, but defense is where you set yourself apart because it’s attitude and showed you want to put the team first,” he said. “When you get everyone to take a mentality about attacking on defense and letting the scoring take care of itself with a team-first approaching, your chances of being successful increase. That’s how Dave teaches it and I’m looking forward to it.”
Editor's Note: Top photo shows Grant Burton, left, with BHS boys coach Dave Marshall. Second photo shows Burton coaching the state title volleyball team last year, while he's shown driving to the hoop in 2005 as a member of the BHS squad. Second photo by www.benqueenphotography.com. Bottom photo courtesy of BHS journalism department.