From the Bench: Julia Muller's Amazing Comeback in Track and How it Got BHS to Brink of Class AA Title

They weren’t supposed to be there.
Yet, as the final events were winding down at last weekend’s Class AA state track and field championship at Charleston’s Laidley Field Bridgeport’s girls’ team not only was in the hunt to defend their crown, but they had a chance to win it.
As the events whittled away, Indians Coach Emilee Yurish and assistant Jeff Weimer went to find Julia Muller. Muller was warming up to 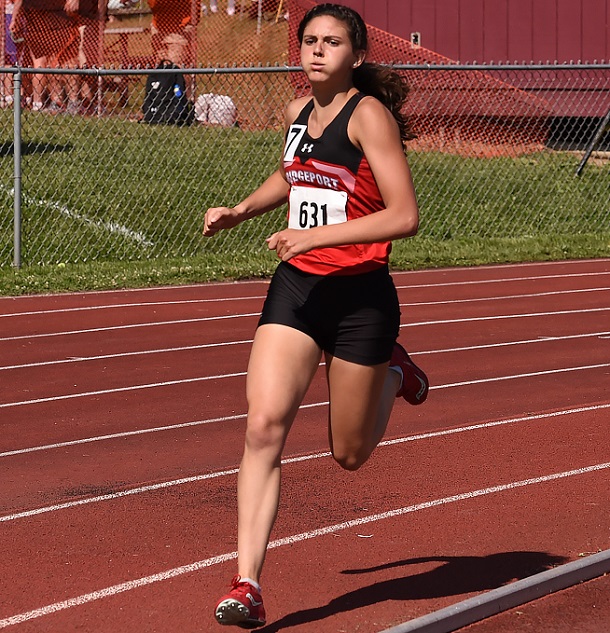 run in the 800 meter event; an event where ‘AA’ favorite Winfield had more than one runner predicted to place in the top six and earn points.
“We ran over to hunt Julia down and, at that time, we were four points ahead,” said Yurish. “We told her to stay focused because any point we get right now was going to help. When we told her, you could see in her eyes she was zoned in. We didn’t know what to expect, but we knew she was going to give it everything.”
Yurish saying she didn’t know what to expect had nothing to do with a lack of faith in Muller. After all, Muller came into this year’s state meet after winning state titles in the 1600 and 3200 meter runs last spring, having a dominant cross country campaign and signing a Division I letter of intent with Marshall University. Not knowing what to expect from Muller was based on the same thing with the Indians as a whole.
Julia Muller simply wasn’t supposed to be there.
Last Friday and Saturday, Muller was competing in just her third track meet of the season due to injury. Not only that, Muller was 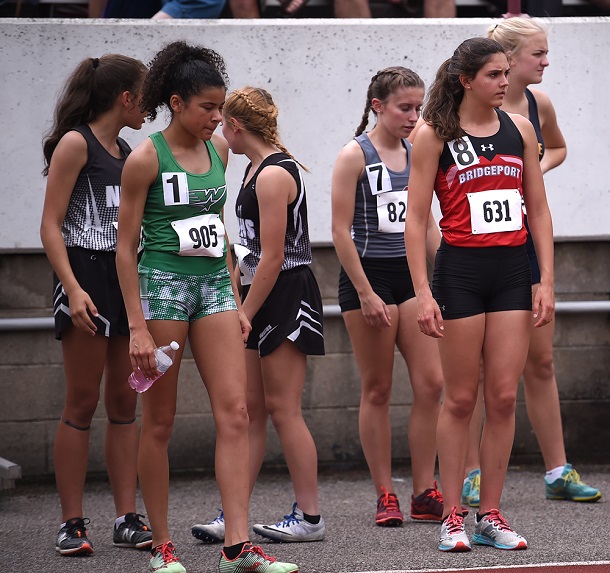 admittedly not close to her top form.
“I had a stress fracture in my foot,” said Muller. “They told me it would be two to three months with no running and I ended up not running for 10 weeks but did a lot of cross training.”
The goal to keep training was simple. Muller not only wanted a chance to compete again, but to be at her best when and if that took place. And she wasn’t simply paying her desire to return lip service.
“I would swim and bike and try to stay in shape with cross training and, as far as running, I only had three weeks before the meet to get into any kind of running shape,” she said.
While she didn’t win the 800 or the 1600 meters this year, placing in both would prove to be amazing. Muller typically runs 40 to 50 miles per week when she’s in good health. In the three weeks prior to the state meet she was in the 10 to 15 miles per week range at the top end. 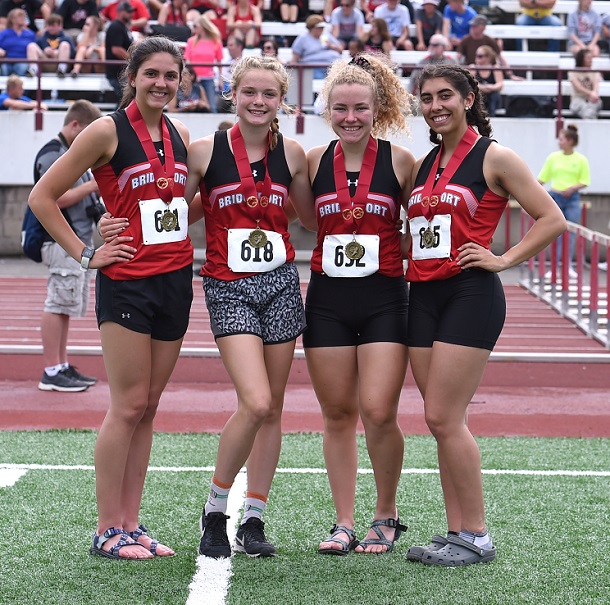 As it turned out, cross training on her own and training while injured with the team paid off. Here’s where it gets even more impressive.
Muller worked out before school to stay in shape. Not just early, but super early.
“I would get up at 5 a.m. on school days to get to the YMCA to swim by 5:30 a.m. or aqua jog. I would do training on a stationary bike and when the team would do long runs I would ride an actual bike with them to have some fun, stay in shape and still try to be part of the team,” said Muller. “Then I would go to school and to practice after school with the team.”
And the team took notice. Yurish said she has a great group of seniors and Muller’s efforts galvanized everyone, particularly the underclassmen.
“They noticed what she was doing and for her to come back and excel was miraculous,” said Yurish. “I think the young distance girls were r 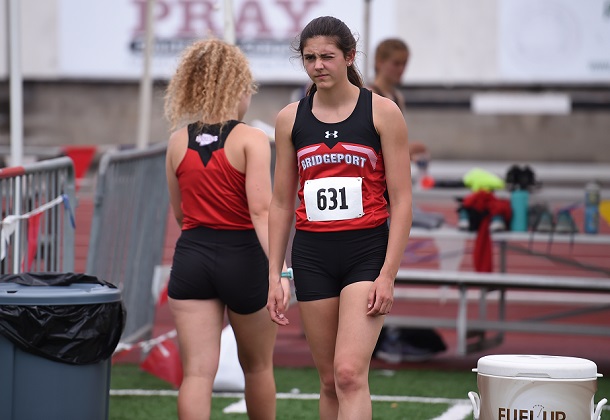 eally paying attention because I know some of the underclassmen were getting up with her to meet her and swim at Y early in the morning. I think everyone fed off of her energy and her positive attitude she displayed without really saying a whole lot. You could feel her motivation.”
Muller’s motivation was simple – to run again this year. The amazing thing is that with a Division I career ahead of her she could have easily sat it out. That thought never entered her mind. Another one, unfortunately, did.
“The thought of not running my senior year crossed my mind because they said if I wasn’t in shape by the end of the year it may not be smart to compete,” she said. “I was concerned I’d lose my fitness and be out of shape, but I was determined to be in good enough shape to compete.”
She would get there.
After the Big 10 meet and then following the regionals, Muller knew she still wasn’t at 100 percent. Her main problem, initially, was her lungs. That rounded out in the three short weeks before the state meet and her foot didn’t bother her as much as anticipated. 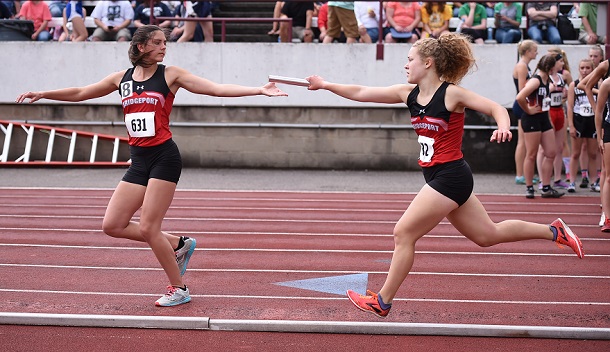 The problem?
“My foot wasn’t 100 percent, but my ankles were hurting from not running for such a long time. I’d say I was at 60 percent at the state meet,” Muller said.
The percentages didn’t change when Muller was approached by her coaches just prior to the 800 on a hot Saturday in Charleston. Yet, she knew what was needed and what was excepted.
“They woke me up when they told me we were a couple of points ahead because Winfield has a lot of great 800 runners and they all placed,” said Muller. “I knew I had to place to score some points and do it the best that I could. That talk, mentally, put me where I needed to be because it not only was important to 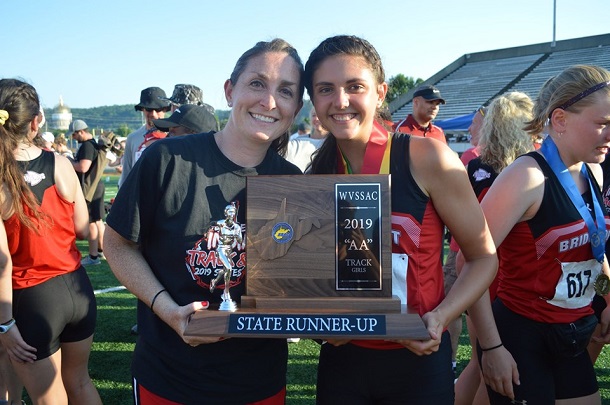 the team, but it was my last high school race ever.”
She went out in a blaze of glory. As Muller headed into the final turn of the 800, she wasn’t in position to score. That would change.
“I saw a group of five or six runners in front of me and I thought if I can get past them I can get high enough to score points,” said Muller. “I pushed it and put everything out there hoping to score.”
She did. Muller not only placed fourth but managed to break her own school record with a time of 2 minutes, and 22.98 seconds.
“Here she comes, not close to 100 percent, and beats her own school record by two seconds,” said Yurish. “Going into the last 300 meters I didn’t think she would place, but she had the biggest kickback I’ve ever seen from her and finished among the leaders.
“She represented the message we had, the seniors had, for everyone this year. Do well individually, but do it for the team,” Yurish continued. “I think that race summed up everything we were this year. It’s rare for a coach to say this, but I am so proud we finished 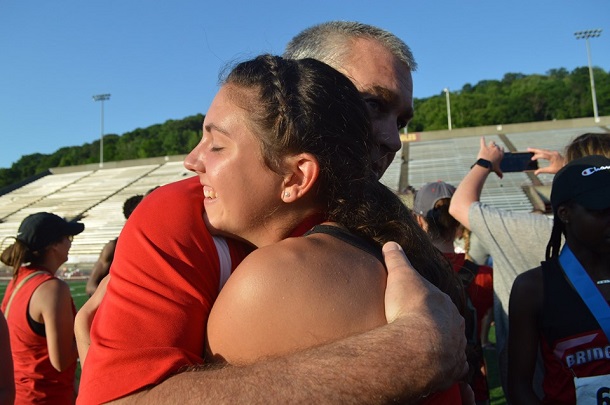 runner-up and nearly pulled it off. Julia being in the mix just made it that much more perfect.”
Yurish found nothing remotely unusual about calling the season perfect with a runner-up slot by just three points (124-121) a season after winning the ‘AA’ title. And Muller didn’t either a year after she won state titles of her own.
“I feel like this year was more rewarding than any of the state titles that I won. When you’re facing a situation where you don’t know if you can compete and then manage to do well at a high level and put your team in position to win was extremely satisfying,” said Muller. “Some may think it’s strange, but I felt like I accomplished, and even the team, more this year than last.”
In the end, it’s easy to say both seasons were a success. This year’s team proved one thing so many often look past when it comes to sports. You don’t have to walk away with the win to be a winner.
Editor's Note: Julie Muller is shown competing and with teammates  in the top five at this past weekend's Class AA state track meet in Charleston. Photos are courtesy of David Robinson of David Robinson Photography. You can visit his Facebook page HERE. Bottom photos of Muller with Coach Emilee Yurish and Boys Coach Jon Griffith from Jodi Romeo Muller's Facebook pge.