By Jeff Toquinto on December 04, 2022 from Sports Blog

My colleague and friend Chris Johnson calls him the Swiss Army Knife. The coaches in the Big 10 Conference called him a first teamer. And his own coach, Tyler Phares, had another title for him.
MIP.
For those not good with acronyms or guessing them, if you have followed Bridgeport football closely over the last few years you will at least understand what it means when talking about Ryan Hall. Phares called him the team’s “Most Integral Player.” 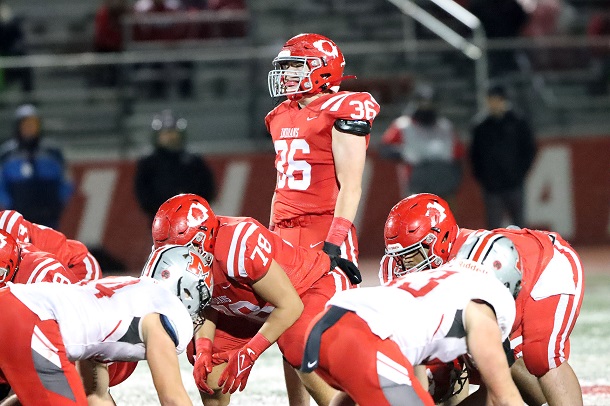 It is a compliment of the highest order. More important, it is a compliment well earned.
“Ryan is the yes sir, no sir type who helped anywhere and in whatever way he could as a player, and I’m not overstating that. He is talented and multiple things,” said Phares. “There are a lot of things that you can point to, but what stood out to the coaches is he is hard-nosed.
“He was also our glue guy because he fixed and filled whatever you needed,” Phares continued. “If we were lacking in an area, or needing someone to fill in, we knew he was the guy to throw in.”
That became apparent in 2021, during Hall’s junior season. Despite being a backup for any of the multiple backfield positions in the Indians’ single-wing attack, the Indians had a problem when the junior offensive lineman Kamar Summers got hurt and would be out the 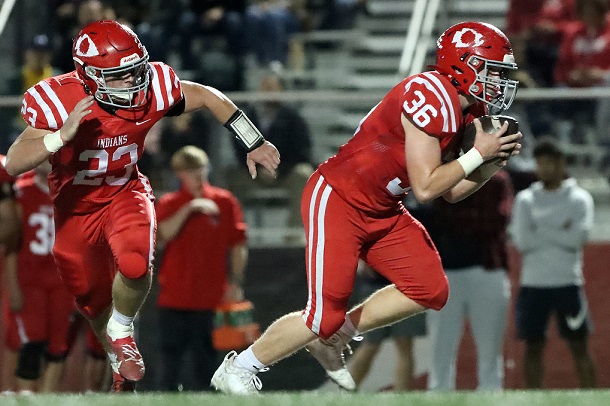 rest of the season.
“They came to me and asked me to play right guard,” said Hall. “I knew they had confidence in me because earlier they had asked me to fill in for a bit at (offensive) end because the blocking assignments weren’t getting done.”
While the end play was temporary, the move to the line was permanent for the rest of 2021. Considering he was looking at his future in the backfield, it may have stung a bit going to the obscurity of the trenches.
“Yeah, you think about running the ball because that was what I had always done. Then, you think about what the team needs,” said Hall. “After you think that, it’s an easy decision because the team is the most important thing.”
The 5’10, and then roughly 205-pound hall slid into the guard spot. Guard Isiah West moved into Summers’ position at tackle and it was on-the-job training for Hall.
“It was completely new, and you had to make an impact because we’re going to the playoffs,” said Hall. “I decided to take it as a challenge because I knew everyone was going to be bigger than me so that meant to get after it and win your battles in other ways.” 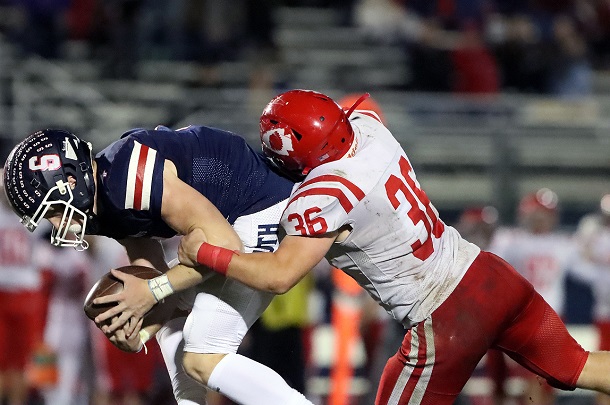 He won way more battles than he lost. Along the way, he began to appreciate what the line was doing and the faith his coaches had in putting him there.
“Ryan understood there was a rhyme and reason for what we were doing because we thought it was the right move for the team. If he knew that, and he did, he was all in,” said Phares. “We knew what we had with Ryan going into this season because of that, and it made things easier.”
Hall was back to his starting gig this season on defense, this time seeing snaps at defensive end and linebacker. He also returned to the backfield where he was almost like an additional lineman doing the dirty work that makes Bridgeport’s rushing attack go – the blocking back along with some snaps at fullback and Phares said a few snaps at tailback.
“I actually got more carries after being called up my freshman year than I did as a senior. Sure, you’re a little bummed out, but it was kind 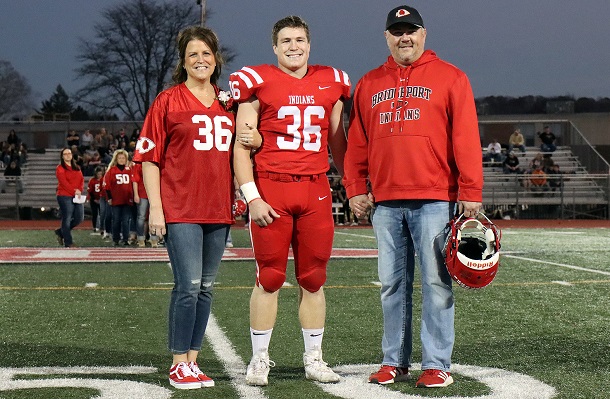 of the same deal where I knew it was good for the team,” said Hall. “In our offense, the only way to run the ball and get the yardage you need is for the line to do their job and the blocking back to do his.”
Make no mistake, Hall was good at his job – really good. The numbers, 368.2 yards on the ground per game, back that assessment up.
“When there is a hole created by the line, if I don’t kickout, then that hole is gone and the yardage to be gained is gone. What made me want to work even harder is the coaches let me know they appreciated how hard I played and always assured me I was doing good,” said Hall.
Hall said his on-field approach of hard work, discipline, and doing what was needed was shaped a long time ago by his father Roy and mother Jodi. He said it is the result of lifelong lessons.
“They held me and my siblings to a standard of being the best people and humans we can be and to always give your best,” said Hall.
That translated into another benefit, according to Phares.
“His self-discipline paid off in the locker room. He became on of the team leaders,” Phares said. 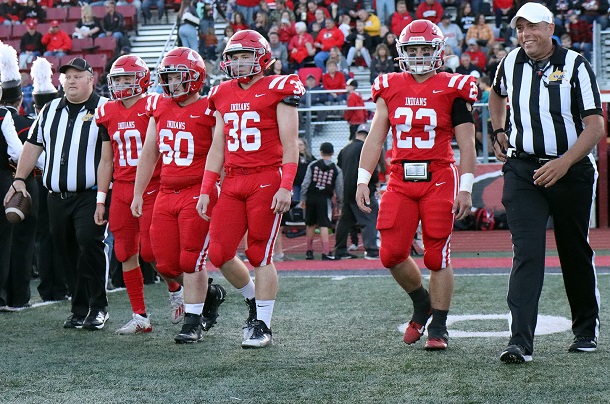 The self-discipline also paid off handsomely in the classroom. The same standard in extracurriculars his parents expected was expected when he hit the books.
“They always talk about the importance of good grades, and it absolutely translates to sports,” said Hall. “It teaches work ethic, and you see the results. You work hard in football day in and day out you also see results.”
While Hall said his football career in any official capacity is over, the work ethic has him up for another pretty important honor due to his work in the classroom, in extracurriculars, and the community.
Hall has been nominated for the United States Naval Academy. And he has been nominated by multiple members of West Virginia’s 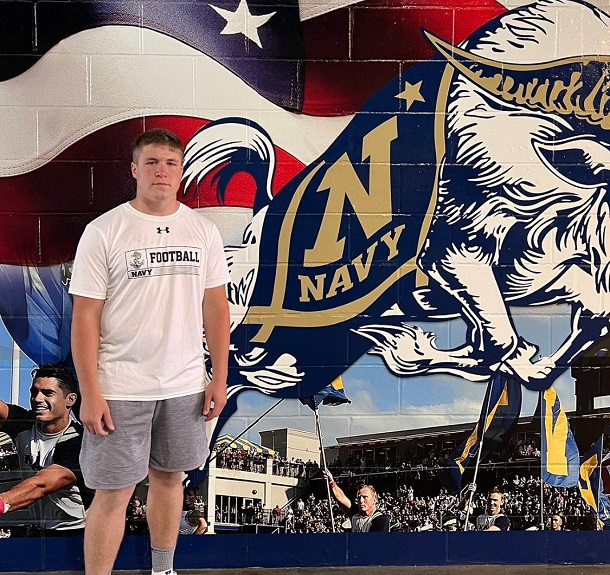 Congressional delegation – including Senators Joe Manchin and Shelley Moore Capito, and Congressman David McKinley.
If he is accepted, Hall wants to get into the Naval Academy’s medical program. He knows it will be difficult.
“Only a slim number of students get into the program, and if I’m fortunate enough to get into the Academy I will try to do that,” said Hall.
Hall said his goal – whether getting into the program at the Naval Academy or not – is to go into the medical field. He said he does not necessarily see himself turning the possible acceptance into the Naval Academy into a military career but is looking forward to meeting his military commitment if brought aboard.
“The Academy requires a lot of discipline and, honestly, you learn so much about discipline going through Bridgeport football,” said Hall. “The style demands you to be tough, to continue work on it, and be good at it.”
As for Phares, he thinks Hall would be a perfect fit in the Naval Academy.
“He was a great football player, but he’s a better student-athlete and if he ends up in the Naval Academy he’ll succeed there. You can’t go wrong with a kid like Ryan,” said Phares. “If he doesn’t go there, he’ll succeed at whatever he does and wherever he goes. He can fit into anything he wants to.”
He sure can – just like a Swiss Army knife.
Editor's Note: Top photo shows Ryan Hall surveying the offense prior to the snap of the ball, while he's shown getting a rare carry from his blocking back spot in the second photo. In the third photo, Hall makes a tackle when the Indians upended Class AAA top-ranked Parkersburg South. In the fourth photo Hall is shown with his parents on senior night, while he's shown as one of the team captains prior to the start of the Robert C. Byrd game in the next photo. Bottom photo, courtesy of Ryan Hall, shows him during his visit to the Naval Academy. All game photos by Joe LaRocca.