From the Bench: Meet the Newest Members of BHS's Football Staff who's Not Actually New to the Program

By Jeff Toquinto on September 25, 2022 from Sports Blog

It has kind of gone under the radar, but Bridgeport High School’s football team has a new member on its staff. And in a way, it is a repeat member.
Understand, it is definitely on the radar of the team’s coaching staff. The same could likely be said about the players.
For every game so far this year, and a handful of practices each week, Emilee Stout Yurish is on the field. She has assumed the role of 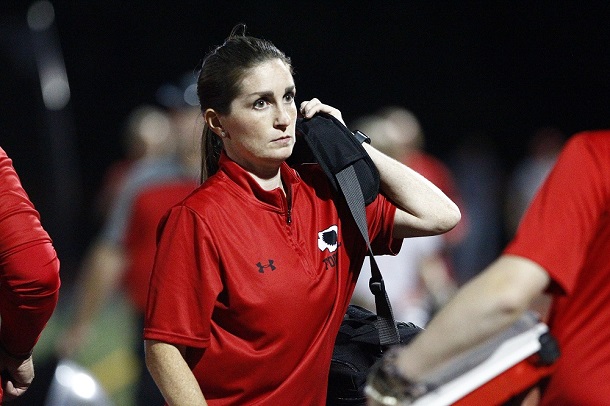 athletic trainer, something she actually did during the postseason in 2021.
While the role is still relatively new to Yurish, being involved as an athletic trainer and with teams at the prep level is far from new. In fact, even prior to last year’s playoff run on the sidelines, Yurish had been an athletic trainer before.
In fact, she spent three years serving as the athletic trainer for Robert C. Byrd High School. That came during the 2010, 2011, 2012 calendar years. And she stepped away to do something else that has made her familiar with high school sports – she became a coach.
“About that time, I figured out I liked coaching, and I stepped away,” Yurish, LAT/ATC. “I filled in a few times in the years after that at BHS, but I was involved in coaching.”
Quite successfully, I might add. Yurish, who teaches health and driver’s education at Bridgeport High, coached cheerleading and girls track for the Indians. The cheerleaders made it to the states and were often a contender for a championship, while the track team not only was a contender, but state title winners.
How successful?
The track team won titles in 2014, 2016, and 2018, while managing to finish as the runners-up in 2013, 2015, 2017, and 2019. The cheer squad, although not landing a title under Yurish, finished in second place in 2013 and 2014.
It was after the 2020 season that Yurish hung up the whistle and focused entirely on her coaching with little thought of returning. It was that year Yurish, and her husband Matt welcomed a child into their family. 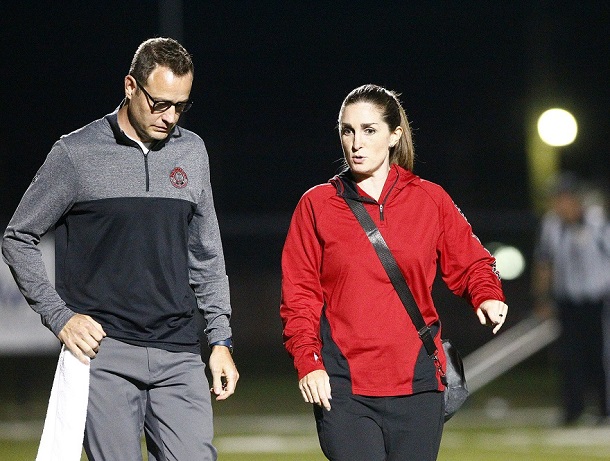 While she loves being a mother, Yurish never lost her passing for coaching and she stayed current as an athletic trainer – even though she had no plans to return. That changed last year when BHS needed her skill set in the postseason and the same need came around this year.
The only difference was last year would be a four-week commitment at best. A full season of games can go from late August into early December. Although he late run last year was every day, there was no way she could do that for that time frame and make things work at home – it was simply too much time.
“When it was offered to do it Wednesday, Thursday, and Friday it really was hard to say no,” said Yurish. “I figured I could make it work and would not have the burden of the entire week. On top of that, I really wanted to help the school out.”
So, she is back. How long that will last is anyone’s guess – including Yurish’s.
“Let’s just say with this, my life is on a year-to-year basis,” she said with a laugh. “It’s a big-time commitment. I left coaching because of the time factor, and I don’t want to lose out time with my son. My husband has a time-consuming job himself … you have to find a balance with family life. I don’t know if I want to do this full time ever again, or even like this, but I will figure it out when the time comes when it needs to be figured out.”
As for the athletic training part of things, she already had that figured out. Coach Tyler Phares is thrilled to have someone on his sideline with more than just a trainer’s skill set.
“Emilee is top notch, and knows what she’s doing,” said Phares. “What she brings that not every athletic trainer can bring, and we’ve had a great run of trainers here.
“She’s a former coach and she knows when a student-athlete is pushing themselves when they shouldn’t be,” he continued. “Her athletic 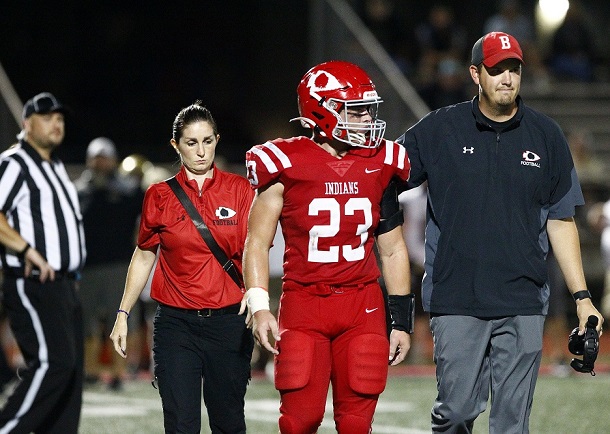 background and coaching background let her know what to look for if a kid is banged up and not anyone to know. She can tell; she knows what to look for.”
Stout said Phares was not wrong in his assessment. She also said being a teacher in the school is a benefit.
“I do see things differently a little bit, but not just when they’re playing,” she said. “I try to see what’s going on, maybe even mentally, if a kid stressed from something at school or beyond school. I saw a lot of that, particularly coaching so many girls in track and boys, too, since we shared a lot of responsibilities.
“What you want is the trust of the students by making it personal, and relating to the kids, beyond watching over or preventing an injury,” she continued. “I think being a teacher her helps because I am a familiar face who has a relationship already with a lot of those playing.”
While that has helped the transition and the short week helped in making her decision to return, she said there was another factor. And that was a positive experience in 2021 with the same team during her playoff run.
“I really got to see what the coaching staff was like and working with them last season my decision that much easier,” she said. “They made me feel welcome, they respected what I did, and understood that I knew my responsibilities and what my job entailed. As a trainer, you expect the staff to take what you tell them to do will be acted on, and that is the case with the entire staff. That was another reason it was hard to say no.”
Along with the training, coaching, and former standout athletic run at BHS as a student, Stout comes from a family well known for athletic success and hard work. She expects that of herself and of those she is working with.
“I’ve always been intense, back when I played and as a coach, and I carry that with me as a trainer. I want things done timely, no fooling around, because we’re dealing with these students’ safety,” she said. “The other thing, if you’re hurt and you’re on the sidelines and work on something else, then you need to be doing that.”
So far, so good. The Indians are again making noise and hope to make more noise by getting back to the Class AAA postseason. And she does not mind if that last into December.
“I’ve been here for a month, and I enjoy it to the point I hope these kids go as far as they can go,” she said. “The kids are just great to work with and that’s a compliment to the parents. I guess that’s another reason I came back.”
I feel safe to say on behalf of the coaching staff, program, and fans, we are glad to have you back.
Editor's Note: Top photo shows Emilee Yurish at one of the earlier games this year, while she's shown with team physical therapist Jack Spatafore in the second photo. In the third photo, Yurish is shown walking off the field after helping BHS player Phil Reed as Coach Tyler Phares walks with them.