From the Bench: Robey, Washington Bring Distinct Yet Similar Backgrounds to Roles at New Rec Complex

When the hiring process began for The Bridgeport Indoor Sports and Recreation Complex, there were not any guidelines as far as who was to be hired and where they were to come from. Officials emphasized the best person for the job would be brought aboard.
At the same time, city officials were hopeful that some of those looking to make a career with the soon-to-be-open $50 million facility would have some local ties. Bridgeport Parks and Recreation Director Joe Shuttleworth and City Manager Randy Wetmore, among others, anticipated that would happen.
As it turns out, they were right. In fact, two of the key hires have strong local ties. One with lifetime ties to Bridgeport and the other with long-time connections to North Central West Virginia. 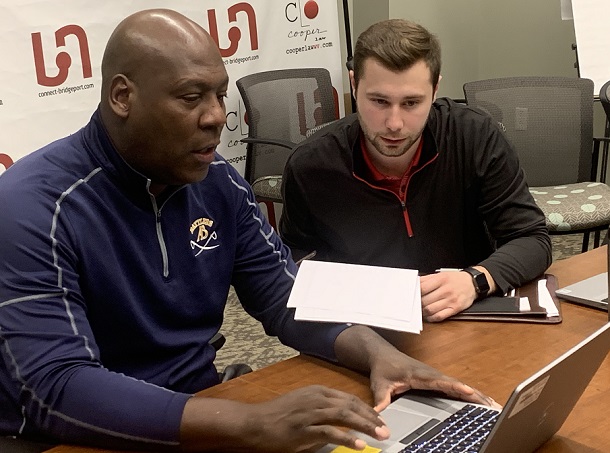 Both will handle the role of sports managers, which involves handling the day-to-day planning the organization will for the sports programs offered at the facility. In other words, they will be in very high-profile positions – and I am certain it is not a problem for either.
The sports managers are Bridgeport High School graduate and Chase Robey and Daron Washington, who is a native of Cleveland, but spent years playing and coaching at nearby Alderson-Broaddus University and also is seen regularly as a basketball official.
They are different, but the same. Robey is 24. Washington is 49. Robey is from rural West Virginia and Washington is from, as mentioned, Cleveland.
Yet, they both believe they have found their careers. They both believe they have found it after initially thinking it was going to be long-term in the coaching world. Robey played in games where Washington officiated Instead, they are now a tandem – and one that gets along fabulously. 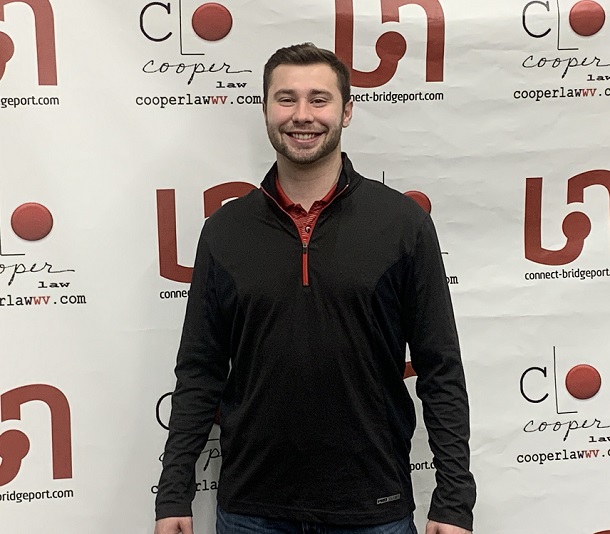 “It’s been very easy to mesh with him from our experiences. We both were involved with coaching at the Division II level (Robey at Salem University) and we both love golf,” said Robey. “I’ve known Daron from when he refed my games. We actually had a relationship, and I am thrilled to be working with him … and the team they’ve assembled so far that is full of outgoing and fun personalities.”
Washington has similar complimentary words.
“He and I have been a great fit, but I think he’d tell you it’s like that with everyone here. He’s hungry like I am to do big things for this community,” said Washington. “The nice thing is I’ve been in management for so long, and being older, he’s receptive to anything I may tell him, and he’s certainly helped me along the way as well.”
Parks and Recreation Director Joe Shuttleworth echoed plenty about the cohesion.
“Chase and Daron have the sports background, the intelligence and, most important, they tie it in with local knowledge,” said Shuttleworth. 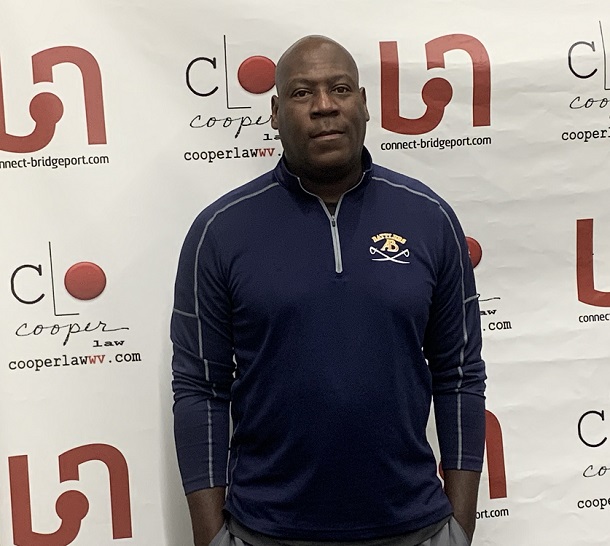 “We have been assembling a strong team, and these two are certainly part of it.”
So, who led them both to a home at The Bridge just off State Route 131?
For Robey, a 2015 BHS graduate and a 2019 WVU graduate (sports management) who got a Master’s in Business Administration while coaching at Salem, the opportunity fell in place with his degree and with a feeling it was time to get out of coaching.
“My priorities changed with coaching. I didn’t want to see myself bouncing around from Georgia to New York. I wanted to settle down long term,” said Robey. “Not knowing my future was a problem. This allows me to plan for a future here. This allows me to have a career in my backyard.”
He got the job, in part, because of a degree his father gave him a hard time about. Robey said his father Mike did not like the idea of a sports degree.
“He hated it to the point that to make sure he was on board I told him I would get a graduate assistant’s job and get a master’s degree in something outside of sports if it didn’t work out,” said Robey. “That worked out perfectly because the degree my dad didn’t want me to get qualified me for this job and having the master’s added to the resume. I still enjoy telling him I have a job because of the degree he didn’t 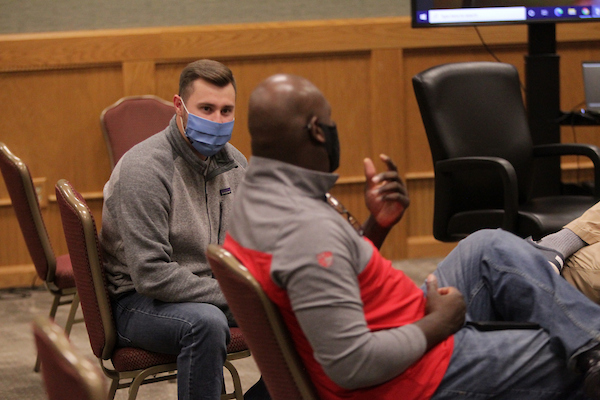 want me to get.”
Washington’s path is different, and not just because the age. He left Cleveland State to transfer to Alderson Broaddus and then ended up coaching there for 10 years. Along the way, he earned a sports management degree.
But there was more. Washington sold insurance for about eight years, worked at WBOY, spent time working at Bel Meadow, and has served in another very public role. He has been a basketball official for 13 years.
“Some of the coaching philosophies I used will mesh with what we’re doing here. Part of what we’re doing is tutoring youngsters that come here, hopefully providing a path to places such as college,” said Washington. “The whole thing is exciting, part of it is because what we’re doing is a great unknown. We can kind of see it, but we’re still putting programs together and ordering things. It’s like a canvas and as we move ahead, we get to be the artists.”
Robey agreed.
“One of the best aspects is getting to see things unfold from the ground up,” said Robey. “Daron and I are going to do everything we can to make sure what’s in place benefits the entire area. It’s just a matter of time.”
Editor's Note: Top photo shows Daron Washington, left, and Chase Robey going over particulars of The Bridge on the computer. Second and third photos are shots of Robey and Washington, respectively. Bottom photo, by Ben Queen Photography, shows Robey listening as Washington makes a point at a Bridgeport City Council meeting in February.