There is an old saying that adversity does not build character, it reveals it. If the saying holds water, there has been plenty revealed about the character of Bridgeport High School senior football player Mario Galindo. And what is revealed is exactly what you want from anyone manning your roster.
Long before he will take his first official snap in a varsity football game, Galindo had the opportunity to throw in the towel. Not just once or 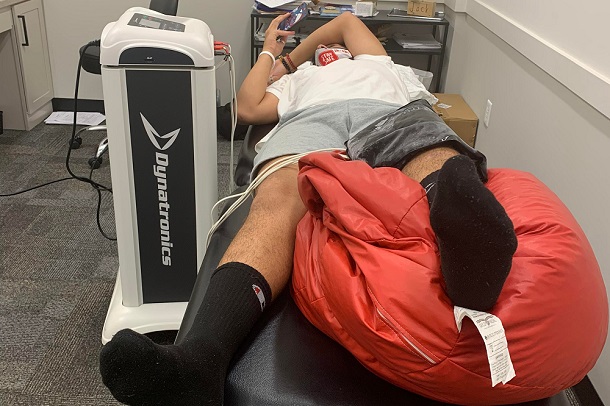 twice, but three times where those around him might have given him a pass on all three and those around him would have almost certainly given him a pass on his most recent dose of adversity.
Yet, Galindo has shrugged the past off. He is ready for the future, which as a BHS football senior officially starts Monday, August 1, which is tomorrow for those reading this blog.
It is a bit short of a year ago, on August 20 of 2021 to be exact, when Galindo was in the process of getting to where he wanted to be to a place where no student-athlete wants to be. The place he arrived at occurred during an intra-squad scrimmage at Wayne Jamison Field.
“We were running a play when it happened and I didn’t get hit,” said Galindo. “I’m running up the field through a gap and see the ball carrier, turn, and plant my foot. Maybe I didn’t pick it up like I should have, but y foot got stuck and I heard a snap. Then, I’m on the ground and can’t get up.”
He was unable to get up because he could not put weight on his leg. The reason for that, unknown at the time, is that he had a lateral 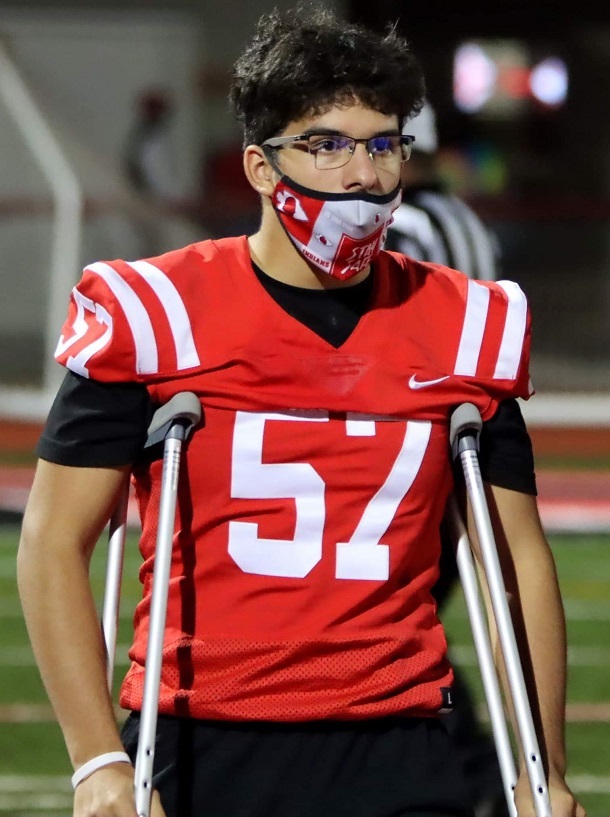 meniscus tear and a lateral dislocation of his left patella (kneecap).
It would be days before he would find out, but Galindo knew by the swelling, pain, and difficulty maneuvering on his leg that an upcoming MRI would not be good. Unfortunately, he was correct.
“It was frustrating, and it didn’t seem fair because I was learning, starting to get better, and felt I was in position to see my first varsity game time and help the team,” said Galindo. “When I officially heard the news, I knew the season was done.”
And it is here he could have called it quits. It was here where he could have looked those he cared and respected the most and said he done. None of that happened.
Instead, less than a month later, he was at Mon General where surgery to repair his knee was done by Dr. William Post.
“Surgery was good, but I don’t remember much. Not only was it really early in the morning, but they drug you up and you go to sleep,” joked Galindo. “What I do remember is when it was over, I wanted to play again, and was told with therapy I could. Then I remember therapy; a lot of therapy.”
Galindo is not the first, and will not be the last, to be sent to Bridgeport Physical therapy. For heavy portions of most of the next five months he teamed with Jack Spatafore and his staff and the White Oaks location. 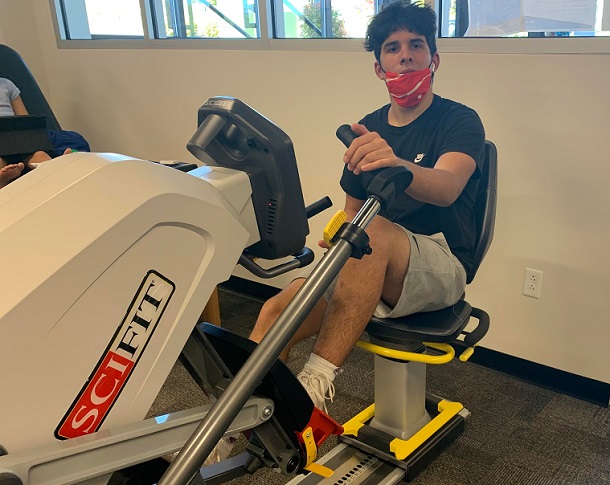 “I was there two to three times a week for the next five months and have been doing stuff since then as well,” said Galindo. “About the only thing I have any problems with now are some issues when I do squats and I feel it my left leg. Other than that, I feel good to go.”
On Feb. 21 of this year, Dr. Post released Galindo to resume activities. And that is just what he has done.
“The first thing to get back into was weight training and that was rough,” said Galindo. “My leg didn’t feel right because of lack of muscle. Honestly, more than once I felt like I pulled something or maybe tore something and would call Jack because I was anxious about it. The good news is that there have been no real problems.”
While he was working out, the first real return to the football field came in June. Galindo was a participant in the Indians’ three-week summer session, and he was glad to be back.
“It was fun. It made me realize everything was worth it, really worth it, and not just the injury,” said Galindo.
What he means by “not just the injury,” was opting to play in the first place. Despite what some may believe, not everyone comes out of 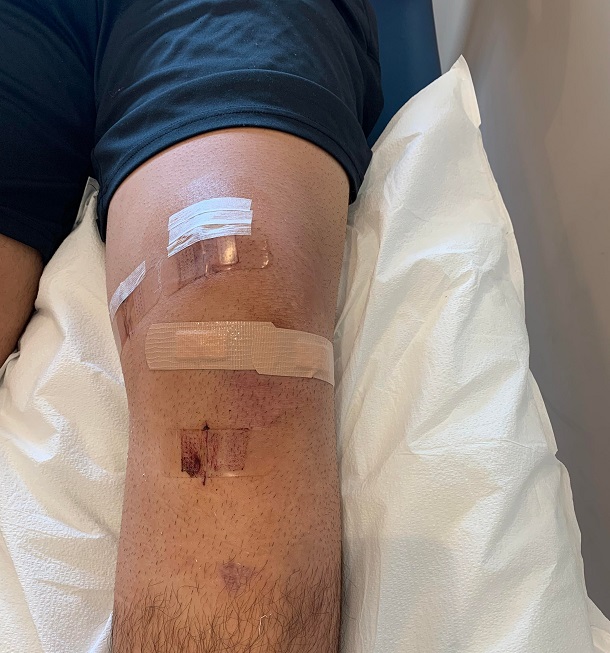 the womb in Bridgeport with a desire to play football. Galindo certainly fit that mold.
Not only did he first don the pads at any level as a Tribe freshman, but he was also not a fan of the game.
“When I played as a freshman, I was playing a sport I knew nothing about. I never even watched it,” said Galindo. “A lot of my friends played as kids, but in elementary school I played soccer and I swam.”
While that may seem unique for the 5’11, 210-pound Galindo who figures to be a big asset on both the offensive and defensive line this year, there is a bit more to it. Galindo’s path to football was accented by coming up short in other sports in middle school.
Although he was active in recreation soccer and basketball leagues, he did not make the Bridgeport Middle School team as a seventh grader and the soccer team he eighth grade year. Instead of taking the “hey, he tried” route, he bottled up the adversity in those two situations and found another route.
“I decided to wrestle at BMS, and I didn’t know anything about it and, actually, didn’t even know we had it as a sport. My stepdad (Chris Span) encouraged me to do it … I didn’t know if I could do it, but I knew I didn’t want to do nothing,” said Galindo. 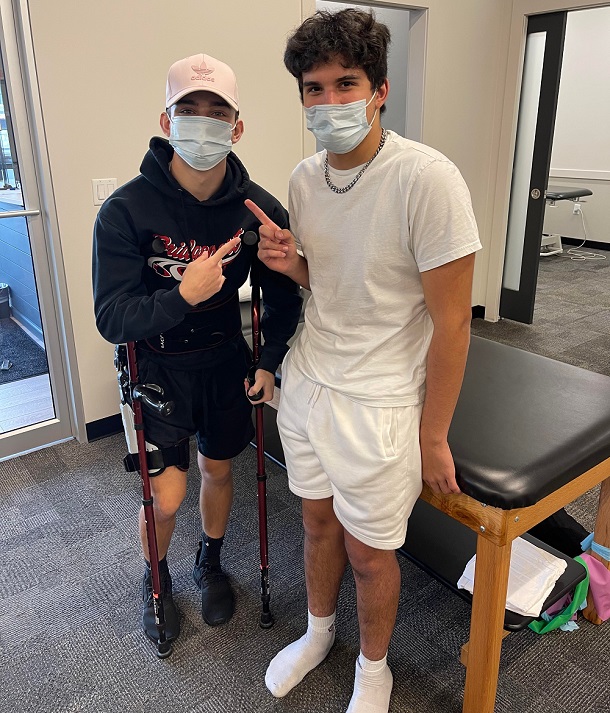 Wrestling, as it has done for many football players and those who participated, forced Galindo to get into shape and figure out his body. From there, things progressed rapidly, despite only wrestling one year in high school.
“The big thing was I gained self-awareness about my abilities, my strengths, and weaknesses. I also learned wrestling really helps you out in football,” he said.
Wrestling at BMS did one other thing. Many in his social circle, including fellow wrestling teammate Kamar Summer, encouraged him to go out for football. And he did.
“I came out and I knew nothing outside of how to get to practice,” he said. “It took me a long time to adapt.”
The good news was the coaching staff knew it. The better news was the coaching staff was led by Tom Hilton, a former lineman and line specialist who has coached for decades.
“Coach Hilton had me at defensive tackle and in my last freshman game I got to play some center. I played on defense only because I didn’t know the plays on offense,” he said. “The strange thing, which was a good thing, is I wanted to get better.
“If you’re not good at something, and I wasn’t that good, you’re not going to have fun at it and want to quit,” he continued. “I just wanted to 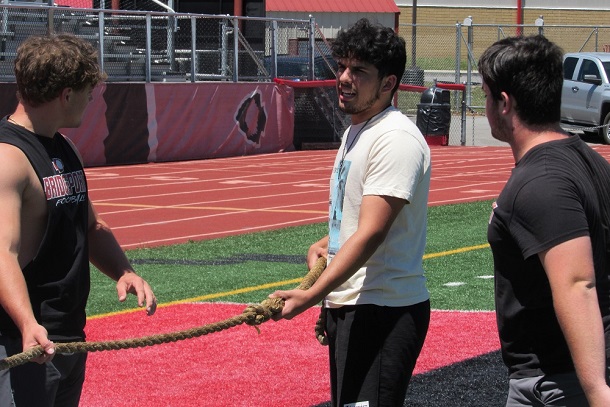 get better to appreciate the game and have fun.”
The improvement came strongly as a sophomore as he still worked with Hilton and now had the tutelage of long-time BHS Coach John Cole who as an assistant and as a head coach has always worked with linemen.
“I got better and more comfortable playing defensive in and started learning left guard as (upperclassmen) Tanner Saltis was showing me the ropes along with Coach Cole and Coach Hilton,” Galindo said. “I was getting the hang of it and learning and if you want to learn, they want to teach.
“The funny thing is knowing I was so far behind that when some yelled ’46,’ I’d ask the guy next to me what to do,” he continued. “It was clear why I didn’t play on offense by freshman year. You have to be mentally and physically ready to play on the offensive line.”
By the time the 2021 season began, Galindo knew what to do, but never had a chance to show it. His knee would not cooperate in that August scrimmage.
“Yeah, not making it to the first game seemed unfair, but that’s behind me,” he said. “I’m ready to play some varsity football and make the most of it.”
He also is ready to give advice for someone who may not make a team and wants to give up.
“Just keep working hard and don’t give up,” he said. “If you really want something and are sure you want it, just do what you have to do to make it happen. It can be done. I’m proof of it.”
Galindo knows he is walking proof. Tomorrow and the rest of 2022 everyone else will know it too.
Editor's Note: Photos show Mario Galindo during various phases of therapy, including one with teammate Cam Cole who is shown on the left of that photo, while another photo above shows his knee post surgery. Galindo is also shown on the sidelines on crutches during a BHS game last year in a photo courtesy of Johnny Bryan. Bottom photo shows Galindo enjoying some fun in the final day of the three-week June summer session.